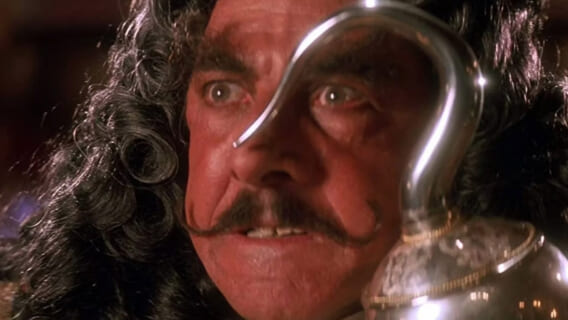 Public domain horror is all the rage. While horror fans are still anticipating the sheer excess of the forthcoming Winnie the Pooh: Blood and Honey, The Hollywood Reporter recently revealed director Rhys Frake-Waterfield is preparing for a disturbing take on Peter Pan with the aptly titled Peter Pan: Neverland Nightmare.

A viral success, Winnie the Pooh: Blood and Honey has benefited considerably from the digital word-of-mouth. Alongside an expanded production for additional shoots to really make sure that 100 Acre Wood bloodshed is as good as can be, Frake-Waterfield has secured a nationwide, one-day distribution through Fathom Events in US Theaters. On February 15, horror fans can bring the whole family together for a bunch of latex mask carnage featuring seminal childhood icons.

Now, whether Blood and Honey becomes a cult classic or a disposable bit of high-concept malarky in the vein of Jack Frost 2 remains to be seen, though there’s no denying Frake-Waterfield has capitalized on a pretty remarkable opportunity. In Blood and Honey, Pooh and Piglet rampage through town after Christopher Robin abandons them to go to college. Whether the concept and grim curiosity is enough to sustain an entire feature is another matter entirely, but if it ends up working out well, fans can rest easy knowing Peter Pan is the next childhood icon to get a twisted adaptation.

What do you think of Peter Pan: Neverland Nightmare? It’s a heckuva title, I’ll give it that. Are you excited for it? Do you plan to additionally catch Blood and Honey? Let us know on Twitter via @dreadcentral!