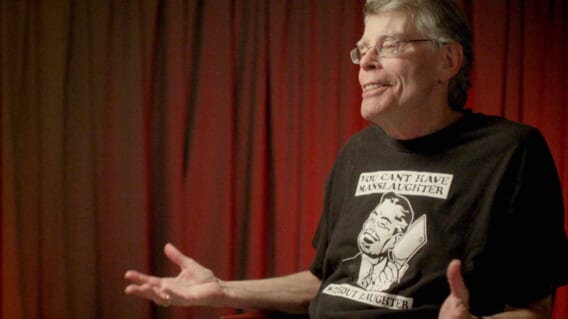 A ton of scary content is being unleashed on Netflix this month. From Rob Zombie’s The Munsters to Guillermo del Toro’s A Cabinet of Curiosities, there’s no lacking of Halloweentime fun on the premiere streamer. Just in time for October, the number one most popular horror film on Netflix is now Mr. Harrigan’s Phone, their latest Stephen King short story adaptation. At the time of writing this article, the film is the second most popular movie playing on Netflix in all of the USA.

As mentioned, this is not the first Stephen King short story Netflix has turned into a feature film. They’ve churned out a number of solid films from his short fiction, including Gerald’s Game, 1922 and In The Tall Grass.

Mr. Harrigan’s Phone tells the tale of a boy who befriends an enigmatic billionaire. When the older man dies, he’s buried with an iPhone. It’s not long before the boy starts to receive voicemails from the man in the grave. The novella itself is a frightening contemplation about friendship you won’t soon forget.

Ryan Murphy has teamed up with Jason Blum to produce the title for Netflix. Together they have hired the celebrated director John Lee Hancock (The Blind Side) to write and direct.

Donald Sutherland and Jaeden Martell (IT) star together in this sure-to-be-perfect October visitation. Sutherland takes on the role of the titular “Mr. Harrigan.” Kirby Howell-Baptiste (Barry) also stars.

Check out the trailer for Stephen King’s Mr. Harrigan’s Phone

Lastly, will you be watching the Stephen King adaptation of Mr. Harrigan’s Phone on Netflix? If you have, what did you think? Let me know on Twitter via @joshkorngut. I’m always around to chat about all things Stephen King!