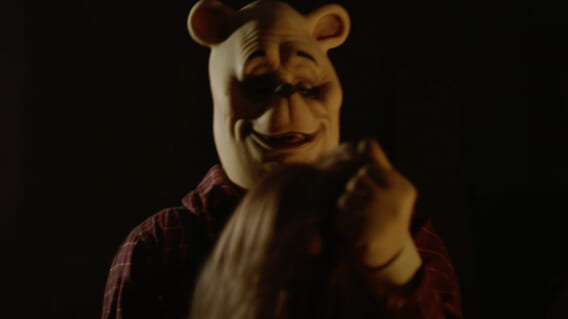 Today we’ve scored an exclusive first look at the trailer for Winnie the Pooh: Blood and Honey from ITN Studios and Jagged Edge Productions. This new take on the childhood classic sees Pooh and Piglet turn wild and go on a bloody rampage after being abandoned by Christopher Robin. The trailer promises carnage, camp, and is everything we were hoping it would be and more. Check it out below.

Winnie the Pooh: Blood and Honey first went viral when word of the controversial horror film first hit the Internet earlier this summer, and initial fan response ranged from pure excitement to total outrage. All of this conversation surrounding the slasher film only further piqued our interest in checking out the final product. And today we’re one step closer with the first official trailer.

Rhys Frake-Waterfield is the writer-director behind Winnie the Pooh: Blood and Honey. The filmmaker recently sat down with Dread Central’s Development Hell podcast to reveal some of the nastier moments you can expect to see in this mysterious new horror film. The highly anticipated title is a co-production between Jagged Edge Productions and ITN Studios. Frake-Waterfield is producing alongside Scott Jeffrey while Stuart Alson and Nicole Holland executive produce. The cast includes Amber Doig-Thorne, Maria Taylor and Danielle Scott.

Winnie the Pooh originated as a fictional teddy bear created by author A.A. Milne and illustrator E.H. Shepard. In the 1960s Pooh became a household name when Walt Disney Productions turned the character into an animated movie star. Pooh then entered the public domain earlier this year. Now the bear is back and he sure seems pissed.

Check out the official trailer for Winnie the Pooh: Blood and Honey

Lastly, what do you think of the trailer for Winnie the Pooh: Blood and Honey? Will you check out this mysterious horror movie when it’s released? Let me know over on Twitter via @joshkorngut. I’m always around to chat about all things indie horror!