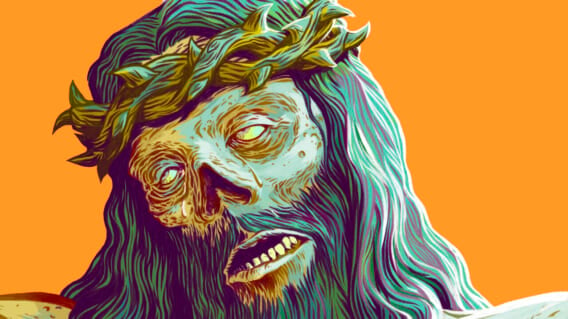 This past April Fool’s Day, director Adam Wingard gave us all a little treat — The Guest 2! Finally, the long-awaited sequel to his incredible 2014 action/horror flick starring Dan Stevens, is here for us to experience… Well, sort of.

Wingard didn’t actually film it or anything. He just released the soundtrack to the proposed flick, allowing us to use our imagination to fill in the blanks. Better than nothing, I suppose.

The soundtrack is pretty damn good, so there’s that!

However, Wingard isn’t the first creator to put out a soundtrack sans the movie. Far from it, actually. Case and point, Gerardo Preciado has been doing this kind of thing for years! Under the name Ancient Order of the Droids, he’s been releasing soundtrack after soundtrack for films only existing in the minds of him and the listener.

How did Preciado gain such inspiration to create music for imaginary movies? Good question, I’ll let him answer that:

“I started the Droids in 2012 because I love electronic instrumental music. I’ve had bands and other projects before, but with this band, I wanted to get into film scoring. I released a couple of EPs with the idea of getting an opportunity to get my music into indie horror flicks. I quickly realized it was much harder than what I thought it would be. So instead of giving up, I decided that if no one was going to give me the opportunity of scoring a film, I would make the film up myself.”

Preciado has made an extensive library over the years, which is why I’m surprised I just heard about it now. Especially with how well-done it all is! As I said a while back, I’m not a music critic, so I feel the best way to proceed is to just show you some of Preciado’s work rather than talk about it. Let’s see what’s on the docket:

– Giallo!: C’mon… Did any of y’all expect the guy named “GIALLO Julian” not to put the album named GIALLO! on the list first? Described as a “70s disco soundtrack inspired by Giallo films”, this release has the honor of being on vinyl. The soundtrack includes such groovy tunes as Giallo!, Metropolitana, Tortura, and Morta Viva.

– Dracula: The College Years: The soundtrack to an imagined “80s raunchy comedy” starring Dracula, who’s attending college and presumably getting into some zany hi-jinks before settling down for a life of high-stakes real estate deals. This album features such pieces as My Dad’s Castle, Midnight Munchies, My Roommate is a Werewolf, and (my personal favorite) Her Name is Vanessa… Helsing!

– My Little Slasher: This is a fun one! The idea behind this soundtrack is an “80s horror-comedy that combined E.T. the Extraterrestrial with the Friday the 13th series in which a child befriends a Jason Voorhees silent-type slasher.” Preciado actually wrote a screenplay for this one, and hopes it will be available to buy online soon. The soundtrack includes such bangers as Night Killer ‘89 (feat. Craig Cairns) , Ceremony, Murder by the Lake, and Together We Were Dynamite (feat. Craig Cairns).

– Zombiria 2: Coined the “most offensive movie never made”, Preciado released Zombiria 2 in 2019, the same year he released the soundtrack for the first Zombiria. Turns out, Zombiria 2 is the same album as Zombiria, just with the added bonus of “music from extra gorey scenes included in the international version.” This was intentional, as Preciado wanted to “create the same confusion as the Zombi series in which Dawn of the Dead (1978) is known as Zombi in Italy and Fulci’s Zombie is known as Zombi 2 in the U.S.” With this release, we have such haunting hits as Risurrezione, Il Zombi Cristo, Sacrificio, and Crocifissione.

And that’s just the tip of the ice pick. To hear all the tracks Preciado has done, check out his YouTube channel here and his Spotify page here! To keep up-to-date on his work, follow his Twitter here and Instagram here. His next soundtrack — An American Werewolf in College — drops in October, so be sure to keep a knife out… I mean eye, keep an eye out.

Also, his first soundtrack for an actual, fully-produced film just came out this year, titled Cult of VHS. The music was used in the documentary of the same name, which releases on August 28th. Not only was he a composer, but Preciado also helped produce this one.

Also also, the Kickstarter for his first feature film, Narco Shark, just launched not too long ago! It’s fully written/directed by Preciado himself, so if you can, check out his campaign right here and the trailer below. I’ll keep you updated once I am!