How does this ranking compare to yours? 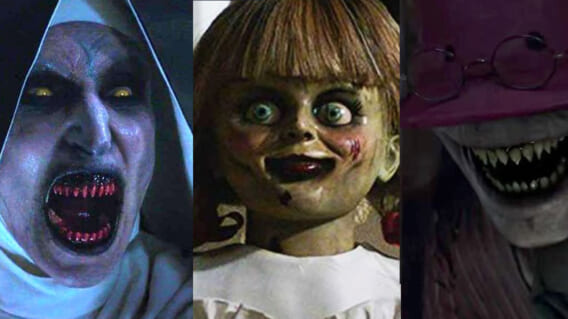 The Conjuring Universe is a distinctly modern horror franchise spear-headed by James Wan and his haunted-house-on-steroids style of scary. This shared universe of films is produced by New Line Cinema and is distributed by Warner Bros. Pictures.

For the uninitiated, the stories within this tightly knit world revolve around the real-life figures Ed and Lorraine Warren, who were reportedly actual paranormal investigators. These two, while controversial figures, did have their names associated with a number of high-profile hauntings during the 20th century. Today we are taking a deep dive into The Conjuring Universe to see how each film is ranked (in order) by the folks voting over on IMDb.

The first film in this multi-billion dollar franchise was scary, intimate, and completely outrageous. The heartbreaking lead performance by Lili Taylor anchored the jump scares to a story about family, grief, and fear. One of only two TCU entries directed by James Wan, it deserves its spot at the top of the list.

Sliding in second place is the final Conjuring universe entry directed by James Wan. While the inventive filmmaker continued producing the subsequent films, his distinctive style elevates this tepid sequel substantially. The Warrens are sent to urban London this time, changing the environmental tone drastically while keeping the lingering dread that made the first film successful.

The sequel to Annabelle is widely considered to be the stronger film, a rarity in horror franchise history. This follow-up changes the modern setting for a rural-American period piece, but screenwriter Gary Dauberman returns. Lights Out director David F. Sandberg comes to play and ends up delivering something fun, spooky, and original.

The third and most recent entry in the TCU’s flagship series teeters away from the spook house smokey soundstages toward gritty true crime realness. This is the first proper Conjuring film not directed by Wan, with the helms instead taken by Michael Chaves (dir. The Curse of La Llorona).

A personal favorite chapter in the bonkers land of Conjuring, the third Annabelle film drops all pretence and does what these films do best. It’s not self-serious, it’s spooky as hell, and it rockets by at a rapid pace. The directorial debut of long-time franchise scribe Gary Dauberman, Annabelle Comes Home is as fun as it is silly.

The first Annabelle film is actually the second-ever entry in The Conjuring Universe if you can believe it. These lukewarm origins to everyone’s second favorite killer doll stars Annabelle Wallis who would eventually shine brighter in James Wan’s camp masterclass Malignant.

Yet another chapter penned by Gary Dauberman, The Nun finally got her own film in 2018 after scene-stealing appearances in The Conjuring 2 and Annabelle: Creation. While The Nun is hardly anyone’s favorite entry to The Conjuring Universe, is the highest-grossing film in the entire franchise, and the tenth highest-earning horror film ever made, grabbing $365.6 million!

The bottom ranking entry in TCU is also a bit of an outlier. The Curse of La Llorona, the sixth installment of TCU, concerns the real Latin American cautionary tale of La Llorona. In this rendition of the urban legend, La Llorona is an evil ghost who steals children. It’s set in 1973 LA and features a strong performance from Linda Cardellini.