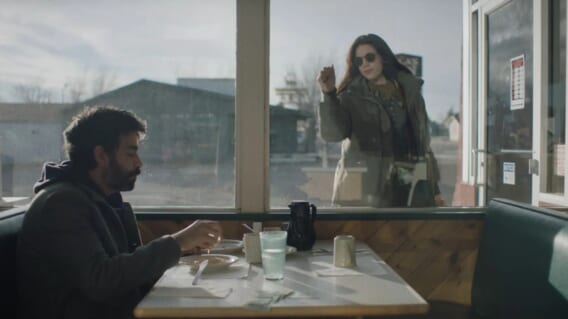 The existential supernatural drama Next Exit recently saw its World Premiere at the 2022 Tribeca Festival where it took home the award for Best Cinematography. The macabre new film is the debut feature from writer/director Mali Elfman (producer, Before I Wake) and stars genre heavyweights, Katie Parker (“The Haunting of Hill House”) and Rahul Kohli (“Midnight Mass”).

In Next Exit, when a research scientist makes national news proving she can track people into the afterlife, Rose (Katie Parker) sees a way out and Teddy (Rahul Kohli) sees his chance to finally make it. These two strangers, both harboring dark secrets, race to join the doctor’s contentious study and leave this life behind. While Rose is haunted by a ghostly presence that she can’t outrun, Teddy is forced to confront his past. As these two misfits humorously quarrel their way across the country, they meet people along the way who force them to reckon with what is really driving them.

Now we’ve had the opportunity to sit down with filmmaker Mali Elfman and costars Katie Parker and Rahul Kohli to discuss their relationships with horror and the supernatural.

Dread Central: What is more comforting, the idea of nothing or something after death?

Mali Elfman: I think I wanted there to be something after death, my entire life. I think whenever I’ve lost someone, I wanted to believe that there is something there. I think it’s hard because I’m not a religious person. I’ve looked into religion, doesn’t work for me. I think for me, I believe in ghosts, but I think that’s also wishful thinking on my behalf of really wanting there to be something else. Whenever I’ve lost somebody wanting to know that there’s somewhere else that I can maybe see them again.

Katie Parker: It’s such a complicated question. I’m on the fence because I believe in reincarnation, and I’m really scared I’m going to come back as a blade of grass.

DC: Have you ever had a supernatural experience?

ME: I grew up in a house that was notoriously haunted. There had been a murder in it. There was three families moved in and moved out. There was a presence in the house. I think that’s also why I think I’m a little bit more open to it. But also, the way that we dealt with it was not like how a lot of films like, “Oh my God, there’s a ghost!”. It was more of an annoyance like, “Shit, the lights are on again. Flicking on and off again.” The doors would open and slam and all that stuff, and it was really just more annoying than anything else. So I think that’s kind of my perception of ghosts in general is, if they are there, if there is something, it’s not something to be afraid of. It is just something that is there.

KP: I worked on a horror movie after I did Absentia, which is an independent film I made with Mike Flanagan. I was doing this horror movie Kane Hodder and Tony Todd and we were in a penitentiary in West Virginia. There was this room we were shooting in called the Sugar Shack, which was this rec room that they put all the prisoners in. The correction officers, they would just let the prisoners do whatever they were going to do to each other. So a lot of fights, a lot of deaths, a lot of rapes. When we got into that room, and I went into this room not knowing that, there was a weight, a feeling. And Kane Hodder and Tony Todd are big guys. And they were like, “Nah, not going in there. I’m not shooting in there.” And I was like, “Hmm.” I don’t know if that’s supernatural, but I could feel something not good. Something in me was like, “You don’t want to be in there.”

DC: How did you access the romantic qualities of this film while making it?

Rahul Kohli: From a performance perspective, it’s no different from anything else. You got to have truth. And that’s what we do. For Katie and I, the conflict has to be truthful. The banter and the friendship has to be truthful and the romance has to be truthful. We make sure it’s grounded. That’s it really, it’s not really overcomplicated. I don’t think it gets special treatment. It feels like it’s just dealt with, with everything else. Not that this is a romantic film anyway.

Dread Central: You don’t think so?

RK: My favorite romantic movie’s Edward Scissorhands. I can cry thinking about it. But the point is, what’s being evident to us now is that everyone’s taking their own thing from it. You said you found it romance. We can’t invalidate what you felt, just because that wasn’t our intention. The same goes for horror. Do you think it’s a horror? That’s just as valid as me not thinking it is. I think that’s the movie’s strength, everyone’s finding their own piece of it and relating to it.

Dread Central: What’s the horror film that traumatized you the most growing up?

ME: Poltergeist for me. I saw that at a very young age. My sister’s six years older than me, so she was watching it. I came downstairs as the little girl was putting her hands on the TV and I remember being terrified. I was terrified, then I was intrigued. I had to go back and re-watch it, re-watch it, re-watch it. One of the things that was actually very relevant to that, which I have carried on, is the humor in that as well, as the whole chair scene and moving around. It’s funny. I love horror that can have those moments of levity and have those moments of light because the second that you laugh, then when you bring back the scare, then I’m really scared, cause I’m open to it. That was like pre-filmmaking for me.

KP: The first horror movie I ever saw was The Exorcist. Yeah. I remember it being like grief. Horror is like grief to me, in that it’s really confronting and it demands everything of you. It’s why people are like, “Nope”. When they get scared, they totally check out. I remember having that experience, and I totally shut down to horror. It’s too scary. I have nightmares because it was bringing all this stuff up for me. It wasn’t until I met Mike that I had a clear understanding of what was happening emotionally.

RK: It’d be Jaws. That stuck with me. Still, even to this day, you can’t get into the ocean without thinking about it. I’m a big gamer, so PT, from Hideo Kojima and Guillermo del Toro is the scariest thing I’ve ever played.

DC: What were some creative references for making Next Exit?

ME: “Kafka On the Shore” by Haruki Murakami. There’s a chapter in that that describes the experience of ghosts. That’s one of my favorite books of all time. So I made everybody read chapter 23. Read the whole book, but chapter 23 in particular. Eternal Sunshine of the Spotless Mind is also a huge inspiration for me. It’s probably the closest movie I can think of. Another Earth too. It’s fantastic.

DC: Since this is a road film, what was the most important road trip you’ve ever taken?

ME: I actually got really into it during COVID. Surprise. Surprise. I would do LA. I’d go through the Sierras and go to Yosemite and then go down the coast. I did that a few times. Just really pretty. I love Arizona. I don’t know; I like being outside. I love staring at the stars and staring at the water whenever I can get outside.

DC: Is there a spooky movie that you’ve seen recently that you’d want to recommend?