‘Winnie the Pooh: Blood and Honey’ Director Reveals One of Its Nastiest Kill Scenes [Exclusive Interview]

Winnie and Piglet go on a rampage. 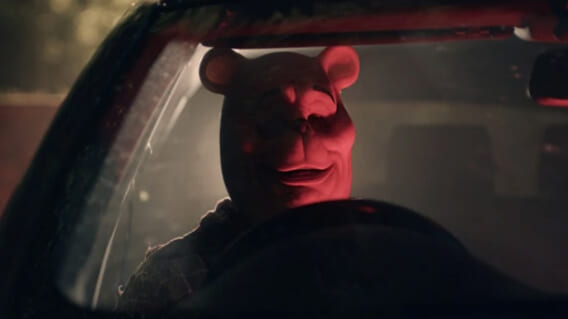 After Dread Central broke the story about the forthcoming horror film Winnie the Pooh: Blood and Honey, the internet just about lost its goddamn mind. Cinema fans everywhere expressed terror, disgust, and intrigue at the photos portraying Winnie the Pooh and Piglet as violent murderers. Then, in only a matter of hours, hundreds of other entertainment outlets picked up the story, and the rest is viral history.

So naturally we reached out to the filmmaker behind the controversial horror title for an interview, and we were not disappointed by what he had to say. Rhys Frake-Waterfield is the filmmaker and producer behind Winnie the Pooh: Blood and Honey, an ITN Studios Original Production. While in the middle of post on a number of campy and exciting new releases, he sat down with us to talk all things blood and honey.

Dread Central: Are Pooh and Piglet humans or animals in your film?

Rhys Frake-Waterfield: It’s definitely Pooh and Piglet. It’s not just two people in a mask. The story is meant to be that they’ve gone on this onslaught from being enraged by what’s happened to Christopher.

DC: What happened to these guys?

RFW: Pooh and Piglet experience a drastic drop in food as Christopher grew up. Over the years they became increasingly hungry and feral. They had to resort to eating Eeyore. Then Christopher returns with his wife to introduce her to his old friends. And when that happens, they get enraged when they see them. All of the hatred they’ve built up over the years unleashes and then they go on this rampage. That continues when they end up at this rural house with these girls.

DC: How violent is this film going to be?

RFW: Pooh and Piglet, they don’t have any remorse, and they’re actually pretty sadistic. That was something I wanted from the characters. It’s always been just Pooh and Piglet. I’ve imagined, and got the actors, to portray that Pooh as the alpha of the two. So he’s the alpha male over Piglet, and he is always the one in charge of the camp. Piglet essentially is almost a little minion to him, and Piglet just does whatever Pooh wants. And they’ve built up this over the years. They’ve built up these really sadistic tendencies amongst themselves. So they used to just go out and just target people to kill them, to eat them as a way of living … just food basically.

DC: Can you reveal one of the more shocking kill scenes?

RFW: That girl in the jacuzzi. In the first draft of her death, she’s enjoying herself, doesn’t realize it. Then Pooh comes behind and then with a big sledgehammer just smashes her head. But now, they put her in this new scenario where she’s hog-tied to the ground. Pooh, he’s in the car, and Piglet’s holding her down. Pooh eventually drives over her head, but they really taunt her first. She’s on the floor, and once she wakes up, Pooh doesn’t instantly start driving toward her. He starts revving the engine to make her just worry more and more and builds up a lot of tension. And eventually, even when he’s going to drive over ahead and he’s going towards her, he’s just almost rolling the car; he’s just doing it really slowly. So it’s quite brutal for that moment.

DC: Can you give us a sense of when this film is going to come out?

RFW: I’m going to expedite as much as I can to get it finished ASAP. And then once that’s finished, that’s when we can get the trailer moving. I think we’ll get that done super, super fast as well. I’m getting emails from territories saying, ‘Let us have it. We are really interested in distributing it in.’ I don’t know if Netflix would be interested, but that would be really, really cool to get an exclusive release there. So things like that are options.

DC: How does it feel with this project going so viral?

RFW: It’s pretty mad. Well, the reason I wanted to make this is, that I’m a big, big horror fan. I love horror. I’ve been watching it just constantly since I was a teen, and I really wanted to do something which was different. And that’s why I went down this route. I thought, okay, let’s not do a general werewolf film or vampire film. I wanted to try and find something unique that can excite me, and everyone on the set. When we were shooting this it was just having so much fun. It’s the best shoot I’ve ever been on. Then the intention of all of it was, I’m sure there’s a little niche horror market here. Because not all horror fans will love it. But I’m sure there are people who love these alternative realities and universes. People, they’re going to really, really enjoy this and really like the film.

DC: I know it’s a little preemptive, but with all of this frenzy, are you starting to think about sequel ideas?

RFW: We’ve had loads of quirky ideas. There are other characters involved in that universe, which I can’t go near, just because obviously there’s a fine line with the whole what’s in the public domain area. And I don’t want to tread on anyone’s toes like that. I just want to stick to what I’m allowed to do, and do my own original retelling of that. And I’ve tried to stay as far away from the Disney side of it as I possibly can.

I’m hoping, because everything is correct and I’ve done everything properly, that I’ll now be able to go onto the sequel side of it. We’ve got so many ideas. My little chat groups are going absolutely crazy and we’re all brainstorming things and seeing where the next scenario we can put this into. Hopefully, it will be how this has gone, and we can ramp it up even more and go even crazier and go even more extreme. And I’ve got lots of twisted and dark thoughts on what I want to put Pooh and Piglet through, and what scenarios I want to put them in and stuff, which I hope everyone would like.

Lastly, what do you think of these images for Winnie the Pooh: Blood and Honey? Are you interested in checking out this mysterious horror movie when it’s eventually released? Let me know over on Twitter via @joshkorngut. I’m always around to chat all things indie horror!