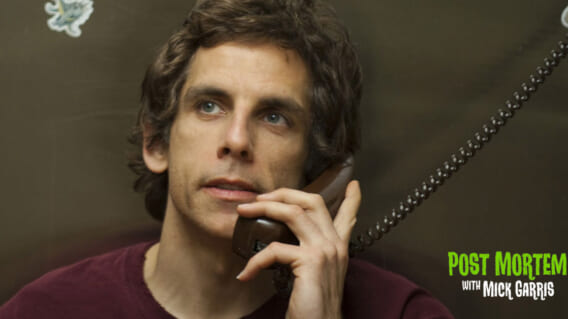 Fans of horror podcasts already know all about Post Mortem with Mick Garris on the DREAD Podcast Network. The show features filmmaker and author Mick Garris—maybe best known for his Stephen King adaptations and creating the Masters Of Horror television series—as he dives deep into the devious minds of the greatest filmmakers and creators in cinema. He’s talked to horror icons such as Tom Savini, Joe Dante, John Landis, Alice Krige, and more. This Wednesday on Post Mortem, Mick will sit down with the one and only Ben Stiller.

Ben Stiller is best known for writing, directing, and starring in some of the most successful comedies of all time, including Zoolander and Tropic Thunder. But the funny man offers a lot more than just laughs. The Emmy and BAFTA winner has also directed a slew of genre-defying critical darlings such as Reality Bites, The Cable Guy, and The Secret Life of Walter Mitty. More recently, Stiller directed the dark Apple TV+ critical hit Severance starring Adam Scott.

A surprising common ground shared by Garris and Stiller happens to be Stephen King’s terrifying novel, The Shining. Garris, the man behind many treasured King adaptations, created an Emmy-winning 1997 limited series based on the novel that’s famous for its scares, performances, and the fact that King himself wrote the teleplay. According to Variety, Stiller is now attached to star as Jack Torrance in an upcoming stage adaptation on London’s West End.

You can catch Ben Stiller on Post Mortem with Mick Garris right here on the DREAD Podcast Network on Wednesday, May 11th.

Check out every episode of Post Mortem with Mick Garris right here:

Lastly, are you as excited to listen to Ben Stiller on Post Mortem as we are? Let me know over on Twitter via @joshkorngut. I’m always around to chat all things Post Mortem With Mick Garris!