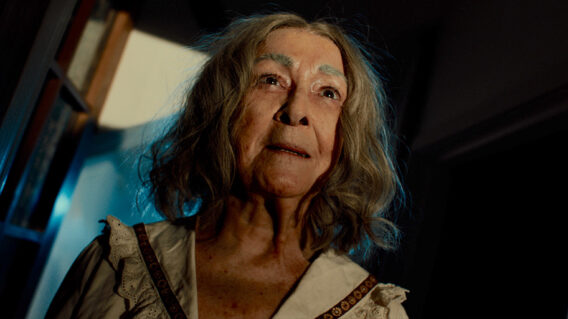 Jamie Hooper’s The Creeping shares its lineage with Ghostwatch, The Stone Tape, and several other BBC ghost stories. It starts with a young Anna Reynolds (Taliyah Blair) being told an unusually frightening ghost story by her father, Harry (Jonathan Nyati). All the haunted house trademarks are there. Old British cottage? Check. Thunderstorm? Check. Opaque warnings to not wander in the dark? Check. Anna is awoken at 3:23 that morning, walks into the kitchen, and is thoroughly, traumatically frightened.

Years later (The Creeping is set in 1985), Anna (Riann Steele) returns to her childhood home to care for her ailing grandmother, Lucy (Jane Lowe). Her father recently passed away. But since Anna grew up with Lucy, she feels a considerable affinity toward her. Resultantly, Anna compartmentalizes her childhood trauma to stay with her grandmother through her final days.

The Creeping, at first, might as well be called The Conjuring. An early soundtrack entry sounds eerily similar to Joseph Bishara’s work on James Wan’s classic. The title font might as well have a 2013 copyright affixed as well. There are slamming doors, sheets pulled off the bed while people sleep, a spooky music box, and sinister misdirection punctuated by a ghastly, ghostly visage. The throwback thrills are effective, no doubt, but they’re not simply imitations. Throughout the first act, The Creeping is Conjuring-lite, a low-budget mimic of this century’s preeminent haunted property.

Luckily, that familiarity is either an illusion or necessary evil to get audiences on board. As The Creeping progresses, Hooper’s influences unfurl. More than a Conjuring-riff, The Creeping is a heartfelt yet necessarily sinister throwback to the BBC ghost stories of yesteryear. With effective scares nonetheless suitable for broadcast, heaps of British accents, and some sensationally rendered ghosts, bedsheets and all, The Creeping is a campfire tale with considerable respect for its forebearers. It’s a movie tailor-made for stormy nights in front of the fire. It’s the kind of ghost stories grandparents told your parents before they passed it on to you. The Creeping is inviting and accessible, a story that feels inimitably personal yet concurrently universal.

Warmth only accounts for so much, however. The Creeping isn’t free from the settled dust of ghostly shenanigans. Anna is especially nonplussed at first. It’s a curious choice given not only what’s going on, but her childhood experiences in the home. Steele is incredibly strong in the role. But the script never allows for any internality beyond what Anna dolls out in frequent talks with Karen (Sophie Thompson), Lucy’s caretaker. It’s hard to get a grip on what she’s feeling beyond fear or confusion. Steele tries her best, but The Creeping feels compelled to fit her into an archetype of every haunted house protagonist that’s come before. There’s a laconic energy in the first half attributable more to conventional character arcs than Hooper’s assured work with The Creeping’s scare scenes.

Those scares work, too. While The Creeping only packs one truly unpredictable jolt, the more familiar jumps work well enough, especially given the pedigree of Hooper’s inspiration here. As the supernatural tension mounts, Hooper wisely grounds it in something distinctly personal to the characters. It’s certainly darker than the mood Hooper cultivated before, though it never veers too far into uneasy or exploitative territory.

The Creeping is a classic haunted house movie that never endeavors to do more than pay homage to the kinds of British classics that made houses scary in the first place. A tapestry of BBC and The Changeling (another alliterative inspiration), it’s a movie with a clear goal in mind. With conspicuous lines drawn between good and evil, fear and hope, The Creeping scares like the best of them. It’s unlikely to have anywhere near the impact its progenitors did, but on a dark and stormy nights when the lights are off, it doesn’t need to. It’ll creep its way into audience minds all the same.

The Creeping is a delightful, throwback ghost story that perhaps leans too heavily on its haunted past