‘Trip’: A Grieving Mother Must Survive Her Worst Nightmare In This Exclusive Trailer 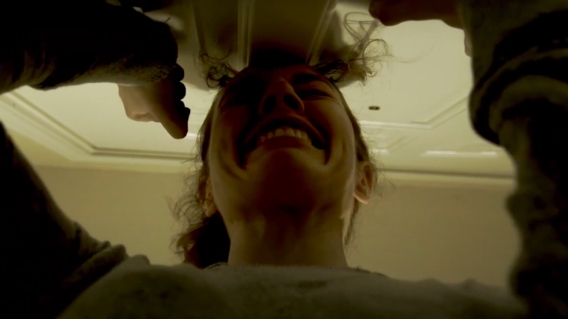 Sorrow and despair are the villains in the frightening Trip, on Terror Films AVOD Channel Friday, May 13th before a wide digital on Friday, May 20. Directed by Neil McCay, the film follows a mother trying to understand the death of her daughter through more unconventional means.

Following her daughter’s suicide, a grief-stricken mother is visited by an unconventional therapist who offers a hallucinogenic drug that will allow communion with the dead. Desperate to understand her daughter’s psyche she accepts the offer, and soon finds herself terrorized by her daughter’s identical experiences.

We got an exclusive first look at the trailer. It teases a difficult-to-watch, single-location horror movie about a mother’s worst nightmare.

In a statement about the film, McCay explained,

“When I saw Gremlins at 6 years old, I became obsessed with monsters. Then I became obsessed with storytelling and filmmaking, so monsters naturally came along for the ride. But I had never imagined a monster being intangible, like an emotion. And that’s where the idea for Trip was born. Could something like depression become a villain in a movie?

What attracted me to making Trip, was that it wasn’t just about making scary things happen. The core story was about grief and depression, and the struggle to maintain relationships and keep hope alive. As someone who has struggled with this myself, I found the storytelling therapeutic.

Although the movie centers around a reclusive alcoholic who isolates herself in her house, and there is a character who appears wearing a face covering, I promise you this all was written and filmed in 2019, long before we had heard of COVID-19. It’s just a coincidence! But I’m glad it could be a talking point. Now more than ever, we need to lean on each other to discuss and deal with the subjects of isolation and depression.”