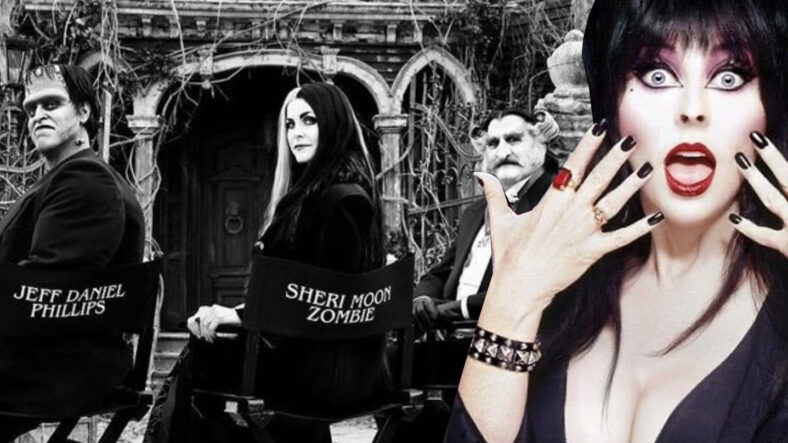 Cassandra Peterson, perhaps better known as Elvira, is one of the most recognizable faces in horror. The renowned host, actor and personality was recently announced to be cast in Rob Zombie’s highly anticipated reboot of The Munsters, as confirmed by the director’s Instagram earlier this month. Since then, the star spoke with Variety about her new role, the film, and her thoughts on the project’s casting choices.

It’s worth noting that the the icon will likely not be appearing as her Elvira character in the forthcoming family friendly movie. Her character’s first look (via Rob Zombie’s Instagram) depicts Peterson like we’ve never seen her before. According to the post, Peterson is playing Barbara Carr, “the number 1 real estate agent in all of Mockingbird Heights”.

“Here, I am playing this character that’s so so different from what I normally do, I’m playing a super straight character,” Peterson said in a quote to Variety. She continued by adding, “Barbara is a normal woman, this real estate agent. It was exciting and terrifying, but it was really cool.”

She also confirmed that her part has already been shot in Budapest where production still continues. “I had the best time with all of the actors that I was working with, and we had so much fun,” she said of the experience. “The people there, the set, they built the house — oh my god, it was just all magical. It was like ‘The Munsters’ came alive. It was insane.”

Check her out in the role here:

In Defence Of Lily Munster

In the same interview, Peterson also defended the production’s decision to cast Sheri Moon Zombie in the role of Lily Munster, a choice which has proven somewhat controversial among horror fans. On the topic, Peterson said: “Sheri is freaking adorable as Lily Munster. I see on social media people asking, ‘Why is Rob always casting her?’ Because she’s freaking good. I think she killed it and people will be really surprised and really like her character.”

The original cast of The Munsters featured Fred Gwynne, Yvonne de Carlo, Beverly Owen, Butch Patrick, and Al Lewis as Grandpa Munster. Together, the group played the average nuclear American family. But with a twist—they were a clan of monsters!

Lastly, there’s still no word if The Munsters will head to theaters, or if it’ll be exclusive through the streamer Peacock sometime in 2022.

Lastly, how do you feel about the casting choices in Rob Zombie’s upcoming reboot? Are you excited to see how The Munsters turns out? Let us know in the comments below or on Facebook, Twitter, or Instagram! Dread Central is now on Google News!