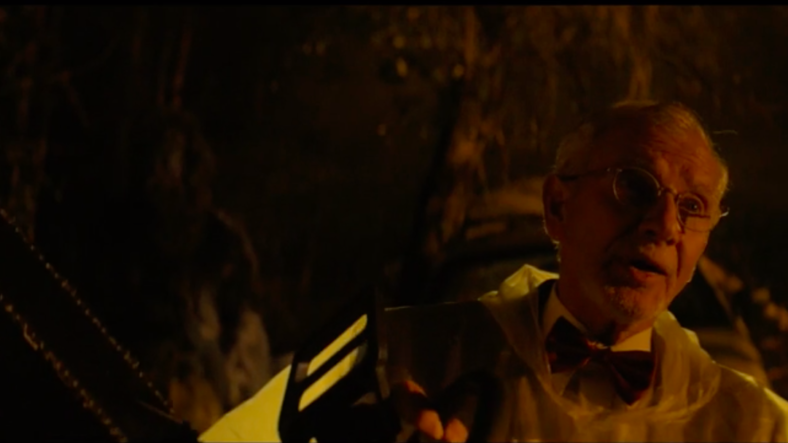 Dread’s newest film Ditched has just hit VOD and folks, it’s gross. Flesh is slashed open, needles are taped to knuckles, bullets rip through bone, and so much more. It’s every gore hound’s dream! Don’t believe it? Then check out this exclusive clip below featuring a nice old man in a bow tie and rain poncho wielding a massive chainsaw.

This poor guy is just looking for a full night’s sleep after enacting his revenge on those who did him wrong. But that’s only one part of Ditched‘s larger, more brutal story. Heads will roll. Literally.

In Ditched, paramedic Melina wakes up in an overturned ambulance with no memory of the accident. She is trapped in the woods with two prisoner medical transfers and the police escort team. They are all desperate to escape. The group quickly discovers that they are the victims of an ambush with the perpetrators hunting them down one by one.

Christopher Donaldson wrote and directed the film. Marika Sila, Kris Loranger, Lindsay Robinson and Mackenzie Gray star in Ditched. We recently sat down with Sila to discuss her first time acting in a horror film!

Ditched is now available to watch on digital and VOD. It comes to Blu-ray on February 15.