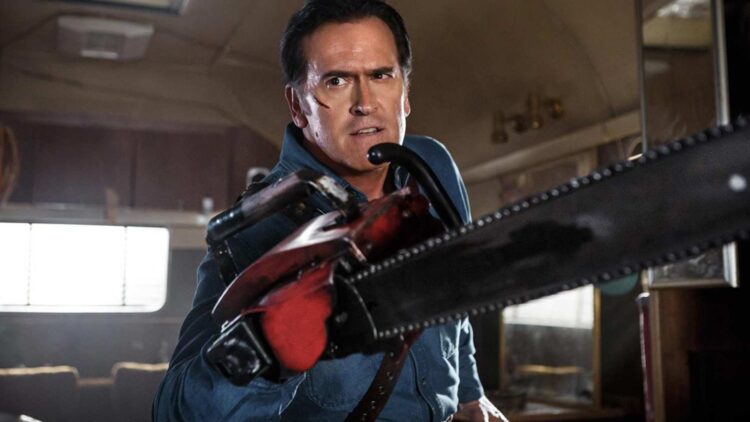 Things have been a little quiet on the Evil Dead Rise front ever since we reported that the new sequel has wrapped filming (6500 litres of blood later, no less.)

Now producer Bruce Campbell is back with some updates on the legacy franchise. The legendary actor, writer and producer sat down with German horror publication Blair Witch.de to share some brand new insight into the latest Evil Dead affair.

“It’s [about] a single mom who now has to deal with this book. These days it’s more about the book. That book gets around. Passed along, people try and get rid of it, they try to bury it or destroy it and they really can’t. So this book just keeps popping up, so really it’s just another story of what happens if this book appears in this particular group of people’s lives and how it intersects.”

Bruce Campbell continued by saying “this family is not the same at the end of the movie. They’re gutted. The whole family is destroyed. These people get possessed. Brothers and sisters, sons, daughters, you know. So yeah, it’s a family affair, this one’s a family affair. They’re all related in this one. I think that makes the possession and killing your siblings – things like that, even harder. Because in the original Evil Dead, there was only one brother/sister combo, Ash and his sister Sheryl. The rest were just friends. Now this is all, they’re all related in this household. Much more excruciating.”

While Campbell has been clear from the start of production that he will not be making an appearance, we’re still excited as hell to see what Evil Dead Rise has in store. Putting the action in a totally different setting could be the refresher the franchise has been looking for since the 2013 remake starring Jane Levy.

Are you a fan of Evil Dead? Are you excited for Evil Dead Rise to hit HBO Max? Let me know on Twitter via @joshkorngut. I’m always down to talk Evil Dead and all things horror! Dread Central is now on Google News!