‘I Know What You Did Last Summer’: Cinematographer Anka Malatynska Talks Filming the New Horror Series

We sat down with cinematographer Anka Malatynska to discuss her work on 'I Know What you Did Last Summer' and the power of darkness. 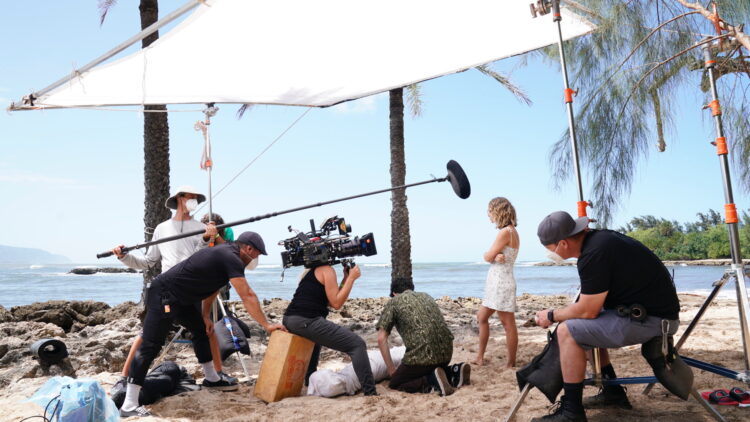 Almost 25 years after Jim Gillespie’s I Know What You Did Last Summer was released and became a
horror classic, the reboot from Amazon Prime has wrapped up its first season. While the characters in this adaptation are brand new, the basic plot is the same:

“One year after the fatal car accident that haunted their graduation night, a group of teenagers finds themselves bound together by a dark secret and stalked by a brutal killer. As they try to piece together who’s after them, they reveal the dark side of their seemingly perfect town—and themselves. Everyone is hiding something, and uncovering the wrong secret could be deadly.”

Season 1 of I Know What You Did Last Summer stars Madison Iseman, Brianne Tju, Ezekiel Goodman, Ashley Moore, Sebastian Amoruso, Fiona Rene, Cassie Beck, Brooke Bloom, and Bill Heck. Denis Crossan served as the cinematographer for the 1997 film. For the new series, Anka Malatynska is taking the reins. This isn’t Anka’s first foray into horror; she previously worked with I Know What You Did Last Summer director, Craig William Macneill, on Hulu’s Monsterland.

In the exclusive interview, Malatynska talks about everything from pre-production, to what she thinks audiences will be most surprised about when watching the reboot.

Dread Central: How did you first get involved with I Know What You Did Last Summer? What attracted you to the script?

Anka Malatynska: I got involved through Craig Macneill, our pilot director. We did an episode of Hulu’s Monsterland together and really hit it off creatively. When he got on the show, he told the showrunner about me, and then I met with her, Sara Goodman. Creatively it was a fusion of Craig and the script. I really liked the script, they felt like true human stories on the page and the characters felt really real.
The conflicts these kids were having didn’t have that presentation TV vibe. That was Sara’s desire, she is a great young adult writer because she can relate to that. The script really focuses on being a young adult in a world and not having a lot of support systems and trying to navigate what is a fucked-up reality. I thought the writing was brilliant in that respect.

What did pre-production look like for you on the series?

Like so many things, fast and furious and then nonexistent, once I started shooting. This was the first series I was the only DP on. So I got to prep the pilot and second episode with Craig. I think we had four weeks of prep in Hawaii. Once I started shooting, I was shooting. And then our second block director came in, Logan Kibens, whom I also worked with on Monsterland. From the showrunner’s perspective, it was great because I had worked with her before. There was a sense that prep wouldn’t take as long, because we already had an established creative relationship.

There was no downtime to prep the second block, once I start shooting, I’m prepping while I’m shooting. It then came about six-day weeks and then it became about Logan coming to set. She was also during our first block, coming in and directing some scenes that were in her episodes at the party. It was really complicated. The party in the pilot was really complicated to shoot because of the way we had that location and that amount of extras for only a certain period of time. But that party is revisited in every episode for eight episodes.

It’s not like we could just lift the footage from the pilot of [I Know What You Did Last Summer] because each episode gives you a point of view of the events, so that’s a little different. That transition from blocks one and two was really Logan and Craig overlapping each other. Because the schedule was so intense and we had a very new director coming in the third block, we decided it would be good to have an alternating DP come in and shoot 1 block, so I could prep the finale. While I was prepping the finale, we still had to do pickup shots for things in the pilot and from the second episode. It was an intense schedule.

You worked with I Know What You Did Last Summer director, Craig William Macneill, previously on Hulu’s Monsterland. Because you already had a history with him, did he allow you to experiment more on the show?

I think he had a desire to experiment and kind of lean into a different style on the show. Our
episode of Monsterland together was very controlled. In general, I think Craig’s directing is very
controlled and calculated horror. He really surprised me on this show when he said he wanted to lean into hand-held and this young Andrea Arnold, American Honey type of vibe. That was a big movie we referenced to make these kids feel real and not quite so television. I feel like Craig and I got to experiment together. Craig is not just an actor’s director, he’s very much a visual director. We have a very good working relationship together. I think he enjoyed working with me on Monsterland and that’s why he brought me to this show.

What sort of direction did Craig give you on how he wanted the show to look?

It’s not just Craig, it’s also Sara and what she wanted from I Know What You Did Last Summer. I think Sara’s vision really balanced the show out very well. I feel like all of our directors got to bring in a little bit of their heart and soul and their point of view to grow the look of the show. While we leaned into the hand-held vibe, especially for the party and the beginning, we also did some spectacular camera moves that get us into the party.

Just like handheld was really important to Craig, and I think that this is where Sara and I really aligned, we also thought it was really important to have those moments of studio work, where the camera can rest and the action can develop in the frame. I think the show, in the end, ended up being a nice mixture of both studio and handheld, that’s very much crafted to support the story.

How is the cinematography for I Know What You Did Last Summer different than your other horror series, Monsterland?

It is vastly different. Monsterland visually leaned into a lot of magic and fantasy. There was a lot of smoke and light and opportunities to create lighting effects that pertained to the stories because the
stories were so fantastical. Here the goal was to really make it feel like a real world. I think Covid
affected our use of atmosphere. We were encouraged to move away from atmosphere and use it on a
very limited basis. I feel like I Know What You Did Last Summer really recalls things like American Honey. It feels like you are in Hawaii with these kids, in their Instagram wannabe glamming world. What was similar to Monsterland is that I could delve into these deep moments of darkness and moodiness in the jungle. That’s where it may be overlapped with Monsterland, but I would say they are vastly different in their cinematography, and that’s what was really exciting for me.

Were you a fan of the original I Know What You Did Last Summer movie? Did you go back and watch it after you got the job to see how fellow cinematographer, Denis Crossan approached that project?

Yes, I did immediately. I watched the movie years ago, about the same time as I watched Scream. I remember it being very scary when I watched it as a teenager, but when I rewatched it now, I didn’t find
it as scary. Maybe that’s because I work on horror a lot now. When we look back on the 90s, the looks of movies and TV have changed. I actually got some ideas from the original film, when I rewatched it. Some
of Denis’s cinematography really helped me problem solve a few things. Very specifically, the accident in
the series happens on a cliffside road in the middle of the night. It’s really written like you are in the middle of nowhere and there is no motivation for light. I was thinking how are we going to get these
really wide driving shots. I remember looking at the original and he used dusk for the night, which works.
You can do dusk, then you are in a night scene and it makes sense to the audience. I don’t know if the
wide shots made it in, but I do feel the cliff road is really an ode to the original.

You have worked in every genre basically. Do you think that there is a different set of guidelines when working in the horror genre?

Absolutely, I think every genre has its own guidelines, or things you lean into. I love horror because
I love darkness and I love that darkness is poignant and illuminating. Also I love pushing the envelope of how dark we can go. And what does darkness mean visually. It’s not that we can shoot just a pitch-black
road. It still has to look like something. In nightwork, as cinematographers, we get to be very expressive. Each night scene can be approached very different. Versus approaching a day exterior, you are kind of working in the confined environment that you are in. I think building tension in horror is very different than shooting comedy. Intentional camera movement or pushing in. Like in Rosemary’s Baby, you get the audience to try and look beyond that door, but you will never show them what’s behind that door. I think horror is its own world. Every genre is its own world. On top of that, every cinematographer adds
their own kind of artistry and point of view and the requirements of that world.

Do you think fans of the original film are going to be surprised by anything in I Know What You Did Last Summer?

I feel like they will be surprised by everything, by how different the characters are and the culture
that they live in. Fundamentally, I feel like the original storyline weaves very differently in the series
than the original. It’s not four friends, it’s five friends. I hope fans will be pleasantly surprised. The feedback that I have gotten is that these kids feel very modern and embody the spirit of today’s 20-somethings.

Are you personally a fan of horror? If so, are there any horror films where the cinematography has
really stuck out to you?

Yes, I am a big fan of horror. My favorite two are Get Out and Pan’s Labyrinth. I think Get Out is a really good study of horror and how to build tension. I loved Pan’s Labyrinth, I don’t know if you consider that horror, but it leans in on that Monsterland world and the cinematography is more poetic
and fantasy-oriented.

Watch all eight episodes of the series now on Amazon Prime.