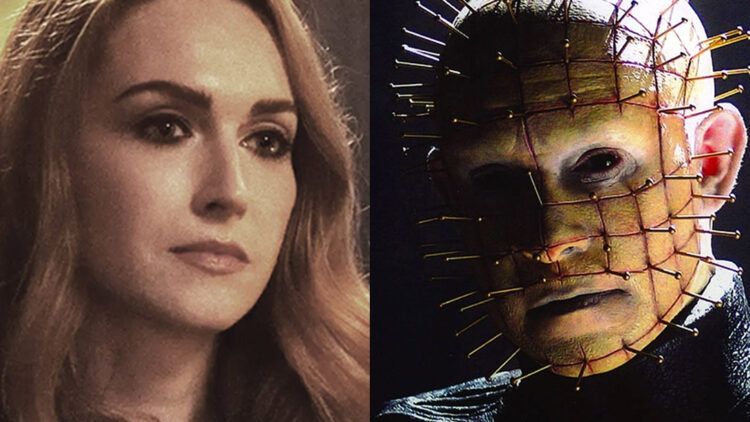 Your new Pinhead has arrived and she listens to Kim Petras. With the new Hellraiser slowly edging its way toward release, the latest performer to don the pins has released an FX processing video via Instagram.

Jamie Clayton, the star who will next portray Pinhead, shared the video upload of her face-molding process, and it doesn’t look comfortable. (She tells several inquiring minds in the comments that it took about 34 minutes to complete.)

Even more interesting is who else she tagged in the recent post: Burbank, CA-based studio Russell FX.

Josh and Sierra Russell are the practical make-up wizards behind modern horror gems like The Ritual and The Night House. Both of these excellent films are also directed by Hellraiser helmer David Bruckner. If you wanna lose your lunch, I highly recommend checking out their Instagram feed. It’s gnarly AF.

Check out the video here:

Jamie Clayton (The L Word: Generation Q) stars as Pinhead in the upcoming Hulu reboot of Hellraiser. The film recently wrapped up production in Serbia and is in post-production, eyeing a 2022 release.

If a gender-swapped Pinhead sounds strange to you, check out the original novella “The Hellbound Heart”. In Clive Barker’s story, the head Hell Priest was never described as explicitly male. The BOOM! Studios comic books (pictured in the image below) have already incorporated a female Pinhead a number of times and it was cool as hell.

Clive Barker is finally returning to the producer seat for this new production. Barker recently won a legal battle to obtain the rights back to his franchise and will retain the series on December 19 of this year. We expect more exciting Pinhead content from him further down the line.

Lastly, what do you think about the upcoming Hellraiser? Let me know on Twitter via @joshkorngut. I’m always down to talk about all things horror! You can also let your voice be heard in the comments below or on Facebook, Twitter, or Instagram! Dread Central is now on Google News.