Russell Owen's atmospheric horror feature has shades of Robert Eggers. But its icy tone makes it hard to empathize with its characters. 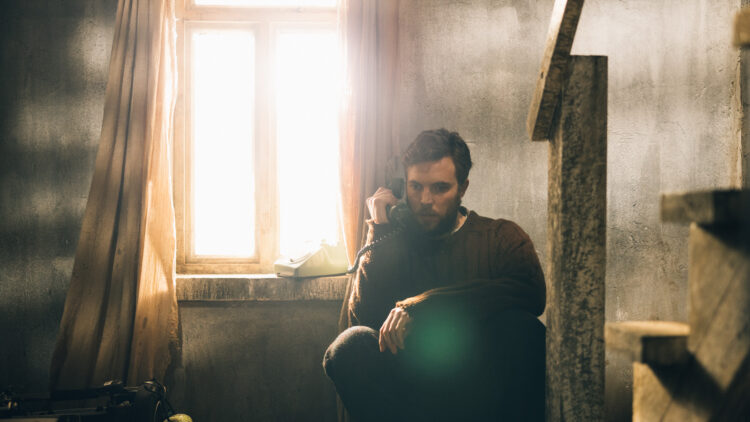 The sophomore feature from British director Russell Owen, Shepherd, finds Eric Black (Tom Hughes) in mourning, devastated by the mysterious death of his wife Rachel (Gaia Weiss). When he spots a curious job ad in the paper—a shepherd position on a remote Scottish island—it seems like the perfect opportunity to put the past behind him. And so, in an attempt to escape his torment, he flees into the kind of otherworldly landscape in which you’re just as likely to get lost and lose your mind as you are to find respite, find peace, or find yourself. There, something finds him.

Shot on Scotland’s Isle of Mull, as well as Great Orme Country Park, a limestone headland at the northern tip of Wales, Shepherd looks every bit as stunning as locations like these should, with cinematographer Richard Stoddard ably capturing the regions’ haunted, wind-hammered nature. Keen-eyed audiences might even recognize Orme from Owen’s directorial debut, 2020’s Patients of a Saint (Inmate Zero), where it stood in for the fictional North Atlantic prison island of St Leonards. Isolation and imprisonment appear to be themes in Owen’s work, these islands seemingly ideal settings in which to confine and harry his characters—but they may also limit his imagination.

Eric arrives by ferry, steered by Fisher, a psychopomp of sorts, played by a stone-cold and superbly costumed Kate Dickie. There’s something unreal about the journey. The destination is no island paradise either, all murky fens and dank mires, steep slopes shouldering great sunless glens deep enough to conceal all manner of threats. On the shore sits an ominous lighthouse, beyond it Black’s new home, a dilapidated cabin. As Fisher delivers the islet’s new steward, she stops still at a line of kelp running along the shore. She won’t cross it.

It’s in Dickie’s enjoyably off-kilter performance that Shepherd comes closest to dropping its “elevated” pretensions and embracing the tongue-in-cheek, with Fisher’s fun, oblique omens piercing the movie’s miserablist veil. As she reaches over the kelp to hand her charge the key to the cottage and wish him luck, she appears to possess a certain omniscience that indicates things won’t end well for Black. It feels like a wink to the audience too: Strap in, things are about to go south. They do.

It’s in Dickie’s presence too that we find the film’s clearest connection to Robert Eggers, having played the matriarch in the U.S. director’s astonishing 2015 feature debut The Witch. Eggers’ unimpeachable imprint is all over Shepherd, from its foreboding livestock to its locked lighthouse and its leading man’s escalating madness. Indeed, both Shepherd and Eggers’ The Lighthouse were inspired by the Smalls Lighthouse tragedy of the early 19th century, a tale local to Owen. These shades of Eggers indicate the kind of atmosphere Owen is aiming for.

He doesn’t get there. Shepherd is at its brooding best during its most suggestive passages. Things are tense during Black’s first few nights on the island: The creaking shack feels like a deathtrap, every darkened corner a danger, the staircase perpetually on the brink of collapse. The interior scenes are bolstered by impressive production values that lend the homestead a suitably grimy feel, and allow Owen to showcase some clever shots. As Black ventures away from his new home and out into the island, he makes a few uncanny discoveries that hint at the encroaching horrors. During these early stages, it feels as if anything is possible. But the film falters as it attempts to come good on its promises. For Black and for the audience, the worst yet to come.

As Black’s visions and bump-in-the-night visitations come with increasing regularity, Hughes’ performance, stifled by an undercooked script, can’t quite match them. The notion that Black is approaching the brink of insanity never rings true. He remains too contained throughout, his ultimate undoing underscored by little more than a few muffled sobs.

Greta Scacchi is given little to do as Black’s mother, a one-note miserymonger who exhibits the kind of unnecessarily over-the-top mean-spiritedness that also plagued Owen’s debut. As the mystery surrounding Rachel is unravelled, Black’s wife is done a disservice by lackluster writing too, stripping her of any agency—all she’s given to muster is a limp, “Why?”—and the film of a potentially powerful climax.

Given Black’s sins, Shepherd seems strangely, disappointingly equivocal about his fate too. Rachel is just another underwritten woman dead to fuel a dull dude’s story. This is a cold film, and not always in a good way. There’s an unpleasant grain of nihilism in all of Owen’s works thus far, and there’s a baseline warmth absent from Shepherd that might otherwise have helped audiences better sympathize with its characters and its emotional beats land with the force they deserve.

The pace and action may have been dialed down, but Shepherd is at least a step up from Owen’s debut. The ideas and intentions are clear, even when they don’t work. The film’s biggest failing, though, is that its writing and characterizations are not robust enough for it to succeed as the serious meditation on guilt and grief that it strives to be. As it is, Black sets off in search of himself but doesn’t like what he sees. Depending on your patience, you might not either.

Shepherd had its world premiere at BFI London Film Festival.

Shepherd‘s atmospherics remind of the brooding cinema of Robert Eggers. But while Russell Owen’s sophomore effort is a step up for the director, it’s held back by some thin character development.