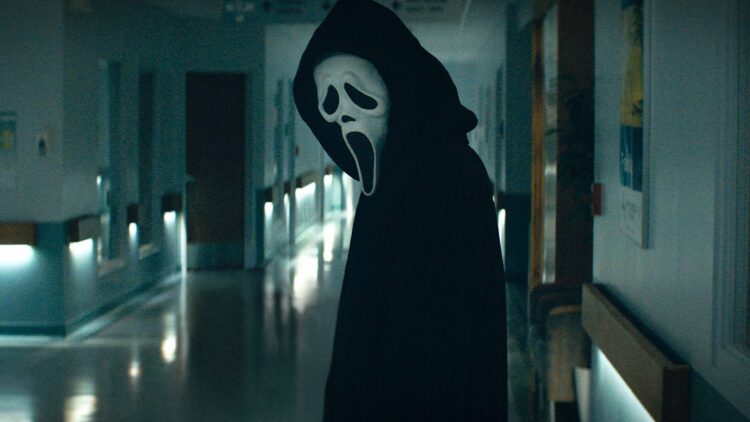 Ghostface is back, babes. Today we’ve scored our first look at the upcoming fifth Scream installment in the long-running—and forever iconic—horror franchise.

These first look images and conversations arrive less than a day after the first poster for the new movie dropped, slashing up our feeds with its steely glory. Well, don’t get comfortable horror fans. Today is a brand new day.

Don’t Call It a Remake

Luckily for us (and them), all three Scream mainstays—Neve Campbell, Courteney Cox, and David Arquette—did agree to return for the fifth film. As it turns out, this was mostly due to the quality of the new script, written by James Vanderbilt and Guy Busick.

“I genuinely was in two minds,” shared Neve Campbell. “The idea of making these films without Wes Craven seemed challenging to me. I loved the man very much. But Matt and Tyler wrote me a letter, speaking of their appreciation and great respect for Wes Craven, and speaking of the fact that the very reason that they are directors today was because of these movies and because of Wes, and that meant a great deal to me.”

Quality script aside, the return of Kevin Williamson to the producers chair also helped ease the mind of our returning heroes.

“Knowing that Kevin Williamson was an executive producer on it set me at ease,” Arquette added. “He really knows the tone. I mean, he set the whole world up!”

As Neve, Courteney, and David were settling into a new routine, it was impossible to avoid the elephant in the room. Scream is synonymous with Wes Craven, the grandfather of horror, who tragically passed away in 2015.

“From the second I walked on the set, I felt extremely emotional and felt a real missing and longing for him,” Cox told EW. “He had such a special, kind, and caring quality about him, not to mention his incredible talent as a filmmaker. I looked up to Wes immensely professionally but also as a friend. I feel Wes would be so happy with the way Matt and Tyler have rebooted this franchise.”

Arquette adds, “I’m not overly religious or anything, but I definitely was speaking to him, praying about it. It brought back a ton of memories of Wes, and that was emotional, you know, but it was beautiful. There were little signs. There were certain takes where the wind would blow, and, I don’t know, I just felt his energy.”

What do you think of these first-look images for Scream? Let us know in the comments below or on Facebook, Twitter, or Instagram! You can also hit me up on Twitter via @joshkorngut. I’m always down to talk all things Ghostface.