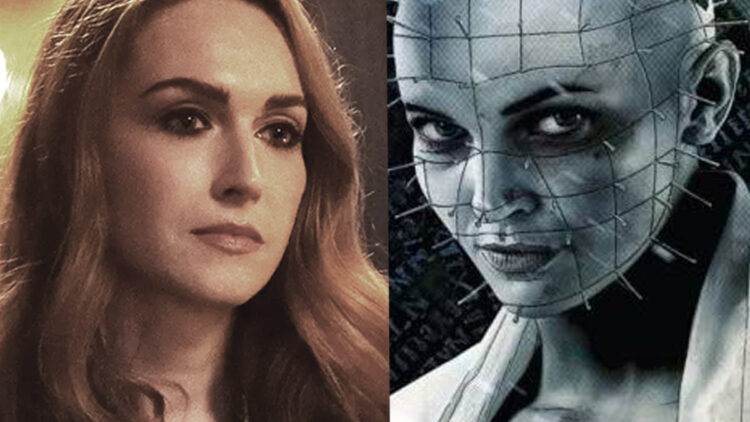 Big news today for the forthcoming Hellraiser production. Jamie Clayton (The L Word: Generation Q) is reported by THR to be starring as Pinhead in the upcoming 2022 reboot. The film recently wrapped up production in Serbia.

Word of a gender-swapped Pinhead has been circulating online for quite some time now. Previous reports eyed Odessa A’Zion for the role of the lead cenobite; A’Zion is officially cast in the Spyglass reboot, but no word yet of what her role will look like.

If a gender-swapped Pinhead sounds strange to you, check out the original novella “The Hellbound Heart”. In Clive Barker’s story, the head Hell Priest was never described as explicitly male. The BOOM! Studios comic books (pictured in the feature image) have already incorporated a female Pinhead a number of times and it was cool as hell.

Clive Barker is finally returning to the producer seat for this new production. Barker recently won a legal battle to obtain the rights back to his franchise and will retain the series on Dec 19th. We expect more exciting Pinhead content from him further down the line.

Speak of the devil, Barker has been positive about the current film, telling THR:

Having seen some of the designs from David Bruckner’s new Hellraiser film, they pay homage to what the first film created, but then take it to places it’s never been before,” he stated. “This is a Hellraiser on a scale that I simply didn’t expect. David and his team are steeped in the story’s mythology, but what excites me is their desire to honour the original even as they revolutionize it for a new generation.

You might remember Bruckner’s name from when he gifted us The Night House and Netflix’s The Ritual. He’s definitely an exciting choice to bring Hellraiser back to life.

The original classic phantasmagoria was based on Barker’s novella The Hellbound Heart. Both the novella and the original film revolved around nightmarish begins from a different world, named Cenobites, who are summoned to our dimension by a mysterious puzzle box. The original Hellraiser film series featured horror icon Doug Bradley as the head Cenobite aka Pinhead. No word yet if he will be making a cameo in the new film

Lastly, what do you think about the upcoming Hellraiser? Let me know on Twitter via @joshkorngut. I’m always down to talk about all things horror! You can also let your voice be heard in the comments below or on Facebook, Twitter, or Instagram! Dread Central is now on Google News!