The 'Candyman' co-star says he "never thought a horror film could make me scream, cry, and laugh as often as this one has." 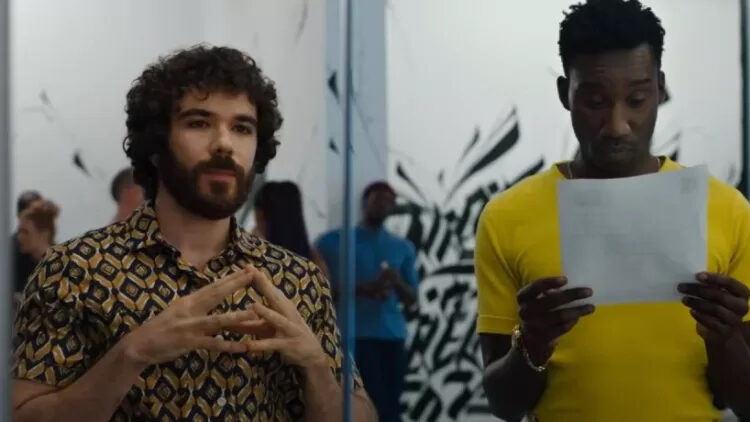 Nia DaCosta’s Candyman has only been in theaters for a week, but it’s already one of the most buzzed-about (pun intended) horror movies in years.

In Nia DaCosta’s socially conscious shocker, artist Anthony McCoy (Yahya Abdul-Mateen II) fixates obsessively on the legend of Candyman, and art gallery director Brianna Cartwright (Teyonah Parris) curates his work inspired by that local lore. Their relationship is professional and romantic in equal measure, so naturally, they spend an evening in with Brianna’s brother Troy (Nathan Stewart-Jarrett) and his boyfriend Grady (Kyle Kaminsky), listening to their telling of the murder of Cabrini-Green.

As Grady, Kyle Kaminsky manages to buck gay stereotypes in his limited screen time. Most notably, he isn’t ritualistically killed off when the slasher proceedings kick into gear. He and Troy bicker like any committed couple, but that dynamic is more a subtle touch of realism than it is a bad excuse to put them in peril.

Dread Central sat down with the actor to discuss how he approached the role, working with DaCosta, and how horror fans might react to this new Candyman.

Dread Central: Tell us about your character in Candyman.

Kyle Kaminsky: Grady is Troy’s new boyfriend. Troy [played by Nathan Stewart-Jarrett] is super sophisticated and privileged. He definitely demands the finest things in life. Grady is a little more laid-back, easy-going, and chill; he’s batting a little out of his league with Troy. Troy definitely can have some biting wit that can lead to some judgment. But Grady’s not afraid to step up and check him and keep him in his place. They have this really beautiful give and take where Troy’s the alpha and Grady’s OK with that. But they have such a playful relationship that it works and I really hope that that plays on screen.

DC: What makes your character unique or special and how did you approach the role?

Kaminsky: I think Grady is just a super grounded, laid-back character in this film where all this craziness is happening. I think that’s what allows for the special elements of this character. The way I prepared for this character in this film, you know, was by working with Nathan Stewart-Jarrett who plays Troy. He’s just an incredible actor as well and so fun to work with. We met a couple of times to develop our relationship background and our histories so that when we got on screen our characters felt lived-in. And then allowing whatever Nia’s direction that happened on set to sort of filter and color all of the characters we had been working on.

DC: It’s perfect that you mentioned Nia because my next question is: What was it like working with the rising Queen of Horror?

Kaminsky: I just got chills when you said that! She is a visionary. She is a brilliant director. She deserves all the credit. This film is absolutely incredible. She has this uncanny ability to make everyone on set feel so welcomed and warm and allow people to explore their creativity in a way a lot of directors don’t. And she just created such a beautiful environment and had a very clear vision for what she wanted but encouraged us to also participate in making choices. And if she liked them we would flow with it. I am ecstatic for the world to see Nia DaCosta because she is a name that’s going to be around for generations and I’m really excited and proud of her for everything she’s done.

DC: Are you a fan of the original Candyman and how do you think fans are going to react to this “spiritual sequel”?

Kaminsky: I am a fan of the original. I was one of those kids who would have a sleepover and go before the mirror and say “Candyman…” almost five times! And then get really scared and run away! And then we’d try and go to be but we thought we saw him even though it wasn’t really him… But it was nice to revisit because I hadn’t seen the movie in a long time and it was cool to see the movie through a different lens as an adult. I think the fans will really appreciate the choices Nia made and the ride they are about to go on—because Candyman is an emotional roller-coaster. I never thought a horror film could make me scream, cry, and laugh as often as this one has. There’s so much meaning and intention behind every choice. I really hope the original fans see all of that.

DC: We love hearing about antics that happened behind the scenes. Any crazy behind-the-scenes stories to share with us?

Kaminsky: Some of these shoots would go on all night. We’d be hanging out at 3 in the morning and we still have three more hours of shooting and we haven’t got the shot we needed and we’re all exhausted. Nia comes upstairs and she’s like, “Alright guys, get up…” She puts on some loud music and she starts dancing. And so we all just start jamming out having the time of our lives! And all of a sudden, we all feel energized like we each just drank five coffees. We were ready to go! That’s what I mean about her creating such a beautiful, warm environment that really supports the actors. And that was one of my favorite moments. I was like, “Wow, she’s actually here for us and she wants us to be in a space of play,” and I really appreciated that.

DC: Is there anything else you’d like to tell our readers?

Have you seen Nia DaCosta’s Candyman? What do you think of our exclusive interview with Kyle Kaminsky? Let us know in the comments below or on Facebook, Twitter, or Instagram. You can also carry on the convo with me personally on Twitter @josh_millican. Dread Central is now on Google News.