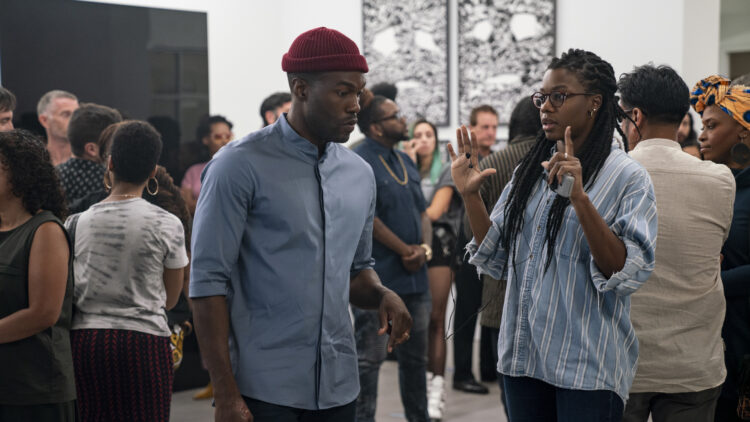 Yahya Abdul-Mateen II and director Nia DaCosta on the set of Candyman. Photograph by Parrish Lewis

Monkeypaw Productions CEO Win Rosenfeld listened to Jordan Peele talk about a possible remake of Candyman for the better part of a decade. But once they were ready to hire a director for the project, they made it their mission to avoid attaching a household horror name.

“We knew what we didn’t want, and that was someone known for being a horror director,” says Rosenfeld in an interview with Filmmaker, alongside Monkeypaw director of social impact, Keisha Senter. “Hiring someone focused solely on jump scares and terror, while obviously important to a horror movie, just wouldn’t work with the soul of this Candyman.”

Rosenfeld, who also co-wrote Candyman with DaCosta and Peele, says the Monkeypaw team was initially impressed with the director’s debut feature, Little Woods. The Tessa Thompson-starring crime thriller first put her on the map when it world premiered at the Tribeca Film Festival in 2018.

“We were moved by Nia’s ability to build out character relationships in an equally dynamic and grounded way,” Rosenfeld explains. “I know that probably sounds counterintuitive, right? To look at a film like Little Woods as a comp for Candyman—but to us, her film was exactly what Candyman needed.”

DaCosta’s two episodes of the British crime series Top Boy, Rosenfeld adds, also caught the eye of the production team. Rosenfeld believes that Candyman editor Catrin Hedström’s work with DaCosta on both Little Woods and Top Boy gave the director added confidence and trust in their creative process, which would require that they move away from the conventional rhythms of most horror movies.