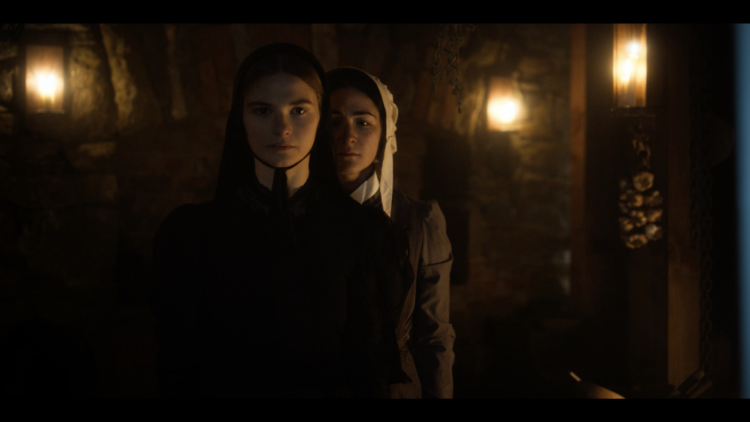 The Last Thing Mary Saw, poised for its World Premiere at Fantasia International Film Festival on August 15, 2021, is a terrifying, gothic debut from writer/director Edoardo Vitaletti. Heavily influenced by Scandinavian art and even Argento’s own masterwork, Suspiria, The Last Thing Mary Saw nonetheless remains a beast all its own. A conscious, heartrending, and terrifying spiral into hypocrisy and judgment, it’s a frighteningly mature debut feature, one more audiences will have the chance to check out in Early 2022 following an acquisition from horror streamer Shudder.

Dread Central was thrilled to have the opportunity to talk with Edoardo Vitaletti about his genre influences, the Nordic influence in his debut feature, his star-studded cast, frustrations with Catholicism, and more.

The Last Thing Mary Saw will have its World Premiere at Fantasia International Film Festival on August 15, 2021.

Synopsis:
The Last Thing Mary Saw is a period occult drama set in an isolated farmhouse in the winter of 1843, where a young woman is under investigation following the mysterious death of her family’s matriarch. It soon becomes apparent that ageless forces are at play, from within and without. With a talented cast and stunning visuals, you can’t miss it. It stars Isabelle Fuhrman (Orphan), Stefanie Scott (Insidious: Chapter 3), and Rory Culkin (Lords of Chaos).


Dread Central: One of the first things I wanted to ask about was working with Stefanie Scott, Rory, Culkin and Isabelle Fuhrman. They have a pretty extensive, between the three of them, history in genre film. What was it like working with them? What did they bring to the table for their characters?

Edoardo Vitaletti: The short answer to that is that it was nothing short of a treat. An amazing experience and I think because these are three people that are very familiar with the genre, just generally speaking. These are three incredibly curious actors. What they brought into this is we had a chance to really build this world together, to build a characters together. A lot of the reference that I gave them, and a lot of reference that they gave me was how do we portray these people and these characters that come from a time that, of course, none of us have lived in? And while working with them, aside from the usual kind of psychological breakdown that you do with your character is when you build them up, it’s a lot of body language.

It’s a lot of work and they came into these challenges very excited, very prepared and they kind of shocked me as far as to how prepared and how they managed to adapt themselves to kind of jumping back in time like a hundred and sixty or seventy years ago. Things like changing their accents to sort of changing their body language– really bringing this world to life through that. Of course, they’re very experienced actors. This being my first feature, having the kind of insight. These are people who work well, who know how to deliver. That was very helpful and we developed a great relationship.

DC: This was your debut feature. What was that like? Where did the idea for The Last Thing Mary Saw come from? What inspired you and led you to know that this was the story you were going to tell?

EV: This story and especially the two main characters, played by Isabelle and Stefanie have been kind of growing in my head for a while before I started writing. Typically, when I write and when I’m thinking of stories, my entryway into this project, as it tends to be, is very visual and very painterly especially. A lot of the research and studying that I was doing on my own at the time a few years ago, I started looking up a lot of Nordic European art a lot of Scandinavian paintings as well, and I noticed a few interesting visual threads. One of them being the funeral.

So a lot of Scandinavian art that deals with this type of iconography and you know family members gathered during a wake. It’s very dark, very stark life, very natural light, with candlelight at night. So just looking at a lot of those images, some ideas started to come into focus. Then similarly with these two characters, a lot of that iconography was the representation of female characters in these beautiful period houses in the 19th century. Everything started to come together.

I knew that I wanted my first feature to be within the genre space because I really like it. And I think, some of the movies that have interested me the most over the past two years fall under the genre umbrella. The thriller, horror, drama umbrella. So it started with the paintings, and then I started to write the story with a lot of fascination with the research I was able to do at the time.

The movie is fictionally set in New York State. That kept informing the story. Added to that, of course, was my own personal background. I’m from Italy. I was raised Catholic. A lot of the antagonistic forces that are a part of the movie, those kinds of obsessions, are things I grew up around. So, I wanted to explore that and shed a light on those frustrations, some of that negativity. Altogether, I guess, it’s all of those things that came together to tell the story I did.

DC: Really cool that you’re a genre fan. Are there any particular movies recently, maybe anything from the past couple of years, that really informed or inspired you?

EV: I think we are living in a great time as far as genre because a lot of the movies that have come out recently and over the past five or six years, are very great. Genre is being taken very seriously. When I think of movie references, I tend to go back a little bit more in time. Ever since I watched Suspiria the original Suspiria from the 70s a few years ago. There’s something about the figure of the matriarchal, kind of imposing character. It’s a very, very frightening character. It inspired me to create an antagonistic force like that. The one that’s in the movie played by Judith Roberts. So, definitely that movie in general, the trilogy of the Three Mothers. That was inspiring to me. The Witch, too, of course, a few years ago when that came out. That’s a movie I truly admire. The atmosphere, the precision in representing the time.

Suspiria, though, a lot of inspiration came from that. It was always my idea to make a movie that had that kind of antagonistic force. Now, my movie doesn’t really resemble the original Suspiria in terms of visual style because my movie is a little more restricted than that. I was mentioning, of course, over the past few years, I’ve admired The Witch a lot for its atmosphere and the precision it had representing an area of the U.S. that has a lot of folklore. There’s a great movie that I actually kept a lot in mine while making mine. It’s a Norwegian movie from a few years ago. It’s called Thelma. I found it to be so brilliant. I remember watching it while preparing my movie. It was brilliant, so grounded with the psychological breakdown of this beautiful main character. It’s so terrifying and unnerving. It looks really beautiful. I don’t really hear it mentioned too often, but it is one of the better genre pieces that came out in recent years.

As I was preparing the visual style of my movie with my cinematographer [David Kruta], we were looking at a lot of older references from European cinema, like a lot of Bergman movies. Those with the restrictive still camera movements and the darkness. I’m typically very careful when I’m writing or preparing a movie as far what I watch and how much I watch, because you don’t want it to trickle into your script.

DC: It’ll be cool to see The Last Thing Mary Saw in that vein now, definitely. Now, I don’t know if you’ve had a chance to catch it yet, but the Fear Street trilogy on Netflix…

EV: I’m planning a whole Fear Street binge day. So, I haven’t seen it yet, but it’s a plan that’s in the works. I’m very interested in it.

DC: One of the things it did really well was apply these queer elements to different horror subgenres. As a queer person myself, that was something I really appreciated in The Last Thing Mary Saw, because it’s not something you often get in the horror genre. Was that something that was really important to you in this movie?

EV: It was definitely important. I think ever since I began to think about the story, the fact that it would revolve around my two main characters with their personality; it was always kind of there from the very beginning. From the inception of the narrative. And I think it’s ultimately the thing that really stuck with me, thinking about them. Being from Italy, which is, as far as the religious preferences go, a fairly homogeneous country, I was always taught, I was always introduced to the idea of Catholicism as a cult of inclusivity, like a philosophy, that God loves all people, no matter what their life is. You quickly realize that it’s kind of the opposite. God seems to love you except for this and except for that. Except with your divorce, or if you’re born out of wedlock if you’re not straight. Basically, if you didn’t buy into a very specific box, it was a culture of exclusivity, in my opinion. Through this movie, I want to expose that and my frustration with that. There is a disconnect for me. It was a very specific idea of what was right and what was wrong. The horror genre, I think, lends itself very well to a story like this, into this kind of frustration, because it is a very horrific experience and a very frustrating one.

That was kind of my entryway, personally. They were always kind of there in the script like those two characters. The fact that they wanted and what they were like emotionally, they stuck with me right from the beginning in the script.

DC: I think a lot of audiences are going to pick on those threads. They’re going to find a lot of relevance and it’s going to resonate with their own lives.

EV: I was always interested in that when I was writing it. I was always very determined to start the movie with who they are to each other being very clear to them. The movie begins and they’re like the family and the characters surrounding them. They’re so obsessively preoccupied with this relationship, that’s never quite put into question, and that was very important to me. I wanted to portray it in a way of just wanting something emotionally that you don’t believe is wrong, but that everybody else around you thinks is wrong. It came very natural. It was something emotional to get attached to. There’s not much questioning in their heads whether what they’re doing is wrong, and that’s something that really mattered to me. The idea that it was something worth fighting for from the first segment until the very end. That was very important to me. Absolutely.