Umberto Smerilli explains how he created a postmodern spirit for the film. 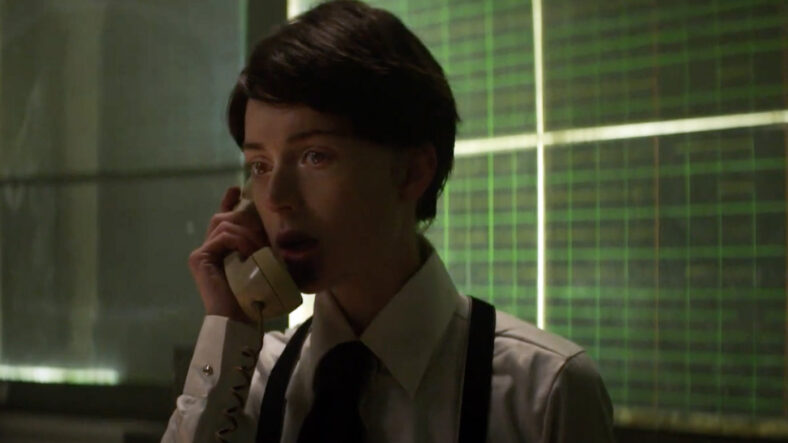 Shudder continues to step up its original content game, with recent movies such as The Scary of Sixty-First and The Seed premiering this month. Another new original film now available on the horror-focused streaming platform is the deadly role-playing tale, The Bunker Game.

Directed by Robert Zazzara, the film’s official synopsis is as follows:

After several mysterious accidents, a live-action role-playing game is interrupted and the players leave the bunker while the staff remains behind to investigate the disappearance of Greg, the mastermind of the game.

The Bunker Game has a very art-house feel to it, probably because the film’s director is also a cinematographer. But it’s the film’s score by Umberto Smerilli that helps accentuate this fact even more. After learning that Smerilli used everything from Tibetan bells to original instruments he built himself for the score, we spoke with him more in-depth below about the process for creating The Bunker Game sounds.

Umberto’s score for the film is also available digitally, with two new versions of the Italian classic, “Parlami d’amore Mariù” included, as well as a remix by Bewider. You can listen here: https://www.amazon.com/Bunker-Original-Picture-Soundtrack-Explicit/dp/B09V5RRZ38

Dread Central: How did you get involved with The Bunker Game?

Umberto Smerilli: The director, Roberto Zazzara, and I have been collaborating for years. Because of this, we share a common language and a shared vision of cinema in general.

Not only do we work together, but we also have a ton of fun watching movies together, analyzing everything from the photography, music, and film direction. So when The Bunker Game was greenlit, he recommended me to the producers. After a thorough audition process, I was hired.

US: The Bunker Game score is inspired by a strong postmodern spirit. The movie revolves around the theme of a past history that haunts the present. So the soundtrack reflects this concept. It is a quite complex score in the fact that very different elements coexist. There are references ranging from classic cinema and Bernard Herrmann’s style to the Opera, but also some techno beats and electronics. The bunker is like a present maze, in which you can find relics from the past coexisting in a superposition of states. It’s as if we were lost in a sort of quantum mechanics of consciousness. The soundtrack expresses this feeling.

DC: What did you do to prepare for your work on The Bunker Game?

US: My first step was to analyze the script. In general, my approach is always to search for concepts and ideas that are implied or hidden in the story and try to dig them out. So, my work is very conceptual in the early stages. I then follow the flow and let the music go where she wants because music has its own needs.

When I first start a new project, I always go straight to the piano. I am very old-fashioned in this way, even if I end up in a deep techno track full of acid rough synths. And this was exactly the case with The Bunker Game. When I realized that the bunker was like a character in itself, I asked myself how to make the setting feel alive. For this reason, I researched the timbre thoroughly. I embedded the sound of bowed, rusty, metal sheets in the score and asked for unconventional techniques from the string orchestra. There is nothing taken for granted in the timbre of this score.

DC: Because you are based in Rome, do you think your approach was different?

US: I studied film music at the Italian National School of Cinema. I had the opportunity to know professor Federico Savina, who is an absolutely amazing sound engineer. He is the man who recorded immortal film scores of Italian cinema, working with directors like Fellini, Antonioni, Visconti, Leone, and composers like Morricone and Rota. Savina’s “vision” of sound and music in movies deeply influenced mine. He gifted me with little secrets I’ll always thank him for. Due to this passage of knowledge, I feel a strong connection to the tradition of Italian cinema. My adventure in the film industry started and continues in Rome nowadays, where I can still breathe this history in the air.

DC: Is there a scene in the film that was particularly hard to score? Why?

US: There is a big scene in which Laura, the protagonist “feels” the past experience of the ghost and embodies its deep pain. It’s a very dramatic moment, and we wanted to draw into this drama with the protagonist. We leaned into traditional Italian Opera for this, trying to give an operatic breath to it. What we needed was just the scope and the width that Puccini’s scores have, and their ability to deal with emotions deeply rooted in our nature. So, I borrowed some of those tools from him and reimagined them. The challenge was to make drama coexist with horror.

DC: Especially in the horror genre, we have heard of composers using found objects to create eerie sounds for their scores. Did you do anything like this?

US: Yes of course! This was probably the most fun part of the job.

The score is full of any kind of bowed metal, ranging from big bronze plates to Tibetan bells and many more.

My best achievement in the field of unconventional instruments was inventing and building the Smerillophone, which is a wind instrument that is essentially a plastic tube connected to a saxophone mouthpiece. It’s nothing particularly new. But, given that I used to be a free jazz sax player, I have a wide toolbox of unconventional techniques to be applied to this instrument borrowed from the sax. The Smerillophone was an amazing tool to depict the dark resonating tunnels of the bunker.

DC: Because you and the director, Robert Zazzara, have worked together before, did he allow you to have a little more freedom with the score? Or did he have a specific vision in mind?

US: Roberto and I really worked together coming up with ideas through experimenting and discussing. He clearly had his own vision of what he needed before I started composing. But the outcome is the result of the process, not of the premises. It’s not even the sum of his vision plus mine, maybe the product.

DC: Your score for the film is getting released. Do you have a favorite track from the album?

US: Probably my favorite track is “Possession” because it’s a sort of a suite that gives the scope of the variety of the music linking themes and timbres very far from each other. I also love the fact that this track is not a post-production edit, but it’s exactly what happens in the movie edit.

DC: What are some of your favorite horror films?

US: As a child I couldn’t sleep for many years because of Profondo Rosso by Dario Argento. I’m still very fond of this movie.

I really loved Hereditary by Ari Aster and The Witch by Robert Eggers. I was also really impressed by the scores of these movies, so many thanks to Colin Stetson and Mark Korven for helping influence The Bunker Game score.