Hidalgo's own experiences with Catholic guilt deeply influenced the film. 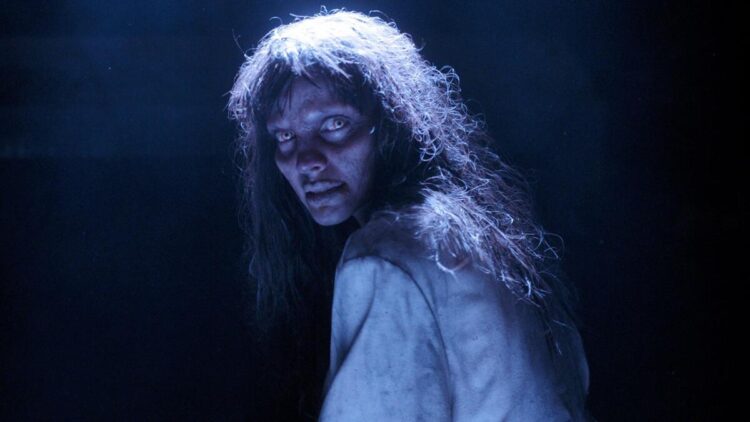 With director Alejandro Hidalgo’s feature The Exorcism of God now in theaters, on-demand and digital via Saban Films, Dread caught up with the filmmaker to discuss the supernatural horror film.

The film centers around

“Peter Williams, an American priest working in Mexico, (who) is considered a saint by many local parishioners. However, due to a botched exorcism, he carries a dark secret that’s eating him alive... until he gets an opportunity to face his own demon one final time.”

Dread Central: We first met at Screamfest in Los Angeles in 2014 for the premiere of your film The House at the End of Time. Since that time, I’ve waited rather impatiently for your next film. Personally, for you as an artist, what was your road to The Exorcism of God?

Alejandro Hidalgo: I started working on this film as soon as I finished The House at the End of Time. Then, I had no higher expectations than to produce a terrifying, commercial, and shocking film. Initially, I wasn’t the director. I was only the producer, working hand in hand with a very talented female director called Gigi Romero. However, over the time the project passed into my hands, I took it as my own. I brought my vision and finished developing my own original story alongside the screenwriter Santiago Fernández.

My impulse to produce and direct this film got multiplied after the remake of The House at the End of Time, where I was attached as director, got stuck in development hell at New Line Cinema. So, I filled myself with the courage to start a new project. I worked obsessively on this script, and managed to raise the funds in record time.  We shot the film in Mexico, not only looking to pay homage to my favorite horror film of all time The Exorcist, but by also telling a very dark story, filled with supernatural horror, existential dilemmas, some powerful plot twists, and very creepy creatures.

DC: The possession sub-genre, given the artistic heights of William Friedkin’s classic 1973 film The Exorcist, is a challenging sandbox to play in. Yet with The Exorcism of God, you not only paid homage to the former, but also brought something new to the genre. Did you find this a difficult task?

AH: While we were writing the script, at first it was only a couple of priests trapped in a sinister prison full of possessed women. But, more powerful ideas began to take shape in our minds. The supernatural horror opened the door to the story of sacrilege and sin, of a man tormented by his guilt who must redeem himself as the only option to save the possessed girl. But if he does it, he wouldn’t just lose the opportunity to save his loved ones; he would be excommunicated and lose his home.

I love stories sustained in the biggest dilemmas, in which the protagonists must make the hardest decision of their lives to reveal their true human nature. During the creative process, we also got ​​the main twist of the film. It’s associated with the concept that if we can be possessed by the Devil through our sins, we can also be possessed by the light of God through forgiveness and love. In short, all these fresh ideas were part of a very exciting creative process that we really enjoyed. We never had the purpose of surpassing a masterpiece like The Exorcist; that is just impossible.

DC: Having grown up Catholic myself, as you did, I found the film’s themes of guilt and atonement to be one of resonance. In what ways did your Catholic upbringing inform the story, both in large strokes and small?

AH: My Catholic upbringing is clearly the most important influence on this story. To go deeper on this, I would like to share an anecdote with you.

When I was a preteen, I studied at a Catholic high school. My classmates were only boys, no girls. One day the priests took us to mass and talked about the confession to us. It seemed beautiful to me the fact of cleaning your soul by just asking the mercy of God.

Then, I remember the priest told me that one of the worst sins was lying to God during a confession, because God will always know the truth. So, I remember that for an hour, I was absolutely wracked with guilt. Then I confessed the truth to the Priest.

This film invites the audience to recognize God where love and forgiveness are and not where darkness and corruption exist. The church, as an institution ruled by men, can also fall into sin. However, my intention was not to demonize the church. In my life, I’ve met extraordinary religious people with beautiful hearts. That’s why you can find pure characters in our film like the nun Camila.

DC: The opening scene is chilling, as is the very original and quite terrifying realization of a demonic Christ. Can you discuss your approach in crafting both?

Regarding the Demonic Jesus, I wanted to share my biggest fear during my childhood. After watching many horror movies like The Exorcist and The Omen franchises, my mind shaped my worst nightmare. What could be the worst fear for a person of faith than seeing their own God turned into a sinister demon? I think I was able to imagine this because as a Catholic child I was praying to a man who brought the most beautiful message of love. But his image was of a crucified man, filled with blood and suffering.

This dark character also worked perfectly to haunt our protagonist Father Peter Williams. He has a dark secret, a sin. He’s asking for the mercy of God, to be only attached by a perverse version of Jesus. I think this is one of the most macabre creations in the movie. I like the horror it brings to the audience.

DC: The Exorcism of God is your first English language film. Yet it feels absolutely immersed in midwest American culture, which is beautifully captured. In working with your director of photography, what was important to you? Nearly every frame of the film could double as a meticulously composed still.

AH: We basically designed two visual universes. On the one hand, we wanted to extol the beauty of German Expressionism for nighttime and horror sequences, by playing with high levels of contrast and shadows. Above all things, we wanted to create a battle between warm and cold temperatures that would symbolize the eternal battle between good and evil.

On the other hand, we desaturate colors during the daytime scenes, to highlight the poverty and suffering of a Mexican isolated town, but by also showing its extraordinary natural beauties. In this sense we have a film with some “Naturalism” to delve into the drama, as opposed to “German Expressionism” to generate atmospheres of darkness and desolation within the genre.

DC: This film is a shot in the arm to the horror genre, in my estimation, and I’m excited to see what’s next. What stories are you yearning to tell?

Alejandro Hidalgo: I’m working on several projects at the same time. For now, my priority is to produce and direct the American remake of House at the End of Time. It’s a spectacular story, with great moments of horror and suspense, and above all things, with an absolutely moving and mind-blowing twist.

I am also attached to an adventure-horror project called God Pool that may be filmed this year in some amazing caves in Ecuador. I am also considering the possibility of creating a sequel and prequel to The Exorcism of God, as well as a science fiction project that I have been writing for eight years.