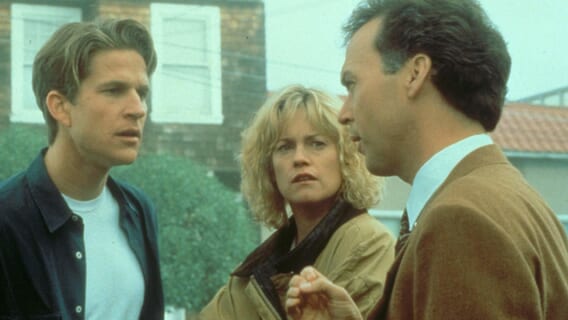 I am pleased to be showcasing a film this week that never fails to get under my skin. Pacific Heights is a psychological thriller with strong horror overtones. In fact, it’s terrifying enough that I am tempted to just brand it an actual horror film. The intensity is cranked up to the point of being almost unbearable. So, with that in mind, I will refer to it as a psychological horror thriller from here on out.

Pacific Heights follows San Francisco yuppies Patty (Melanie Griffith) and Drake (Matthew Modine) as they stretch themselves beyond their means to purchase their dream home. The plan is to lease the downstairs rental units to help cover the massive mortgage payment. Under different circumstances, Drake and Patty’s plan may have gone off without a hitch. But seeing as this is a psychological horror-thriller, deranged tenant Carter Hayes (Michael Keaton) moves in and plans to drive the property into foreclosure, only to buy it out from under the young couple.

Part of what makes Pacific Heights so engaging is that it effectively takes what is supposed to be a sacred and safe space and turns it into a living nightmare. Our home is meant to be our sanctuary. Our escape from the cruelties of the outside world. And for most people, their domicile is just that. Accordingly, we often take it for granted that our home will always be a secure, happy place.

Due, in part, to their naivete as new landlords, Patty and Drake are given a crash course in just how jarring life can be when your home is no longer a place of solace. They find themselves hurled into a horrifying reality where their new house becomes a living hell from which they cannot escape. And that makes for an intense and often uncomfortable viewing experience.

Also Read: ‘Not Safe For Work’ is an Unnerving Office Invasion Thriller [The Overlook Motel]

Pacific Heights mixes elements of the home invasion thriller with components of the deranged stalker genre. The worst part, however, is that, unlike a conventional home invasion story, their nightmare isn’t over within a single evening. It is ongoing. And each day is more trying than that which came before it. As is commonplace in the deranged stalker subgenre, Drake and Patty must deal with their new tenant’s escalating eccentricities, which start out as a major nuisance but quickly escalate to calculated acts of violence, destruction of property, and so much more.

The flick does a tremendous job of capturing the helplessness Drake and Patty feel and demonstrating how little recourse they have as landlords. Tenants’ rights are in place for good reason. But good intentions don’t do much to stop the deeply disturbed from using tenant-friendly legislation to do their worst.

Also Read: ‘Fear’ (1990) Taps into the Horrors of Second Sight [The Overlook Motel]

Patty and Drake are the good guys in this scenario but the law is not on their side. Even though their nightmare tenant hasn’t given them a dime and he grifted his way into the rental under deceptive pretenses, the law still protects him in doing all of the above. That harsh reality makes a near-perfect premise for a horror-thriller and screenwriter Daniel Pyne (Fracture) uses that notion to great effect in Pacific Heights. With each passing frame, Patty and Drake are depicted as more and more helpless. Each time they try to outsmart their psychotic renter, they end up on the wrong side of the law in spite of standing squarely on the moral high ground.

The intensity of the proceedings is amplified by a stellar performance from Michael Keaton. He is pitch-perfect as charming but psychotic tenant Carter Hayes. He shows real versatility here. Though he is better known for his down-to-earth, nice guy roles, Keaton kills it in this villainous turn. He plays the character as calculated, smug, vindictive, and prolific at manipulation in all its various forms.

Modine and Griffith are also well-cast as Drake and Patty, respectively. They are accessible to the average viewer. They are likable and feel like a real couple. Their relationship isn’t perfect. But tell me whose is? As such, they are easy to invest in.

Late Director John Schlesinger (Marathon Man) knew a thing or two about crafting tension. So, he takes great care in letting us get to know the happy couple and warm to them in the first act. Accordingly, it becomes all the more unsettling when Schlesinger pulls the rug out from under us and rains all forms of chaos down on the unsuspecting yuppies. From there, we must sit back and watch as Patty and Drake’s lives are derailed. That does make this flick a bit tough to watch at times. But I mean that in the best possible way. When the protagonists are faced with adversity, we feel it. We feel their pain. We feel their agony. We want justice for them. And it’s agonizing to see justice denied.

By the time the end credits roll, I feel such a sense of relief. I feel like I can breathe for the first time since things got real. And to me, that is the sign of a highly effective horror thriller.

All in, Pacific Heights is a cautionary tale that delivers high levels of intensity, a great cast, and a nightmarish storyline. If the film sounds like it might be up your alley, you are in luck. Pacific Heights is available to stream via Pluto, Roku, Peacock, Tubi, Plex, and more as of the publication of this post.