They just want to watch the Catholic Church burn. 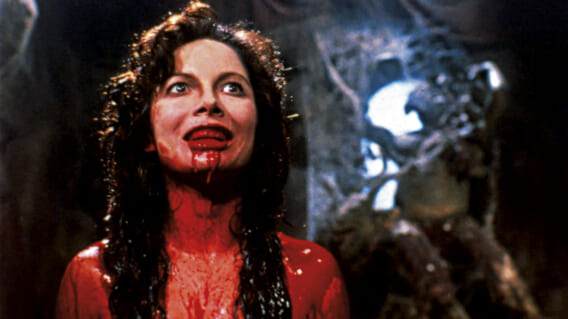 The beauty behind being a horror film fan is when you find that one perfect horror film. Whether it be a highly praised title from critics or obscure titles with a cult following, there comes a film that just resonates with you. While I adore the films of El Santo el Luchador Enmascarado because they were the introduction to my Latin American horror film journey, there’s one film I find perfect. It made me dive deep into these countries and the countless films they have to offer. Alucarda: La Hija de las Tinieblas is the encapsulation of why I love Latin American films so much.

Horror films within Latin America come with a set of politics. While there are North American films that uncover a country’s devastating Indigenous history through aggressive and valid emotions such as Blood Quantum from Canada, Latin American horror films follow suit with similar raw feelings. Their films are just as blatant at highlighting the oppressed history from colonization and the assimilation into European religion. Modern Latine filmmakers are coming out of the woodwork to partake in this act of unveiling their county’s oppression through horror cinema. One of Brazil’s recent examples follows their slasher character on a murderous and violent rampage filled with vengeance against the colonizers who demonized the Indigenous spirits in Skull: The Mask. Due to the director’s style of filmmaking, the tone is light and its themes are subtle.

Alucarda, directed by Juan López Moctezuma, on the other hand, is an overtly angry film that criticizes religion, the church and the patriarchy told through a nunsploitation lens. The story follows Alucarda (Tina Romero) and Justine (Susana Kamini) who spark a relationship and form a pact with the Devil while staying in an underground convent. Father Lázaro (David Silva), the head priest, catches wind of an evil-to-them presence and prepares an exorcism for Justine. After the failed fatal attempt, Alucarda’s fiery rage against the convent becomes lethal and her vengeance begins with destroying the oppression that was bestowed upon her.

Growing up in a religious Mexican household, I experienced religious indoctrination and fell under its spell for many years in my adolescence just like Alucarda and Justine. As I reached my late teens something clicked in me with the help of the more anti-religious side of metal and punk. Tracks like Unanswered by Suicide Silence (rest in peace Mitch Lucker) and Religious Vomit by The Dead Kennedys were on constant rotation in my iPod Nano. Music helped me break free and instilled an anger in me against the trauma I endured.

Almost a decade later and the majority of these emotions have subsided the further I’ve gotten away from that era of my life. In recent years, I began my journey to reconnect with my Indigenous roots and decolonize my mind and conditioned ideologies. Unfortunately, the repressed anger about religion started to resurface as I started to learn about the hidden truth behind how religion oppressed countless Indigenous people within Latin America. This led to subconsciously starting to look for similar themes I once looked for in music within different forms of media. Finding the subgenre of nunsploitation couldn’t have come at a better time.

Nunsploitation as a whole is the equivalent of punk music to me. Of course, there are exceptions, but the majority of these films criticize religion and the patriarchal hierarchy with a simple act of rebellion: being yourself. These women who are trapped within the confines of the claustrophobic walls of organized religion break free from their conditioning and begin expressing themselves and indulging in their desires they were told to repress. The subgenre condones self-consciousness and self-acceptance, while not letting the indoctrination of Catholicism take hold. Just as people have been under immense pressure from the Church and the State, filmmakers brought it upon themselves to start criticizing the source of the oppressed actions. It’s no surprise the rise of the nunsploitation subgenre has been hitting screens during the late 2010s and early 2020s with the rise of bigotted laws favoring Christian beliefs as they are being put into place. As religious oppression is widening, cinema is once again fighting against it just like the anti-religious horror films from the 1970s.

Anti-Religious Mexican Cinema and its Origins

Before exploring the chaotic world Moctezuma created, it’s important to understand some cultural background and political issues that were undergoing in Mexico during the 1970s. This decade, as well as others, was filled with hardship as the Mexican Dirty War was taking place. It was an age when the military opened fire on peaceful protesting students multiple times. A heavy time when activists, teachers, and others opposing the Mexican PRI-ruling government would go missing and nowhere to be found. The war was a violent response from the authority holders after they enacted the bloody Tlatelolco Massacre in 1968.

This moment of political frenzy allowed leaders to take advantage of their positions. One of the most famous examples is a rural priest who generated a lynch mob against university workers by manipulating the situation for his personal agenda. This horrific incident, The San Miguel Canoa Massacre, was cinematically dramatized in Felipe Cazals’ Canoa: A Shameful Memory. This film is a historical landmark in Mexican cinema as it is one of the first and biggest films to openly critique the church and leaders during a time of censorship. This paved the way for Moctezuma to further push the boundaries to depict the ill manners of religion and authority.

The Burning Rage in Alucarda

As mentioned, Alucarda is overt in its themes of rebellion. From the first frame of the film, we are thrown into a room with off-putting religious imagery inside a horrific cave while a mother gives her baby away to a convent. Off the bat, the daunting religious aspects come into play. Aging statues, cobwebs, and death overtakes the mother in an awful cry.

Then the opening credits appear in a haunting synth score with a still from painter Fransico de Goya’s Los Caprichos, a series that was used to criticize religion and humanity as a whole. The rest of the film takes place in a claustrophobic underground convent filled with blood-stained cave walls, a room filled with candles, and a massive crucifixion cross overtaking the background of the frame. The setting is similar to a prison. The isolation is used to keep in all the atrocities within this group of religious fanatics. This is where Alucarda and Moctezuma seek for the oppression to burn.

A subtle similarity that runs between Alucarda and the Women in Prison exploitation films from the 1970s is its depiction of authority. These films, and nunsploitation in general, portray authority figures as sadistic and typically male. Father Lázaro is illustrated as a strict dictator. He shows no remorse to the young women in the convent as well as the nuns. Catholicism is shown as repression and oppression while Satanism is represented as freedom and love.

After accepting the Devil and denouncing God through a series of blasphemous scenes, Alucarda and Justine playfully dance in circles during a teaching given by one of the nuns in the congregation room with the looming Crucifixion and an altar of half-burned candles that covers a whole wall. They scream Satan’s name while the authorities try to control the dancing young women.

This leads to Alucarda’s confession. The confessional scene between Alucarda and Father Lázaro is the first instance where we witness the struggle between religion and freedom. Alucarda wants to continue her life with Justine and states how Father Lázaro, who is the walking embodiment of Catholicism, is to be blamed for death caused by the Church.

In order to maintain his status, Father Lázaro demands an exorcism for Justine as she has become “mad”. The film returns to the congregation room and for the first time, all the candles are burning as they illuminate the cross and Justine tied against a wooden X. The fire is depicted as oppressive as the lighting is both daunting and intimidating. It uses its power and authority to control and invoke fear. In a coven filled with shadows, the light is a negative force.

Dr. Oszek (Claudio Brooks), who becomes a primary character starting from the second act, walks into the convent at the moment Justine meets her fate during the exorcism. In a fit of rage he takes Alucarda to his home and threatens to leak the atrocities happening within the covenant. Moctezuma uses Dr. Oszek, a man of science, as logical reasoning. From arriving on screen he questions the nuns and their practices. His critiques are plentiful and he can’t believe the absurdity of it all. But mostly, the major complaints come from how he disapproves of Father Lázaro’s motives and actions.

Once Dr. Oszek returns to the convent, we come across Moctezuma’s explicit feelings towards religion. Everything that we have seen from the nunsploitation tropes to the anti-authoritiarian themes boils down to a monologue given by Dr. Oszek upon the revelation that the Devil is among them. As the man of science is forced to disregard his schooling in order to finally believe the Devil is present, he states,

This phrase is given right before the sacrilegious climax where Moctezuma acts against the Church through Alucarda. He seeks revenge as Catholicism was used to commit genocide against Emperor Moctezuma II and the Indigenous people of Mexico. In the film, Dr. Oszek has to defend himself against Alucarda and the vengeance she pursues for Justine. She calls for Astoroth. The nuns burst into flames, and havoc sets in. Religious imagery burns into ashes as she calls for Beelzebub. Robes burn onto the nun’s skin and they tumble onto the floor meeting their fate.

Catholicism suffers for the killing of young women under the name of God like Justine. The fire that was once shown to intimidate is transferred into Alucarda’s eyes. Everything in the convent catches on fire with the voice of reasoning, Dr. Oszek, barely escaping with his life. The oppression is left to burn and dissipate.

The cult status behind Alucarda is earned. It grabs the aesthetic of nunsploitation and pushes the boundaries towards a more visceral experience. I firmly believe this film should be considered as one of the greatest nunsploitation films next to Ken Russel’s The Devils. It’s anti-religious and anti-authoritarian themes not only resonate within Latin America, but with the whole world.