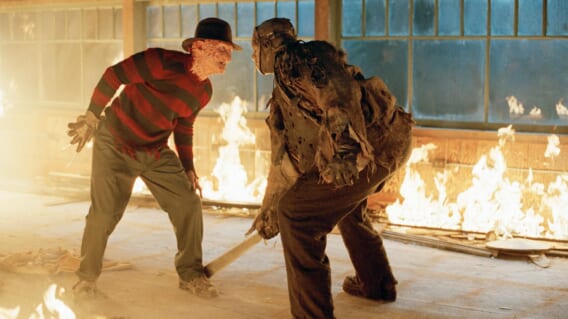 The creatives forces that be are dredging up and revitalizing every horror icon under the sun. Michael Myers is back, slaughtering the denizens of Haddonfield, Illinois. The Predator had what might well be his best showing yet in Prey. New entries in Hellraiser, Evil Dead, Scream, and more have either arrived or are poised to soon. Amid all the crossovers and cinematic universes, the question of a horror battle royale is naturally raised as well. After all, the likes of Dead by Daylight have done as much already, dropping dozens of popular slasher IPs into the same game.

Still, Ronny Yu’s Freddy vs. Jason is arguably the most famous (and ambitious) crossover in horror history. Sure, Alien vs. Predator, Sadako vs. Kayako, and Frankenstein Meets the Wolf Man exist. Yet, nothing captures the quintessential horror novelty quite as well as Freddy vs. Jason.

First conceptualized in 1987, both New Line Cinema and Paramount Pictures endeavored to create a crossover between the two slasher behemoths (sorry, Michael). The creatives couldn’t agree. After the box office failure of Friday the 13th: Part VIII: Jason Takes Manhattan, Sean Cunningham, director of the original Friday the 13th, sought to nab the rights back for a New Line Cinema ordained Freddy vs. Jason. There was a lot of back and forth, including a crossover tease at the conclusion of Jason Goes to Hell: The Final Friday in 1993 and the release of Jim Isaac’s Jason X in 2001 to keep the franchise alive. Ultimately, however, Ronny Yu’s Freddy vs. Jason, scripted by burgeoning franchise scribes Damian Shannon and Mark Swift (they would later go write the 2009 Friday the 13th reboot), would release in August 2003.

Freddy vs. Jason is a lot of things. It’s certainly not the best of either respective franchise. A bauble more than anything, it’s certainly fun and engaging. Yet, when Jason and Freddy aren’t squaring off in hellish pinball theatrics, it offers nothing that hasn’t been seen time and time again. Yet, Freddy vs. Jason endures. Not because it’s a good movie, necessarily, but because it’s a movie that respects legacy. It’s a slasher movie that, more than anything, demands audiences remember the greats.

It’s worth noting that Freddy vs. Jason remains the last canonical entry in both original franchises. The latter half of the early aughts would bring respective remakes for both. In terms of the originals, Freddy vs. Jason, a movie almost 20 years old, remains the last bow of the late great slasher icons. Memory itself isn’t just a peripheral variable. Freddy vs. Jason starts with the (way too old to be) teenagers of Springwood doped up on Hypnocil, a drug first introduced in the Craven-scripted Dream Warriors. Unable to dream, the Springwood teens have forgotten Freddy entirely. Resultantly, he resurrects Jason Voorhees (the two met in Hell, a kind of slasher meet cute) to incite terror among the denizens of Springwood. Ideally, Jason would kill, Freddy would get the credit, and that fear would be enough to resurrect him for good.

Of course, it doesn’t go as planned. Jason does as Jason is wont to do and keeps killing. He goes so far as to steal potential victims from Freddy’s clutches. That’s a slasher faux pas. Soon, the two are duking it out all over town as a Dawson’s Creek bit player and former Destiny’s Child member amble about, confounded at the ever-increasing carnage. Deeply silly by design, Freddy vs. Jason is wise enough to just be a silly crossover, nothing more or less. There are few, if any, genuine attempts at tension. It’s a surreal, ridiculous movie, far removed from the canonical reality of either franchise. As incredulous as both Freddy and Jason grew, they’re on an entirely different level here.

Yet, Freddy vs. Jason accomplishes what it endeavors to accomplish: a final hoorah for the slasher greats. Once the tentpoles of not just slashers but horror in general, their respective legacies are waning. Inoculated in a community of horror fans, it’s easy to think of their legacy as being stronger than ever. Outside of that community, however, neither generate much awareness. Don’t let Pretty Little Liars: Original Sin fool you. Gen-Z might as well be on Hypnocil.

In an interview with Rue Morgue (republished on MovieWeb), asked about whether audiences could expect a sequel, director Ronny Yu remarked, “Oh yeah. See, I think of this as the first film in a series, not the 20th. We’re kind of forgetting everything that’s happened before and starting from scratch while at the same time showing flashbacks… like a refresher.” No sequel came to be, with Freddy vs. Jason consigned to cinematic memory alongside their hundreds of victims.

With no sequel and few, if any, chances of another crossover, Freddy vs. Jason endures then as the preeminent sendoff. A movie about not just memory, but the memory of Freddy and the memory of Jason. Retroactively, the movie imbues itself with a wistful, inimitable quality. It’s a time capsule for an era when Jason Voorhees was on Arsenio Hall. An era where Freddy Krueger was the definitive boogeyman. It probably won’t ever happen again. Arguably, it doesn’t need to. There are plenty of contemporary slasher icons and horror creatives carving out a legacy all their own. The slasher boon might be far behind us, but Freddy vs. Jason reminds us why, even two decades later, it’s a moment worth remembering.