It’s a Roller Coaster of Doom in “Final Destination 3”

It’s a roller coaster of blood. 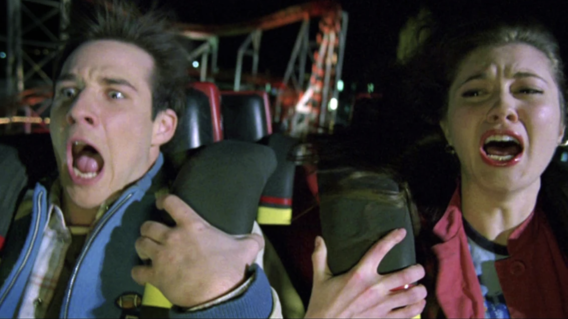 Fans of the franchise love imagining new disaster set pieces. While the franchise has included a plane crash, traffic accident, racetrack disaster (the worst, by far), and bridge collapse, the roller coaster crash is a veritable underdog. The audience experiences an oppressive barrage of foreshadowing as a group of teens board the fictional Devil’s Flight coaster. Hydraulic tubing leaks, the cars trundle, and the tracks themselves shake with the elasticity of rubber. The accident was filmed at the Corkscrew coaster at Playland in Vancouver. The scene was shot using a combination of green screens, replica trains, and real footage of the cast riding the coaster. Of the 344 VFX shots in the film, more than half are used in the coaster disaster alone.

In an interview with IGN, stars Mary Elizabeth Winstead and Ryan Merriman remark having some grim, macabre thoughts on account of starring in a movie where death lives around every corner. It’s something director James Wong would likely be proud of. In an interview with Movieweb, he remarks of the audience,

“I’m hoping they flip out. I hope they dig in and have a lot of fun. My fantasy is that when they go on a roller coaster, they stop for a moment and think about this film. Then they go, “Alright. I’m cool.” And then they get on. I just want them to remember the movie when they go to the amusement park.”

Existentially, Wong has succeeded. No different than log trucks, tanning beds, or the jaws of life, the minutiae of everyday life is refracted through a grisly, crimson lens. It’s impossible not to see death in coasters and fast-food drive-thrus. The coaster itself took the franchise in a considerably new direction. Parallel with the other disasters, the accident on Devil’s Flight has its roots in real-world disasters. James Hackemer of New Jersey was ejected from his coaster seat on Ride of Steel in 2011, losing both legs in the process. In 1984, a woman riding Disneyland’s Matterhorn was thrown from her car, colliding with another in an accident that would leave her decapitated.

The annals of theme park history are replete with grim tragedies and mysteries. There are Ghost trains set ablaze, cars slipping down the tracks, and entire enterprises ostensibly built upon danger for danger’s sake. Roller coasters themselves are the tentpoles. Swings and carousels are fun, sure, but there’s nothing quite like the adrenaline spike of a roller coaster. Unlike other accidents in the franchise, Devil’s Flight is innately dangerous. It’s supposed to be. Air travel and bridges, for instance, are necessary. They’re means to an end few people can avoid.

Roller coasters, conversely, are the machinations of man. Man playing God. Launching people at unheard-of speeds, twisting them in corkscrews and loops. Suspending them in the air, subjecting their bodies to G-forces they would never organically experience. With the threat built in, it’s wickedly clever for Wong and company to subvert it so cruelly. Coaster accidents are rare. Audience members are besieged with sorry as they strap in, even those who haven’t seen Final Destination 3. It’s too easy to imagine something going awry. It’s part of the thrill, no different than horror movies themselves. Fear is part of the charm.

Admittedly, an accident on the scale of Final Destination 3 is unlikely. The seat restraints, for instance, are portrayed as working with hydraulic fluid. Pressurized air would be used, enabling quick release, and there would be considerably more fail-safes in place. Mechanically, those restraints would never leave a bunch of hippie-dippie teens dangling over certain doom atop the peak of Devil’s Flight. Plot holes abound, too, especially given how Frankie Cheeks’ (Sam Easton) camcorder is instrumental in causing the accident, despite him failing to board after Wendy’s premonition.

The Final Destination franchise writ large is predicated on this kind of improbability, however. That doesn’t stop it from haunting dreams and rendering normal, everyday activities as springboards of death. Abounding in absurdity and gallows humor, the franchise grounds its accident with grisly aplomb. While other horror features such as The Lift and Butcher, Baker, Nightmare Maker incite their narratives with similarly grim accidents, nothing has achieved the same quotidian fear factor as Final Destination. In the third entry, it’s a classic roller coaster of doom.