Does the word "duh" mean anything to you? 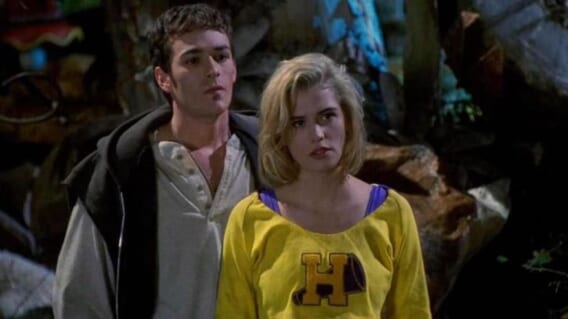 Buffy the Vampire Slayer has long lived in the shadows of its television counterpart. The series is darker, more serious, and features a great deal more character development. All of those changes served to improve upon the film. However, stacking the two against one another isn’t exactly an apples-to-apples comparison. The series had multiple seasons in which to establish and develop its characters and the film runs the length of roughly two episodes of the show.

I think that the 1992 feature film is a fun and silly ride that’s far better than it’s typically given credit for being. So, in honor of the flick’s 30-year release date anniversary, I’d like to take a moment to celebrate this underappreciated effort for everything it is, rather than what it is not. Read on for five reasons Buffy the Vampire Slayer deserves more credit.

Without the film, the beloved television series likely never would’ve come to be.

Problematic creator aside, Buffy Summers is a cultural icon that has touched millions of lives. While the man that gave her life may not be the feminist the world once believed him to be, the character stands as a capable female heroine from a time where ass-kicking women in film were not particularly commonplace. And even though the character reached icon status by way of the WB spinoff series, the show likely would never have come to be without the existence of the film.

The cinematic predecessor to the television series is certainly flawed. But it is still quite a bit of fun. And Buffy fans owe the feature a debt of gratitude for paving the way for the groundbreaking show. The film opened the door for the series and that contribution cannot be undersold.

The Flick is an Unmistakable Product of its Time

From the soundtrack to the hairstyles to the wardrobe, Buffy the Vampire Slayer is easily identifiable as belonging to a bygone era. Some might see this early-90s horror comedy as dated and I can’t really argue with that assessment. But I would counter that the flick strikes a nostalgic sweet spot and revisiting almost feels like going back in time.

The Dialogue is Exceptionally Quotable

Not every joke from the film lands. And the flick is often campy when it should be scary. But Buffy the Vampire Slayer still features some exceptionally memorable dialogue. Case in point: “All I want to do is graduate from high school, move to Europe, marry Christian Slater, and die. Now that might not sound too great to a scone-head like you, but I think it’s swell.” And that’s just one example. The film is full of ridiculous (yet often hilarious) exchanges like that.

I would be hard-pressed to name an early-90s teen picture with a more iconic cast than Buffy the Vampire Slayer. The film features appearances from up-and-coming (circa 1992) stars like Luke Perry, David Arquette, Hillary Swank, Ben Affleck, and Thomas Jane. While Kristy Swanson (who played the titular character) didn’t necessarily go on to bigger and better things, most of her costars did.

In addition to its teenage cast, the flick also features appearances by several more established names. But one, in particular, really stands out.

On the subject of the film’s more established cast members, Paul Reubens steals almost every scene in which he appears. Perhaps the most iconic aspect of his character is that much of his performance was improvised on the spot.

Amilyn’s death is so over-the-top, so ridiculous, and easily one of the most memorable moments from this oft-maligned horror comedy. But what else would you expect from the man that brought Pee-Wee Herman to life?