5 Fun And Scary Retro Gateway Movies That Ruined Your Childhood

These macabre efforts marketed to youngsters get delightfully dark. 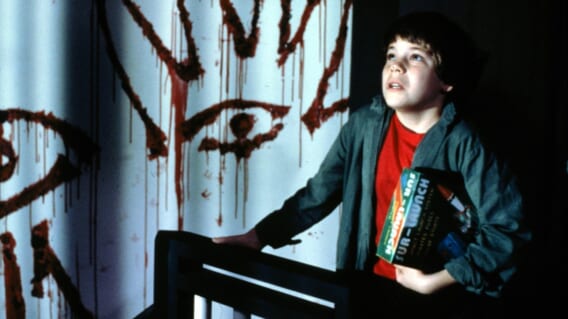 Stephen Dorff in The Gate.

My love for the horror genre started at a young age. However, my mom and dad were fully convinced that Satan would enter our home and possesses our bodies if we watched anything overtly sinister. So, I often found myself on the hunt for genre fare that I could smuggle into the house without alarming my overly cautious parents. That dynamic kept me from seeing a lot of the great horror offerings until I was a bit older. However, I still have fond memories of the gateway films that gave me a taste for terror in my formative years.

So, with that in mind, I am looking back on a series of pictures that helped spark (and or) satiate my appetite for the macabre at a young age. These five gateway features will always have a special place in my heart.

While not a horror film, Cloak & Dagger is undoubtedly chilling and does fit squarely under the genre film umbrella. The screenplay was penned by master of horror Tom Holland. His frequent collaborator Richard Franklin (Psycho II) was at the helm.

What makes Cloak & Dagger so effective is that it doesn’t pander to its audience. Lead character Davey (Henry Thomas of E.T.) finds himself in possession of an Atari cartridge with military secrets stored inside. After coming into possession of the game, he is thrown into a frightening web of deception and death. Holland’s screenplay contains some delightfully off-color exchanges. One sees an unsavory fellow threatening to turn poor Davey into shredded meat and watch him bleed to death. These days, we rarely see children put in that type of danger onscreen. But that’s what made the ‘80s such a magical time. My appreciation for Cloak & Dagger eventually led to me discovering Holland’s more straightforward horror fare. The rest, as they say, is history.

This is another prime example of a genre picture marketed to younger audiences that isn’t afraid to put its youthful leads in some seriously sinister situations. The picture imagines what might have been if Sherlock Holmes and Doctor Watson had met at boarding school, rather than later in life. Soon after meeting, the pair find themselves investigating a mystery involving an Egyptian cult and a rash of unexplained deaths.

Young Sherlock Holmes sees Holmes navigating some very adult situations, including a tragic and unforeseen loss. That turn of events fits the sometimes-bleak tone of the picture but is still a bit surprising for a feature made with impressionable viewers in mind.

The horror elements in this gateway effort come courtesy of a series of deadly hallucinations that showcase state-of-the-art (for the time) effects work. In one particularly memorable scene, we see Watson tormented by malicious pastry come to life.

Return to Oz introduced audiences to future genre film icon Fairuza Balk while capturing the darker side of the Oz books (which were watered down a bit for The Wizard of Oz).

This fantasy-adventure flick delivers a harrowing finale that sees Dorothy (who actually looks like a young girl in this incarnation) put in real peril by way of the menacing Wheelers and Princess Mombi (who is fond of removing and replacing her head based on her mood).

This eerie film served as a source of inspiration to Tim Burton, who would later draw from this macabre adaptation when conceiving The Nightmare Before Christmas (specifically the Jack character).

I remember catching The Gate one Saturday morning during the time when cartoons would normally dominate the airwaves. I was mesmerized by the decidedly dark storyline that sees young Glen (Stephen Dorff) and his best friend Terry (Louis Tripp) unwittingly unleashing a demonic entity from a hole in Glen’s backyard.

Unlike some of the other offerings on this list, The Gate veers into proper horror territory. But it was made for and marketed to a younger audience. So, the sinister goings-on came as a pleasant surprise during my inaugural viewing. I remember watching in shock as Glenn’s parents seemingly return home, only to reveal themselves as some sort of illusion, dissolving into a gooey mess.

Certain elements of The Gate may not hold up quite as well to return visits as an adult. But generally speaking, I still find this picture to be a spooky good time and am grateful to have caught it as an impressionable youngster.

The interesting thing about Gremlins is that it doesn’t necessarily start out as a proper horror film. But it certainly goes there in the third act. Director Joe Dante really takes his time getting to the spooky stuff. So, when the titular characters begin their reign of terror on an idyllic community, it has the potential to really catch the audience off guard.

In spite of its family-friendly PG-rating, this flick serves up plenty of macabre moments. The Gremlin in the blender scene is absolutely horrifying. And while amusing, Mrs. Deagle’s chairlift sendoff is pretty dark.

I am grateful to have grown up at a time when mainstream cinema wasn’t afraid to frighten children a bit. And were it not for films like Gremlins (and the other titles on this list), I may never have come to realize how much fun it is to be scared.