‘Young Sherlock Holmes’ is the Forgotten, Borderline-Horror Film You Didn’t Know You Needed

Barry Levinson’s fantasy-adventure film is just waiting to be rediscovered! 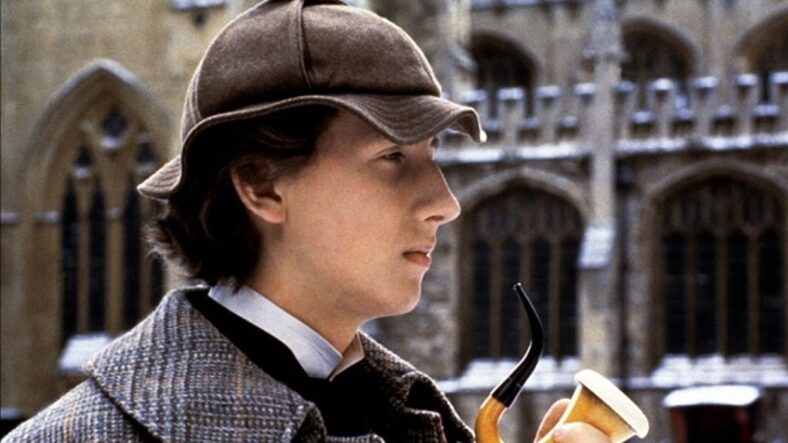 One might not expect an Oscar-nominated film (Best Visual Effects) from the director of Rain Man (Barry Levinson) to be all but forgotten in the years since its release. Yet, that’s precisely what has happened with Young Sherlock Holmes. This filmic effort (which counts Steven Spielberg as an executive producer) faded into relative obscurity in the decades since its release. But allow me to assure you the lack of remembrance has nothing to do with the film’s quality or significance.

At first glance, Young Sherlock Holmes may look as though it could be a run-of-the-mill attempt to cash in on a well-known intellectual property. Not to mention, it also shares certain thematic similarities with the better-known film Indiana Jones and the Temple of Doom. But the flick is much more than a cash grab or a cheap imitation. In fact, it’s suspenseful, full of inventive effects sequences, and comes dangerously close to being a horror picture at times. Accordingly, this fantasy-adventure film is just waiting to be rediscovered.

Young Sherlock Holmes imagines what might have been if Holmes and Dr. Watson had met in their formative years. The duo crosses paths at boarding school and they run afoul of an Egyptian cult which is fond of human sacrifice and various other forms of unsavory behavior.

Also Read: ‘Return to Oz’ is the Perfect Gateway to Horror

As the literary characters set out to solve their first case together, we see them encounter all manner of horrific sights, many of which feel as though they could have been plucked from a horror movie. The audience is treated to appearances by malevolent pastry, a killer stained-glass window, roast fowl come to life, and so much more.

I discovered this film in my youth, shortly after the initial release, and it served to assist in kickstarting my love of the horror genre. The danger, intrigue, and sinister storyline satiated my appetite for the macabre. On that note, I think of Young Sherlock Holmes functions as something of a gateway to genre film. Along with contemporaries like Return to Oz and Cloak & Dagger, this flick dares to put children in real peril and pushes boundaries for a film targeting younger viewers. As such, Young Sherlock Holmes is likely to give impressionable audience members a bit of a start. But the scares are tame enough that children of appropriate age aren’t likely to be traumatized.

While Young Sherlock Holmes is sure to appeal to younger viewers, it also holds up well to repeat visits in adulthood. One element that has helped the flick stand the test of time is great casting choices. Nicholas Rowe is the spitting image of the titular character and believably embodies the role, confidently carrying the film on his shoulders. Alan Cox is also effective as a young Watson. His character undergoes, by far, the most growth throughout the picture. And his arc is an enjoyable one. Watson starts as whiny and entitled but ultimately emerges as a worthy and effective sidekick by the end of the film.

Also working in the picture’s favor are the state-of-the-art (for the time) effects. The picture delivers a series of great FX sequences, most notably bringing a series of inanimate objects to life in unexpected and frightening ways. The flick makes use of CGI, practical effects, stop-motion style animation, and several other tactics to deliver effects that were well ahead of their time. This is one of the earlier examples I can recall of CGI in a motion picture. But it holds up surprisingly well. Sure, it’s dated after all this time. But it was pretty revolutionary for 1985.

In addition to a great cast and spectacular visuals, the film also makes use of some incredible set pieces. I don’t want to give too much away, so, I will simply say that the pyramid set is epic, as are the various fixtures contained within.

If you are keen to check Young Sherlock Holmes out, it is streaming on Pluto and Paramount +, as of the publication of this post. And if you’re already a fan of the film, be sure to let us know on Facebook, Twitter, or Instagram.