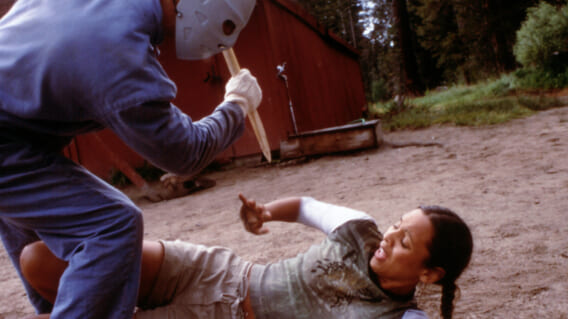 Horror audiences know well enough the sheer dearth of slasher movies that were released in the early aughts. Even that timeline is generous in a sense. Until the recent slasher boon—looking at you, X and Freaky—it was practically a century as far removed from its slasher roots as any before. Sure, there were indie gems and some stellar throwbacks. But the slashers of the 21st century were homage, callbacks to a time where nurses and garbage men and dolls were slicing and dicing every person they came across.

The subgenre is currently in resurgence, no doubt spurred by an infinite number of legacy sequels revitalizing long-dead properties. Resultantly, it feels like the perfect time to harken back to the early 2000s when slashers were on their last, severed leg. Here, we’ll be rounding up ten 2000s slashers audiences might have forgotten about. These run from international outings to big-budget tentpoles, though in one way or another, they’re all worth the blood they spill.

Kevin Bacon is made invisible and menaces Elisabeth Shue in Paul Verhoeven’s special effects masterwork. There was a period of time in the late nineties and early 2000s where horror films were at the forefront of groundbreaking effects and big-budget concepts. Hollow Man is among the best of them. At first a cautionary science fiction yarn, Hollow Man goes full Halloween in its final act, with an invisible Bacon slicing every poor scientist he comes across. It isn’t anything beyond what the title suggests. But sometimes it’s nice to see a slasher movie refracted through a $100 million lens.

Some of Identity’s charm is lost once its twist is revealed. But, in 2022, newer audiences are less likely to be aware of just how subversive and twisted its big reveal is. Upon release in 2002, everyone knew what Identity had in store. Though for contemporary audiences, that big reveal will likely prove surprising. An Agatha Christie adaptation set at a seedy motel, Identity tracks several known faces as they fall victim to an unknown killer one by one. It’s a solid slasher mystery anchored by a fantastic setting, lots of rain, and a bevy of strong performances.

Identity is currently streaming on Netflix.

Stefan Ruzowitzky’s Anatomy is arguably one of the early 2000s’ most underrated slasher movies. Starring equally underrated actor Franka Potente, Anatomy is a teeny-bopper slasher set at a German medical school. Students start dying, and Potente’s Paula Henning is led to believe a secret society is responsible for the slayings. Gorgeously directed, incredibly tense, and distinct in locale, Anatomy, and even its ludicrous though no less fun sequel, is worth a look.

Cry_Wolf has an interesting origin story. Director Jeff Wadlow won a contest and $1 million. She, he set about making his feature slasher debut. Love or hate Cry_Wolf, Wadlow remains active, most recently directing 2020’s Fantasy Island horror reboot for Blumhouse. A bunch of hotties at an elite boarding school play a game, the titular Cry Wolf. A riff on Mafia, they expand their game to the entire school. They create unfounded rumors a serial killer is targeting coeds. Then, the rumor spreads. But someone has taken it a bit too seriously, now targeting the students responsible for its dissemination. Expectedly, there’s a third-act twist that either makes or ruins the movie. But there’s no doubt Cry_Wolf is a stellar, better-than-average slasher with a compelling aura of mystery.

David Moreau and Xavier Palud’s Them, titled Ils in French, is one of the scariest French horror movies ever made. At a lean 74 minutes, Them wastes no time setting up complicated backstories or weighing its narrative down in stylistic excess. An austere slasher progenitor to the likes of The Strangers, a young couple is targeted by unknown home intruders one evening and must try to escape with their lives. There’s nothing more or less to the proceedings—other than the intruder reveals, a dour, nihilistic twist—resultantly, Them feels all too real.

Them is currently streaming on Shudder.

This isn’t Mike Flanagan’s Hush (though that one is also very, very good), but rather Mark Tonderai’s Hush, a deliciously tense game of highway cat-and-mouse. Zakes (William Ash) and his girlfriend Beth (Christine Bottomley) are driving late one night. While Beth is asleep, the tailgate on a truck ahead of them momentarily rises, revealing a naked girl, chained up, begging for her life. While occasionally bogged down by Beth’s poor attitude, Zakes finds himself in a fight for his life as he endeavors to track the truck driver down and save the young woman. A grim British slasher, Hush is criminally underappreciated, dumped onto VOD at the tail end of the decade.

Venom is arguably the most well-known on this list, even if its 2005 release was marred in controversy. Released just days after Hurricane Katrina, Venom’s Louisiana-set slashing was markedly poor timing. This meant it was all but relegated to early aughts slasher obscurity. It’s a shame since, despite not breaking any new ground, Venom is a competently made, dare I say pretty fun, early 2000s slasher outing. Jim Gillespie of I Know What You Did Last Summer fame returns to the slasher landscape for this tale of a possessed zombie slaughtering hapless teens. With decent acting, some stellar photography, and gnarly kills, Venom is constrained by an unfortunate release, though otherwise remains a top-notch teen slasher.

Laid to Rest was a pretty big deal when released. Robert Green Hall’s slasher throwback had some name talent attached alongside heaps and heaps of practical gore. Granted, Laid to Rest arguably only exists to be violent—and trust me, it is. But beneath the layers of viscera and severed limbs, there’s a pretty effective slasher movie. ChromeSkull, a killer wearing, well, a chrome skull mask, stalks an amnesiac woman, slaughtering everyone who gets in his way. There’s little beyond that, though the sequel, ChromeSkull: Laid to Rest 2 does expand the killer’s scope and mythos. Yet Laid to Rest remains inimitably violent and engaging. While it’s guaranteed to alienate more casual genre fans, it’s an early aughts gem some burgeoning horror stans might reasonably have missed out on.

Laid to Rest is currently available to stream on Tubi.

Ignore the ridiculous title and revel in the absurd slasher carnage. Alternatively titled Slaughter Night, SL8N8 is a 2006 Dutch slasher in the vein of My Bloody Valentine. After 18-year-old Kristel’s (Victoria Koblenko) father dies, she continues his work investigating serial killers, especially Andries Martins, a mine shaft killer. Kristel and her friends travel to an abandoned mine, and after a collapse, find themselves trapped underground with the spirit of Martins. It’s more of the same, sure. But the setting elevates the proceedings, and directors Edwin Visser and Frank van Geloven are mindful enough to include plenty of ooey-gooey carnage.

Listen, I love both Bloody Murder and Bloody Murder 2, and I have no shame about that. In the early days of video rental stores, before accessible internet access, my weekend, childhood rentals were predicated on covers and titles more than anything else. It’s why I saw the likes of Razortooth, a 2009 creature feature about a man-eating eel, and Kane Hodder pic Dead Noon. Bloody Murder and Bloody Murder 2 were among my favorite, clear Friday the 13th riffs with low budgets and excess gore. While Bloody Murder rocks, Bloody Murder 2: Closing Camp really seals the deal. Camp counselors are menaced by a masked, knife-wielding maniac at Camp Placid Pines. While it’s almost akin to a remake of the first– righting many of the criticisms leveled against it, it’s a delightfully shoddy direct-to-video early aughts slasher. Give me all the Bloody Murder, please.

Those are just ten among dozens of sensational, bloody good 2000s slashers. Are there any I missed? Which ones do you think should have been included here? Let us know over on Twitter. Stay spooky, stay slashing.