This gritty redux is eerie and unpredictable 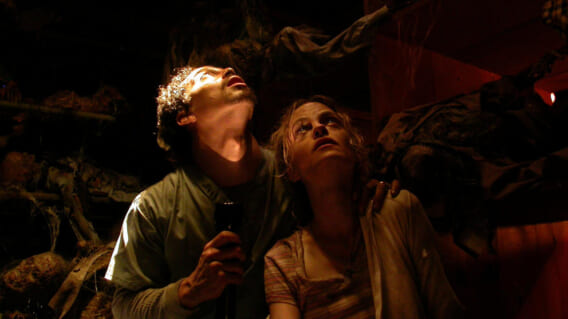 Watch the latest episode of the Overlook Motel:

This week, I am looking back on a tragically under-seen offering from the late, great Tobe Hooper. Toolbox Murders has the rare distinction of existing as a remake that dramatically improves upon the original. In this case, that isn’t terribly hard to do. The 1978 film, The Toolbox Murders is a mess. It’s tonally imbalanced and painfully paced. What starts as a slasher-esque exploitation flick devolves into a Lifetime movie of the week during the second act and it never recovers. Thankfully, this update shares very little in common with the film’s reimagining. Hooper’s 2004 Toolbox Murders stands as a brutal effort that deftly melds slasher tropes and supernatural horror.

The film sees Nell (Angela Bettis) and her husband Steven (Brent Roam) move into a historic apartment building in Hollywood. In the ‘plus column’, the rent is reasonable and the complex has a doorman. In the ‘minus column’, the building is dilapidated and the fellow residents have a strange habit of turning up dead.

When Steven and Nell move into their building, they encounter their new neighbors, most of whom are more than a little unusual. That serves to heighten the sense of isolation they feel, particularly Nell. Steven is a resident at a nearby hospital and doesn’t spend much time on the premises. But Nell is an unemployed teacher and lives nearly every waking moment in her new home. The notion that she is without an ally makes Nell appear even more vulnerable to the evils that surround her new dwelling.

The late Tobe Hooper does a commendable job building atmosphere with this underappreciated effort. His camerawork creates a sense of unease and the film’s gritty tone and the grimy color palette serve to compound that sensation. This film has an overall feel to it that recalls the bleak tone of the original and it maintains a similar level of graphic violence. But that is where the similarities stop.

With this reimagining, Hooper manages to subvert expectations early and often. At the onset, he introduces something of a decoy protagonist, only to shift gears and reveal the identity of the actual protagonist shortly thereafter. Also noteworthy is the way the flick seems to set itself up as a straightforward slasher. But as the narrative unfolds, we begin to see that there is more than just a run-of-the-mill maniac with a toolbox at work here.

While the string of murders depicted in the film is executed in the slasher style, the narrative weaves in elements of supernatural horror. And that’s something we don’t see a lot of, which is unfortunate, because the genre melding proves quite effective.

Aside from claustrophobic camerawork, eerie atmosphere, and the gritty tone, much of what works about Toolbox Murders can be attributed to the picture’s screenwriting team, Jace Anderson and Adam Gierasch. The duo also penned the script for Hooper’s 2005 film Mortuary. Anderson and Gierasch have had their fair share of misses, Mother of Tears for instance. But they really found their stride with Toolbox Murders. The narrative is imaginative and often unpredictable. And the third act takes the audience on a surreal and unexpected trip that feels ever so slightly reminiscent of the thematic elements explored in the third act of Dario Argento’s Inferno. However, I will leave it there for anyone that has yet to experience either film.

Toolbox Murders is a bit rough around the edges at times. It was certainly made inexpensively. But if you can get past that, the flick delivers epic kill scenes and a twisty narrative that’s likely to keep you guessing.

Ultimately, Toolbox Murders is a solid effort that should be celebrated along with Hooper’s better-known cinematic offerings.

If you’re keen to chat more about under-seen films, feel free to reach out to me on Twitter @FunWithHorror.