Bruce Campbell is pitch-perfect in this loving sendup of both his career and fan culture. 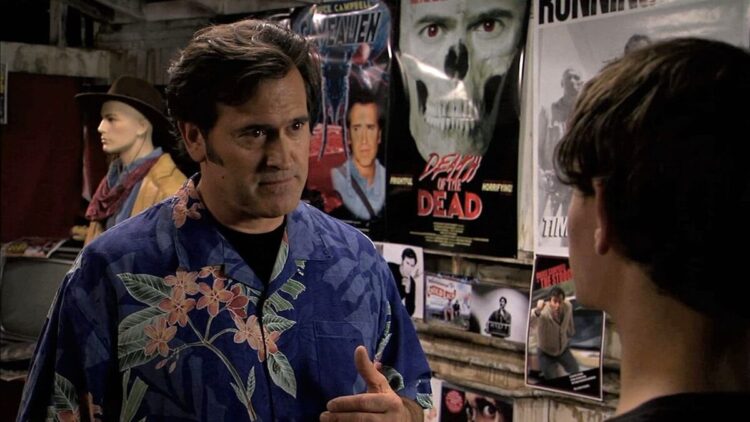 This week, I am looking back on My Name is Bruce. This flick is one of genre icon Bruce Campbell’s most underrated efforts. The beloved character actor directed and starred in the film. And he serves up a winning performance filled with witty one-liners. The picture simultaneously pokes fun at and celebrates the actor’s storied career.

My Name is Bruce sees a group of high school students in the town of Golden Lick, Oregon accidentally unleashing an ancient demon. The spirit claims the lives of all but one of the students. The lone survivor Jeff (Taylor Sharpe) kidnaps Bruce Campbell, hoping the celebrated thespian will rid the town of the malevolent presence by which it is plagued.

My Name is Bruce may appeal to a limited audience. But it is certainly a gift to that audience. It is tongue-in-cheek in all the right ways and it serves to prove that Bruce Campbell isn’t afraid to laugh at himself. This feature serves as a (very) self-referential sendup of the iconic actor’s storied filmography. It also pokes some good-natured fun at the characters Campbell is well-known for playing.

Related Post: 5 Meta Horror Films That Deserve Their Moment in the Spotlight

The fact that Bruce Campbell doesn’t mind being depicted as the type of buffoon he has often depicted onscreen says a lot about his nature. This fictionalized version of the actor is not painted in the most flattering of lights. But Campbell goes all-in and embraces this comical version of himself. And he turns in a winning performance in the process. His cocky attitude and priceless one-liners are sure to delight even more casual fans of the actor.

In addition to satirizing the roles Campbell is known for playing, the film also serves as something of a lighthearted, yet astute, commentary on fan culture. That aspect is never more apparent than in the inciting event that sets the film in motion. Jeff kidnaps Campbell because he doesn’t quite grasp the separation between art and life. Jeff is a superfan that carries things too far and that is a very real phenomenon we’ve seen more and more in the age of social media. While the picture largely makes light of the toxic side of fandom, it, nonetheless, raises some valid points about the darker side of celebrity worship.

Commentary aside, the flick is also noteworthy for featuring a handful of fantastic cameos, perhaps the most impressive being the ever-versatile Ted Raimi in a triple role. Additionally, Ellen Sandweiss, appears as Campbell’s ex. Her name, of course, is Cheryl. A not-so-subtle nod to her role in Evil Dead. Tim Quill and Dan Hicks also appear as a gay couple that owns a gun shop. Each has appeared in the Evil Dead trilogy. The film again tips its hat to their past roles with a wink and a nod.

Also Read: ‘The Aggression Scale’ Is A More Brutal and Disturbing Version of ‘Home Alone’ [The Overlook Motel]

The memorable cameo appearances are far from the only horror reference or in-jokes, though. The flick is full of them. My Name is Bruce is absolutely a feature that takes pride in being made by horror fans for horror fans.

As for why this picture remains fairly underrated, outside of its relatively small, yet loyal cult fanbase, I am not entirely sure. My Name is Bruce is funny, amusing, and full of (intentional) camp appeal. So, if you haven’t seen this comedic blend of horror and self-deprecating, meta satire, give it a look.

The flick is currently out-of-print as of the publication of this post. But, fear not, it is not yet commanding outrageous sums on the secondary market. In fact, there are currently multiple copies listed on eBay for less than $20.

If you’d like to chat more about underrated cinema, feel free to hit me up on Twitter @FunWithHorror.

Tags: My Name is Bruce The Overlook Motel