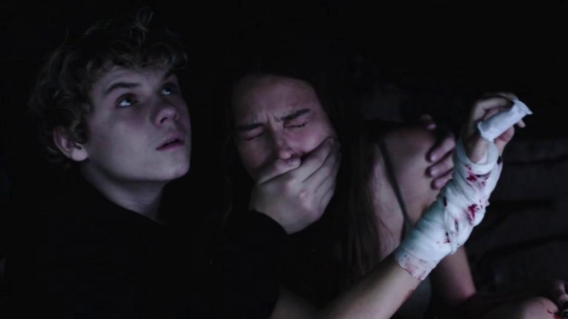 This week, I am pleased to be singing the praises of Steven C. Miller’s 2012 film The Aggression Scale. This is my second time spotlighting Miller’s work on The Overlook Motel and it likely will not be the last. Miller is an underrated director that has nothing but love for the horror genre. His work frequently pays tribute to the nostalgic faves of years past. And The Aggression Scale is a great example of him doing just that.

With a tip of the hat to Home Alone, The Aggression Scale sees a group of ruffians descending upon a family in the process of settling into their new domicile. The hooligans are on the hunt for a fortune in stolen mob money. But what the thugs are not prepared for is Owen. Owen is a troubled teen with a predisposition for violence and a unique set of skills that come in quite handy when he is called upon to protect his family and his home.

After introducing the key players and setting up the proceedings, The Aggression Scale kicks into high gear. And once the action starts, it doesn’t stop. The pace is breakneck and the tension palpable. There are a number of impressive fight sequences, some creative traps and obstacles, and multiple harrowing chase scenes likely to keep you on the edge of your seat.

In addition to packing in plenty of action, The Aggression Scale also features a fairly impressive cast of genre film stars including Ray Wise (Reaper), Fabianne Therese (Southbound), Derek Mears (Friday the 13th, 2009), and Dana Ashby (Twin Peaks). But the real star of the show is Ryan Hartwig as Owen. Owen is non-speaking throughout the film. We are given reason to believe that his lack of dialogue pertains to a series of mental health struggles. But it is those same struggles that account (in part) for Owen’s ability to think and act tactically in the face of grave danger.

Despite the character not being able (or willing) to communicate verbally, Hartwig conveys everything we need to know about the character via body language and non-verbal communication. And while Owen may not appear to be a likable protagonist on paper, Hartwig is able to show Owen’s humanity in a way that makes him relatable. That’s no small feat for a relative newcomer in his first starring role in a feature.

To be fair, The Aggression Scale isn’t without its faults. The acting can be a bit rough at times. Some of the logic is a stretch. And above all else, one must be willing to suspend disbelief to really get into the narrative. But damn is it ever fun. The flick merges elements from Home Alone with the more adult tropes common to the home invasion genre, replacing the cartoonish violence of Home Alone with more visceral fare. And the end result is a balls-to-the-wall good time. As of the publication of this post, you can check the flick out on Vudu and The Roku Channel (for free with ads).

If you’d like to chat more about this violent, yet whimsical horror-infused thriller, feel free to hit me up on Twitter @FunWithHorror!