'We Need to Talk About Kevin‘ turns 10 this year and remains one of cinema’s scariest explorations of what makes monster. 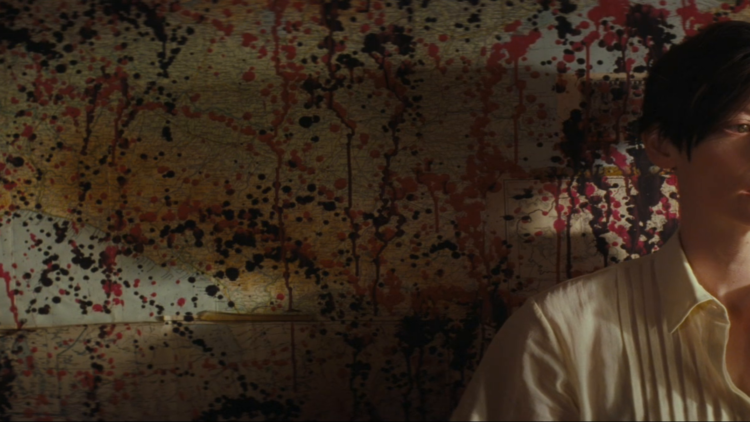 We need to talk about We Need to Talk About Kevin. Society has consistently and reliably blamed parents for the actions of their children. Pseudo-scientific theories such as 18th-century imaginationism held that children born with severe physiological defects were the way they were on account of their mothers’ perverse thoughts. 21st-century ideas of parental influence–dominion over every child’s whim and action– are less, uh, ridiculous, though no less troubling. In the contemporary age, it’s said that tractable children, whether by means of neglect or negligible supervision, are molded into monsters by their parents.

Lynne Ramsay’s We Need to Talk About Kevin turns ten this year and remains one of the scariest, bleakest explorations of motherhood. It interrogates maternal influence, adroitly and dourly exploring the quasi-parasitic relationship between a mother and her monstrous, homicidal son. We Need to Talk About Kevin is terrifying, thoroughly disturbing, and ten years later, unmatched in its austere psychological honesty.

Tilda Swinton stars as Eva Khatchadourian. Once a successful travel writer, the audience is introduced to Eva in a decrepit house, visiting her son, Kevin (Ezra Miller) at the local prison in-between shifts at the most cheerless travel agency (yes, those still exist) ever seen. Her neighbors are hostile, smashing her eggs at the grocery store and vandalizing her house, though for much of We Need to Talk About Kevin, it remains deliberately unclear why. Kevin is in prison and Eva’s husband (John C. Reilly) and daughter (Ashley Gerasimovich), seen in flashbacks, are conspicuously absent in the present, but the reason behind it all is tantalizingly, terrifyingly cryptic.

“Mothers don’t hate their sons!” shouted a vitriolic and visibly enraged Mary Tyler Moore as Beth Jarrett in Robert Redford’s Ordinary People. It’s an encapsulation of repressed bourgeois angst, the result of fearfully awaiting the corrosion of a delicately manicured and manufactured life. That line is chillingly emblematic of Eva Khatchadourian. As a child, Kevin (Jasper Newell in flashbacks) is unconscionably antagonistic. Eva hates him.

He cries only with her, resists conventional child-rearing, and rebuffs Eva’s many attempts at being close to him. He’s a pocket-sized gaslighter, tormenting Eva in a way that he never shows to anyone else. He interferes with her work. At one point, he trashes her office, the result of which is Eva throwing him against a wall, breaking his arm. Kevin, the pint-sized monster, lies to his father, saying he fell, adroitly aware of the leverage that gives him over Eva, even at such a young age.

Kevin’s manipulation and torment grow, especially after the birth of Celia, Eva and Franklin’s second child. At one point, Kevin uses drain cleaner and orchestrated negligence to blind Celia. Eva blames Kevin, though Franklin blames Eva. He presumes she’s simply out to get their son.

His sadism swells, and soon enough, the entire picture comes together. Kevin orders bike locks online, locks several students in his school’s gymnasium and uses a bow and arrow set Franklin had purchased for him to murder several students. Eva, in their last meeting, asks Kevin why he did it, to which he simply replies that he doesn’t know.

Well-received upon release– Swinton herself nabbed a Golden Globe and BAFTA nom for her pitch-perfect performance– We Need to Talk About Kevin has shifted into something akin to obscurity. Based on Lionel Shriver’s 2003 novel of the same name, it defies conventional genre classification. As such, it remains criminally overlooked. In all fairness, the subject matter is grim, the entire enterprise bleak, and it’s not exactly movie night material.

It is well-documented that the relationship between a mother and child is bidirectional, with mutual cognitions during any given parent-child exchange having an impact on the socialization of the child and the disposition of the mother toward her child. Eva and Kevin are antagonistic from birth, a similar thread explored in Ari Aster’s Hereditary. It’s hard to understand why, exactly, Kevin is Kevin. In a sense, that’s the point.

Fleeting feelings of both love and hatred during the core developmental years abound. But in the end, the monster is simply a monster. Kevin simply wanted to kill his classmates and he doesn’t even know why. Long before children should, Kevin is frighteningly aware of the symmetrical relationship he had with his mother and those closest to him. He knows how to deceive and manipulate, how to draw out his mother’s worst impulses, degrading her own sanity while augmenting his own innate malice

It all amounts to a lack of empathy. A lack of empathy is often a hallmark of sociopaths or psychopaths, though it is particularly difficult to identify in children and young adults. It took years for Eva to really notice it. It wasn’t until it started manifesting itself in antisocial behavior and emotional disequilibrium that Eva really noticed something was off. It’s a common horror movie theme. Killers and monsters and ghouls have no empathy. Like Michael Myers or the many Ghostface killers, motives– despite what these killers say or imply– amount to a lack of empathy for other people.

Ramsay similarly explores this in the community writ large. Eva isn’t responsible for what Kevin did– and she herself is bearing profound grief– though the community treats her as if she is. There is, as noted, no empathy. In Shriver’s original novel, her preeminent focus is on whether Eva’s ambivalence toward motherhood and lack of empathy influenced Kevin’s development. It remains unclear, and it’s all the more terrifying because of it.

There are few horror movie monsters scarier than Kevin Khatchadourian because Kevin Khatchadourian is real. Horror movies don’t need to be reassuring or hopeful, and We Need to Talk About Kevin is the farthest thing from comfortable. It’s an honest interrogation of real-life monsters and the overarching truth that sometimes, much as people might wish otherwise, there isn’t a clear explanation for why.

Tags: Lynne Ramsay We Need to Talk About Kevin