The ‘Clovehitch Killer’ Will Make Your Skin Crawl [The Overlook Motel]

Duncan Skiles’ BTK-inspired horror is eerie and uncomfortable to watch. 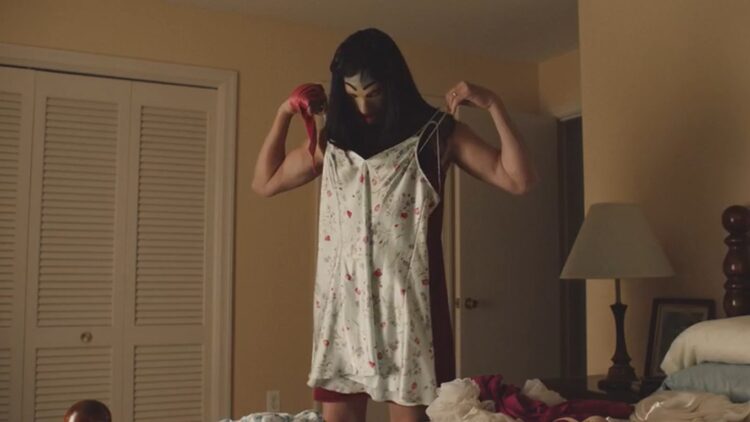 In this edition of The Overlook Motel, we will be looking back on Duncan Skiles’ tense, unnerving, psychological horror thriller, The Clovehitch Killer.

Tyler Burnside (Charlie Plummer) seems to have a pretty average life. He is involved with scouting and active in his church. But a series of jarring discoveries lead him to believe that his father Don (Dylan McDermott) may be the long-dormant Clovehitch Killer. The closer to the truth Tyler gets, the more danger he finds himself in. Unwilling to stop until he uncovers the truth, Tyler puts his life on the line to prove that his father is a dangerous madman.

The Clovehitch Killer unfolds through the eyes of Don’s son Tyler, which is a refreshing change of pace from a lot of similar offerings. So often, we see stories told from the perspective of the killer, where they are painted as the antihero.

In cases like Dexter, that works quite well (save for the painful final season of the series’ inaugural run). But a violent man that brutalizes innocent women because it turns him on may not be the kind of character that should be humanized. I think that approach can easily come across as a slap in the face to victims and their families.

Related Post: ‘All The Boys Love Mandy Lane’ is Smart and Brutal [The Overlook Motel]

The film takes a lot of its cues from the horrifying, real-life crimes of Dennis Rader, the BTK Killer. Like BTK, Don is a family man with deep ties to his community; he’s the last person anyone would suspect of wrongdoing. For the role, McDermott downplays his good looks and takes on the persona of a disheveled dad. It’s strange to think a goatee, a little extra padding, and a pair of glasses can drastically change his physicality. But he looks more like a dad from the carpool line than a leading man.

Beyond his physical appearance, McDermott also nails the mannerisms of a shy and inward man with more than a few secrets he’d like to keep under wraps. His manner of speech, posture, and body language, combined with the tweaks to his physical appearance make the actor almost unrecognizable. This film shows that he is more than capable of sinking his teeth into darker roles than those for which he is typically known.

McDermott plays the part with a sinister duality that makes my skin crawl. He is as comfortable at the kitchen table with his family as he is torturing and murdering innocent victims. That realization makes the character even more terrifying.

He isn’t the type of person that would make you want to cross the street if you encountered him late at night. He’s the kind of fellow you might even feel comfortable asking for a jump start if you had a dead battery. And, to me, that is infinitely more terrifying than the kind of monster you can immediately identify as dangerous and unsavory. His ability to blend in (much like BTK) makes him an entirely different type of frightening.

While not as well-known as McDermott, Plummer also turns in a standout performance as Tyler. He gives the viewer a textured look at the horror of living with the knowledge that someone you know and love is a monster. That’s an unimaginable situation but Plummer sells it believably. And he brings a much-needed depth to the performance, seeing as how much of the picture rests on his shoulders.

The film leans into the inherent tension one would expect to feel, living under the same roof as a killer. And that makes the flick more than a little uncomfortable to watch at times.

Director Duncan Skiles slowly ratchets up the tension as Tyler goes from suspecting his father to finding incontrovertible proof of his misdeeds. Through the use of a (partially) nonlinear timeline, Skiles keeps the audience in a state of uncertainty as to the details of a very intense third act. Suffice to say, the denouement pays off in spades. The final outcome is perfectly fitting to the story by which it was preceded.

I can’t say why The Clovehitch Killer hasn’t found a wider audience. It was met with favorable reactions from critics and has a fairly bankable star in McDermott. Whatever the reason, this flick is well worth a look.

The Clovehitch Killer is suspenseful, frightening, and unnerving. You can find the flick on Netflix, as of the publication of this post. If you opt to check it out, please let us know your thoughts via Facebook, Twitter, or Instagram.