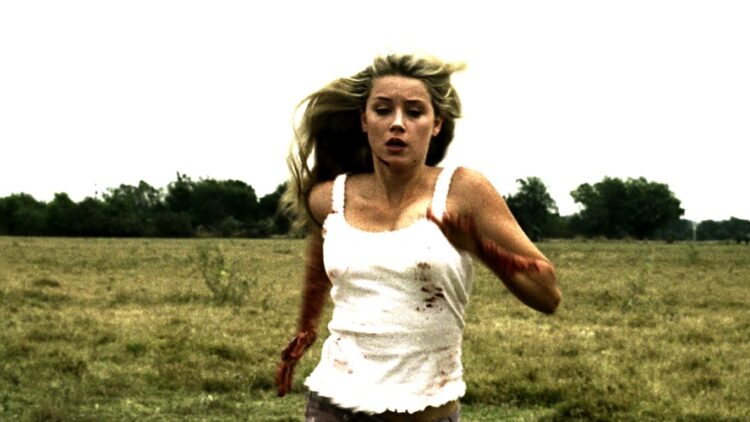 In this installment of The Overlook Motel, we will be taking a look back at Jonathan Levine’s 2006 film, All the Boys Love Mandy Lane.

All the Boys Love Mandy Lane is almost unmatched in the duration of time it took to secure a proper stateside release strategy. The Poughkeepsie Tapes is one of the only other high-quality films to come to mind that took as long to make its bow with a proper US release. In fact, All the Boys Love Mandy Lane took so long to go before American audiences (outside of an extensive festival run) that I eventually picked up an all-regions international Blu-ray. And I’m glad I did because it wasn’t until 2013 that the film was unleashed in the US.

Fortunately, All the Boys Love Mandy Lane is now accessible for rental or purchase via VOD. While it did eventually enjoy a physical media release a few years back, it is now, sadly, out of print on DVD in the states. Sigh.

The flick sees a group of high school friends head to a ranch house for a bit of depravity, a little underage consumption, and plenty of premarital sex. Amongst the crew is Mandy Lane, the envy of many of the ladies at school and the object of affection for many of the gentlemen. Amidst bouts of debauchery, the friends realize that someone is after them. And whoever it is starts picking off the young adults, one by one. Will any of the friends make it out alive or will they all become teenage casualties?

Mandy is a fascinating lead. She comes across as shy but confident in a quiet way. Mandy understands that she’s appealing to the men in her life but seems like she doesn’t really care. Mandy appears to have bigger aspirations and perhaps recognizes that there’s more to life than high school romance. She’s an interesting and dynamic character, something that becomes abundantly clear as the audience gets to know her a little more and finds out what makes her tick. She breaks from the typical final femme stereotypes and defies expectations in a number of ways. Mandy Lane is many things but boring is not one of them.

With Mandy, screenwriter Jacob Forman crafted a dynamic and textured character. Mandy is smartly written and rarely does what the audience is expecting. Amber Heard (who was relatively unknown at the time of the film’s production) also deserves praise for bringing a dynamic character to life in a believable and often relatable manner.

Mandy is more complex than your average slasher movie character. To fully understand what drives her, you may need to give the film a second look. I definitely had a different takeaway after a repeat visit than I did with my inaugural viewing.

The third act is filled with carnage and sheds light on precisely who is responsible for the bloodshed. And the answer is more interesting than one might expect from an all-but-forgotten slasher lensed in the mid-aughts. I will leave it there, so as not to spoil anything. But suffice to say the denouement does not disappoint.

As for why All the Boys Love Mandy Lane still hasn’t really found its audience, I think The Washington Post’s Michael Sullivan may have said it best when he called the flick “too dumb for the arthouse, but too smart for the mall multiplex.” That’s likely why this picture remains tragically under-seen. It doesn’t easily fit into one box or the other. But please take my word for it when I say that this film is smart, entertaining, and subverts expectations.

If All the Boys Love Mandy Lane sounds like a film you’re keen to seek out, you can find it available for rent or purchase on Amazon Prime. If you opt to check it out, please let us know your thoughts via Facebook, Twitter, or Instagram.