‘Rust Creek’ is Tense and Unpredictable [The Overlook Motel]

Jen McGowan’s horror-thriller will keep you on the edge of your seat! 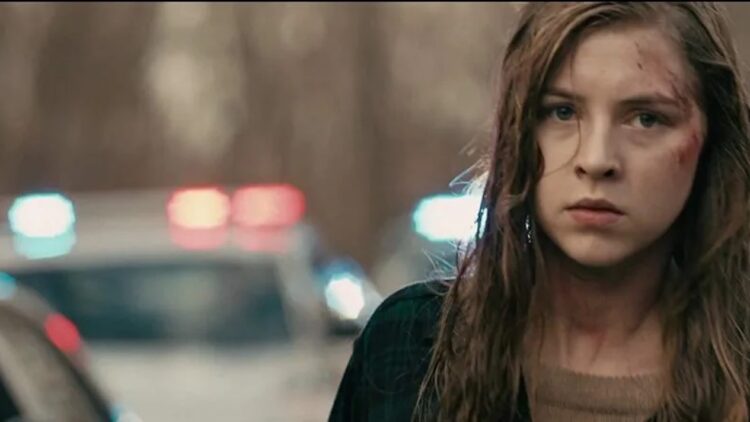 For this installment of The Overlook Motel, we will be looking back on Jen McGowan’s Rust Creek. This flick is tense and entertaining with a plucky protagonist and a series of exciting twists and turns. In fact, Rust Creek delivers palpable tension from start to finish. This is a fast-paced horror-thriller that barely gives the audience a chance to catch their breath between harrowing encounters.  Read on for a bit about what makes the film noteworthy and an important warning about the evils of river water.

College student Sawyer (Hermione Corfield) is making a long-distance drive for a job interview. When she winds up lost, of course, she pulls over to get her bearings and plot her route. A couple of locals stop off to offer assistance. But their intentions quickly prove to be sinister and Sawyer finds herself in serious danger with nowhere to turn.

Sawyer is a great character and never comes off as a damsel in distress, more so than an adept protagonist in unthinkable peril. She is capable, resourceful, and doesn’t succumb to those that wish her harm without putting up an epic fight. She maintains determined in the face of adversity and never gives up easily. Sawyer makes smart, calculated decisions and Corfield’s performance kept me invested in her plight for the long haul.

With that said, Sawyer is far from the only interesting character in Rust Creek. Sheriff O’Doyle (Sean O’Bryan) is a smartly scripted supporting player with an amusing arc. He becomes more and more interesting as we gradually learn additional details about what drives him. O’Doyle’s constant need to assert that he is the smartest and most powerful person in the room is grating but also effective in helping the audience get inside the mind of the character.

Also worthy of note is Jay Paulson as Doyle. Doyle is a complex character who is dynamic, layered, and unpredictable. Although he doesn’t vocalize a lot of what he is feeling, his mannerisms and facial expressions tell us a great deal more than words. Additionally, the onscreen dynamic between Doyle and Sawyer is captivating and their exchanges come across as authentic and heartfelt, in spite of the strange nature of their relationship to one another.

Characters aside, the storyline is unpredictable and filled with twists. As soon as I thought I’d figured out where the narrative was going, I quickly found my expectations subverted. There is a multitude of surprises along the ride to the denouement. And the line between good and evil is often blurred, making it more difficult for the audience to put a label on some of the key players. Adding to that sense of ambiguity, some of the characters’ true intentions are left–at least in part–up to the viewer to interpret.

The one concern I have with Rust Creek is that someone in Sawyer’s life certainly should have warned her about drinking river water. It often contains animal waste. So, consuming it can cause giardia, which is unpleasant. All things considered, maybe it was a calculated risk. Maybe she was warned at some point but could no longer deny her thirst. Whatever the reason, I worry about the safety and wellbeing of others. Even fictitious characters need to know that someone is looking out for them.