Chad Collins reflects upon his personal relationship with faith after watching 'Midnight Mass.' 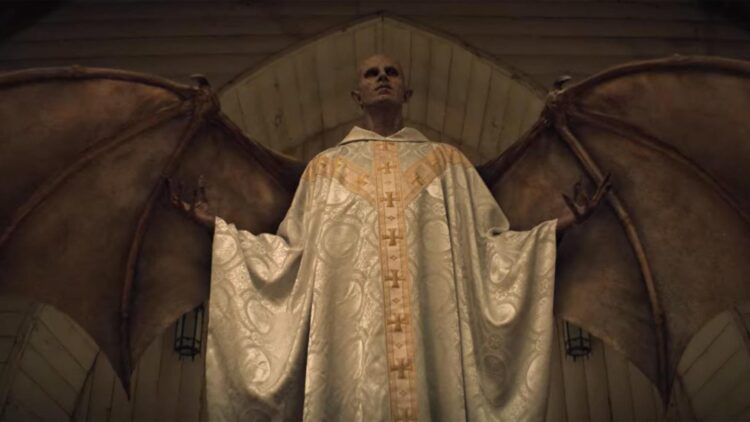 The church drained me. Vampiric in their intentions, my blood was boiled and blackened. It was sucked out of me with every sermon and friendship room soiree. A Catholic since birth, I went through every Sacrament, culminating in my Confirmation in eighth grade. I was baptized and accepted my first Sacrament of Reconciliation years later. There are Marriage and the Anointing of the Sick, whereby the suffering of the sick is mystically united with Christ during his Passion and death, neither of which I have yet experienced. There is, too, Ordination, a rite welcoming man into the priesthood. Those rites haunt in Midnight Mass.

Confirmation was my last Sacrament, but it will not be my last. Neither graduation nor rite of passage, it is the strengthening of the divine life bestowed during the Baptism. Initiates are nourished with the Eucharist and reconciled with their Penance. What it does is prepare individuals to defend and witness their faith in all walks of life; to both recognize and internalize the Holy Spirit. During the Sacrament, the Bishop slaps the anointed, symbolizing their transition into a soldier for Christ. Hamish Linklater’s Father Paul Hill (later revealed to be Monsignor Pruitt), says as much during his penultimate sermon in Mike Flanagan’s subversive, curative, and wickedly poignant Midnight Mass.

Related: GOD OF POWER, GOD OF FEAR: RELIGION AND SELF-RIGHTEOUSNESS IN ‘MIDNIGHT MASS’

The Catholic Church wanted me to be a soldier for Christ. But they didn’t want me to be a soldier of Christ. The broad schema of who I was, yes, but not the essence of who I both was and am. As a young queer man, I was the very enemy I had been sanctified to combat. There was an enduring and unwelcome sense that God didn’t love me. Though I did my best to ignore it, the systemic nature of the church– parishioners, sacred texts, and Papal infallibility– made their holy mission clear: to identify the wickedness within me and excise it.

Religious trauma is ubiquitous. By dint of its role as an interrogator of ailments and illness, the horror genre has recurrently drawn from the dark undercurrent of faith as a parasite. Though there are beacons of virtue and sacred exorcisms in the genre, horror should ostensibly confront, not reaffirm, the root of evil and suffering. Curiously, though, Mike Flanagan’s Midnight Mass simultaneously does both, maintaining the hallowed nature of faith in both self and the divine while catechizing the evils of the Church, made up of persons both fallible and furious in their own uncertainty. It’s not horror because it exorcises and destroys faith– it’s horror because it reaffirms it.

The gradient scale of my own religious trauma, ranging from mild discomfort to genuine nightmares of condemnation to Hell, never once jeopardized my faith in its entirety. I clung, however desperately, to the conception of my own faith, of my own relationship with God that the Bev Keanes (an exceptionally zealous Samantha Sloyan) could never hope to understand. The horrors of Midnight Mass are cathartic and infuriating. Children and animals are killed, and in the end, an entire community is reduced to dust, a flint of a once prosperous community. The explicit evil is vampirism, though Flanagan, subversive filmmaker that he is, adroitly centers the implicit evils of Crockett Island on the church.

The church of Crockett Island begets drinking and abuse, suffering and pain. It judges and chastises the woebegone and misunderstood while celebrating the right kind of sin. In the eyes of God, all sin is equal. Though in the eyes of Crockett Island, some sin is more sinful than others. As dogmatists commandeer school board meetings and condemn two women as bedfellows, it’s easy to walk away from Midnight Mass rejecting faith writ large. Faith, it seems, is the virus that infects the community; the vampiric blood that through bite or ingestion grows the congregation of the damned. They are the evil, and only in the sun, with their true natures exposed, can they be stopped.

Related: Demián Bichir Talks About Religion, Faith, & Being Buried Alive for THE NUN

Neil Diamond and the promise of the secular world are the alleged cure. It isn’t, though. Faith, however, conceived or practiced, is. It is in one’s own sacred text or faith in a nebulous divine. Faith in one’s children or partner. Faith in God, as so poignantly outlined by Kate Siegel’s Erin Greene in the finale, no matter what that God might be. It’s unlike most horror properties that either reject or embrace God writ large. Midnight Mass recognizes the evils of the church as run by man while ratifying the ways faith persists among those most hurt by it.

The reconciliation works largely on account of Mike Flanagan’s profound gift for storytelling and confronting trauma. Flanagan never belittles in the vein of Seth MacFarlane or Bill Maher. It’s too easy to dismiss faith outright, to see only the pollution and rot in the gilded churches. That rot and pollution are there, but for many, faith is not the church. Faith is ritual and hope– it is so many wonderful things.

With Midnight Mass, Mike Flanagan leaves room for everyone. Faith is kept alive in this nuanced horror story that sways to the rhythms of classic Stephen King. It is kept alive for those persons the church damned and discarded; those persons– like myself– abused and made to feel unwelcome. Midnight Mass leaves the door open for mass with the self, mass with community, and mass with a profound sense of faith. I am not a warrior, but I am faithful. As Kristin Lehman’s Annie Flynn says, “God doesn’t love me, or anyone like me, any less.”