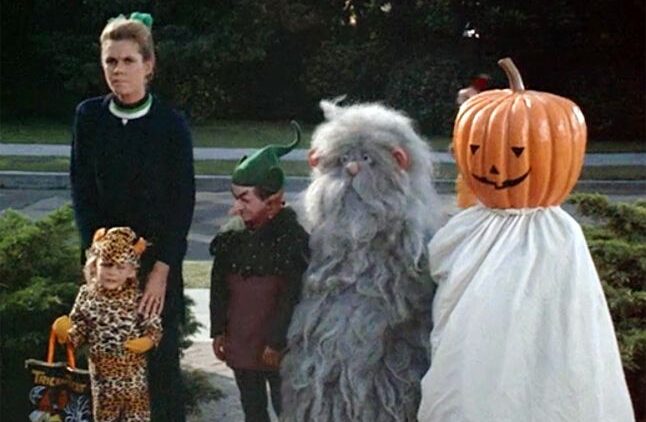 There are Halloween episodes aplenty. In the early days of television, sitcoms – those situation comedies that alleged to refract the real minutiae of family or professional life through the lens of some of Old Hollywood’s most famous stars – were still beholden to some kind of seasonal order. That is, they needed to cover what audiences were desperate for to ensure they were picked up for another season. Episodes about Christmas, summer break, and even Halloween were written in hopes that the show would be popular enough to mandate an extended run.

Plenty of contemporary sitcoms, of course, take advantage of full-season runs. Modern Family, Bob’s Burgers, and even The Office, beyond being classic shows in their own right, are famous for their Halloween episodes. The 90s classic Roseanne, too, was almost mythical in its yearly approach way to the season of haunts every year. There was, though, a curious case among older sitcoms, those innately conservative (and often problematic) vignettes of wholesome nuclear families living in the suburbs.

In the era of early Hammer and William Castle, these shows would often mine the horror well, releasing episodes in stark contrast to the tone of the rest of the show. They were, in other words, horror episodes. Here, we’ll review some of the scariest entries from a slate of classic sitcoms, the kind airing late at night on TV Land or WeTv. Be forewarned: some of these are liable to keep you up at night. Let’s begin.

Father Knows Best, adapted from the long-running radio series of the same name, was one of television’s first sitcom hits. It followed the Anderson family and their day-to-day lives with work, school, dating, and parenting. But the show had never done anything quite like “Margaret’s Premonition.”

Family matriarch Margaret (Jane Wyatt) starts the episode with an inexplicable streak of good luck. Several scenes later, she reasons she has the temporary ability to sense things yet to happen. There are some intermittent laughs, but the episode takes a stark shift in tone midway through when Margaret has a vision of her husband’s death on an unknown bridge. Margaret is gaslit, quite literally, into believing she’s made the whole thing up; she must be overwhelmed with the housework, that’s all. It’s genuinely frightening to watch as Margaret endures it all, still pleading with her husband, Jim (Robert Young) to not leave for a weekend business trip.

However, while on the way to his meeting, Jim learns it’s been postponed. He returns home, eager to make clear that he’s home not because of her, but on account of sheer chance. Later that night, their son returns home from a canceled baseball game. A mile of Hillsborough Road has washed away in the storm, the same road Jim would have been traveling. Had he gone, he’d certainly be dead.

The Donna Reed Show: “The House on the Hill”

Donna Reed herself once thought she could predict the future, too, in the sitcom’s season four episode “The Fortune Teller.” The real terror arrived, however, in “The House on the Hill.” Donna and her Woman’s Club are desperate for donations for the local children’s clinic and Donna suggests visiting the widowed Mrs. Allison, the richest woman in town. The other women, however, warn Donna: Mrs. Allison is an evil woman, who lives in a haunted house atop a hill. It’s all standard suburban gothic gossip until Donna actually arrives.

Though Mrs. Allison is happy to make a donation, she asks Donna to return the following day. Only, Donna’s car won’t start. Donna wanders the labyrinthian manor, looking for help with her car. Slowly she begins to suspect that she is being kept there on purpose. Alex, her husband arrives, but Donna is too late to catch him, and Mrs. Allison deceives her– it wasn’t (though it was) your husband. It culminates in Donna desperately trying to flee. But rather than finishing with a big twist, the episode ends with Donna’s vindication. Mrs. Allison, desperate for a friend, was keeping Donna locked away there. It’s very dark.

The Hogan Family, originally known as Valerie, is a dark enough sitcom without its genuinely frightening episodes. After titular star Valerie Harper demands a higher salary, the show’s creators punished her in the worst way possible. They kill her off in a horrific auto accident between seasons and leaving her fractured family to deal with the fallout. Already scarred, it’s no wonder the children– including a young Jason Bateman– are so susceptible to horror flicks.

Harper’s replacement was Sandy Duncan’s aunt, also named Sandy, and one stormy evening, she acquiesces and allows the kids to watch a gory zombie movie. There were several ways the episode could have gone, but episode director Richard Correll wisely lets genre dominate. The three boys are plagued by nightmares that evening and the episode features several standout jolts as the lines between reality and dream are blurred. Granted, all is well in the morning. But it’s still a night to remember.

The Facts of Life went all out in its penultimate season, playing with form and format more than ever before. The sitcom had already undergone considerable upheaval, including the arrival of star George Clooney in one of his earliest roles, with the recognition that its central conceit of five girls at a boarding school couldn’t alone keep a show afloat, let alone for nine seasons. The girls have graduated, are living together, and work together in a novelty shop, Over Our Heads. A riff on both The Twilight Zone and Agatha Christie’s Ten Little Indians, “Seven Little Indians” is only the second Halloween episode the show ever did during its entire run.

Cloris Leachman’s Beverly Ann awakes in front of the fire one dark and stormy night. Concerned that the girls aren’t home, she phones George Clooney to check in on them at the theater. As she retreats to the kitchen, a mysterious stranger riffing Rod Serling introduces us to the episode’s conceit, narrating and remarking on the strange occurrences around the house.

Related: Nearly Every THE TWILIGHT ZONE Opening Monologue Synced to Land on the Perfect Moment

The girls soon arrive home with Clooney, and most of them are still shaken by the movie, aptly titled “The Halloween Hacker 3: Part 6: Dave Returns…Again,” a movie I’d genuinely like to see. Soon, they find themselves trapped in the house, and one by one, someone is killing them off. The audience, of course, is easily clued in that this is all some kind of dream or nightmare, but it’s still a devilishly good time to see such beloved sitcom stars bite it in imaginatively gruesome ways (or, well, as gruesome as the rating system would permit). The conventional horror hallmarks are there, including effective jolts and bolts of lightning. The episode wisely concludes on a sensational joke. Not simply a dream, it was instead a dream within a dream, within a dream, within a dream… into perpetuity.

Bewitched: “A Safe and Sane Halloween”

Bewitched, the seminal supernatural sitcom starring the inimitably effervescent Elizabeth Montgomery, had a number of standout Halloween episodes. Season 1’s “The Witches Are Out” is a surprisingly poignant and incisive civil rights allegory. With the current of supernaturalism running through every episode, Bewitched had the unenviable task of making every seasonal outing just a little bit more special than the average sitcom. “A Safe and Sane Halloween,” however, went so far out there, it’s a genuine wonder why it isn’t more frequently discussed.

The episode is often genuinely nightmare-inducing. Samantha and Darren’s (Dick York) daughter, Tabitha (Erin Murphy), accidentally summons a menagerie of old Halloween costumes, all rendered physically, from her old storybook. A goblin, jack-o-lantern, and a gremlin, they waste no time breaking free from the Stephens’ household. Once free, they cause mischief all over town. They genuinely terrify the residents until Samantha manages to capture them and set things right. It’s an enduringly frightening episode with Hitchcockian edge that holds up decades later.