If it's disturbing then we should talk about it. 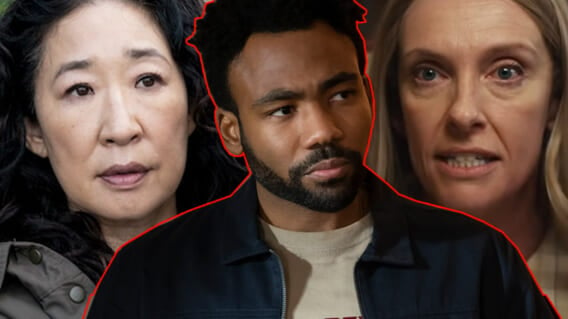 Disturbing art usually falls under the genre umbrella. This is why the Alien debate has been an ongoing unnecessary pain in the ass. Our beloved genre is a murky one that often (and rightfully) bleeds into thrillers, sci-fi, true crime, etc. However, we love to put shows into boxes. This results in quite a few genre adjacent shows being left out of the conversation.

I can’t figure out why we gatekeep the disturbing shows we love and deny them one of their rightful labels. However, I can shout out a few of the many shows that I love in a streaming guide. I present to The Midnight Society: 5 Disturbing Shows That Fit Comfortably Under The Genre Umbrella.

Donald Glover and company often find their show marketed as a comedy. However, the show has been jarring and tense since day one. Season one had a lot of upsetting imagery mixed in with dark humor that often stayed with me. Season two explored being trapped in various situations and instilling dread in us every episode. It gave us unhinged standout episodes like “Teddy Perkins” and “Woods.” This current season opened with a very scary episode, “Three Slaps,” inspired by a true story about a kid adopted by two sinister white women. It was followed by “Sinterklaas is Coming to Town” which felt like an homage to Midsommar. Most of the horror stems from the Black experience in America. However, it’s also very evident that this writers room understands horror, comedy, and everything in between.

Cassie (Kaley Cuoco) witnesses a murder and becomes the messy final girl we don’t talk about enough. She even makes questionable choices that stress us out which we expect from a final girl. We also have the show stealing queen Michelle Gomez along for most of season one. She plays the violent and efficient Miranda that is an instant favorite as she does her disturbing work. If Ms. Gomez is on your show then your series probably needs to get under this genre umbrella. Season one found Cassie haunted by images of the dead one-night stand that led her into this rollercoaster of an adventure. Season two turned her mind palace into a less bloody but more traumatic place. Both seasons are as deadly and addictive as they are fun.

Season one had the goddess Phoebe Waller-Bridge as showrunner bringing her dark comedic timing to what was the most fun and refreshing thriller in years. The amazing Sandra Oh was finally a lead and joined by Jodie Comer’s unhinged (but equally fashionable) Villanelle. There was just enough espionage to trick people into not asking genre questions. However, Villanelle’s kills and outfits tell a different story. The first three seasons were such a fun ride as we checked in to see if the two lead characters would get together or kill each other. Although, it was always fun seeing who would get killed along the way. If it’s the first watch then I’m going to advise you to tap out before the series finale. Trust me.

The first season finds Nadia (played by Natasha Lyonne) in a time loop. She keeps reliving her birthday party because she keeps dying. If that doesn’t warrant a few inches of the genre umbrella then I don’t know what does. The first season was almost perfect and kept us on the edge of our seats trying to figure it out. The second season finds Nadia in an even more disturbing situation as she’s in her dead mother’s body. I had to pause after that revelation because that was too scary for me. I’m going to go back in when I’m done screaming. I’m also just really into this because I love to see messy complicated women in sci-fi. Especially, when it’s smart and funny sci-fi.

True crime and horror often blend together even though it’s not usually my cup of tea. However, I will follow Toni Collette anywhere. While I vaguely remember Michael Peterson being in the news forever ago, I didn’t realize how long this case went on. I also didn’t know enough about how his wife was found at the bottom of the stairs to understand the confusion. I find the show disturbing and stressful so I keep having to take breaks. Although, most people have a better tolerance for true crime than I do so it might just be me. This HBOMax miniseries shares the name of the 2004 documentary about the same trial. If you’re watching this and want more then you can watch the documentary on Netflix.

Let me know what disturbing shows you think should be included in genre conversations at @misssharai. Also, make sure you’re watching A Black Lady Sketch Show because the wrap-around story definitely makes it a part of this conversation.