5 Movies That Will Make You Cancel That Gym Membership

Tell your gym to lose your credit card number and watch these movies instead. 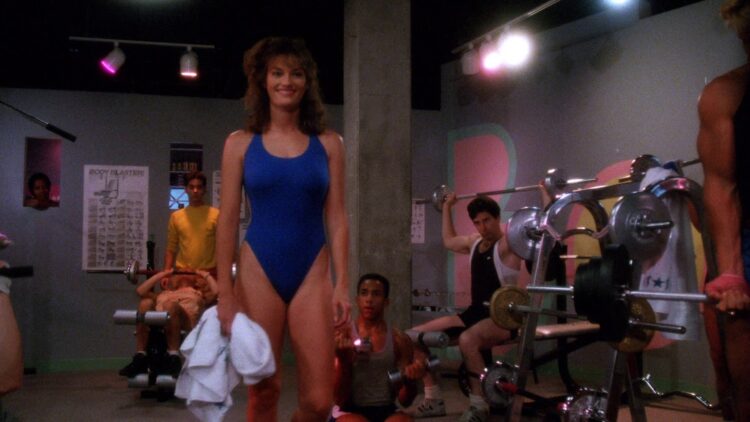 Most people use January as an excuse to hit the gym. Most New Year resolutions involve fitness. So much so, that gyms even run special discounts at the top of the year. What these gyms leave out though, is that a lot of horror movie deaths happen in gyms. That’s right! So, those jokes about people canceling their gym memberships early in the year are not as funny as we thought. In this essay (or listicle), I will add more reasons to the already long list of reasons I avoid gyms. After reading about these 5 Movies That Will Make You Cancel That Gym Membership, you might also want to reconsider.

Candice Hooper (played by Ellen Wroe) survived a bridge collapse just to be taken down by support beams in a gymnastic rehearsal. She finds herself thrown for a loop and dropped into a position that I like to call “The Failed Malignant”. To make matters worse, she did not even want to rehearse on this day. Her shifty boyfriend talked her into doing it after she said it did not feel right. Apparently, he didn’t know that gyms are dangerous places to be when Death is looking for you. Because this fifth movie takes place before the first one, you might want to cut him some slack. You might want to argue he didn’t know death is all around them. You are wrong to do that though. However, I am too busy trying to figure out this math to get further into it right now.

Lewis Romero (played by Texas Battle) narrowly avoided a roller coaster death but will not let that stop him from pumping that iron. His dedication to working out and love of winning is all we know about this gym casualty. Our two leads had to track him down at a gym before a big game to warn him that Death is coming for him. Lewis is too focused on his workout, and getting his head into the game, to take them or the elaborate coincidences that almost kill him in this scene seriously. His last words, as he pulls the weights down to punctuate his point are, “All I do is win!” Of course, the weights crush his head, and his classmates that tried to warn him now have to wash Lewis out of their clothes and hair.

Where You Can Watch: Vudu

You might think the spa part of the gym would be safe. Not in Death Spa! So many people die in so many ways in so many different areas of this spa. It makes me think of the times I was in danger walking past a gym on my way to a bar and didn’t even know. People get hurt in steam rooms, locker rooms, tiles attack people in showers…it’s not safe here. No corner of this building is safe, and I see why the title was the only appropriate title for this movie. If you’re one of the people that think going to the gym is safe as long as you do not engage with any of the equipment then this movie will change your life!

Where You Can Watch: Crackle

Greg (played by Richard Rebiere) thought the silent person walking up to him was coming to spot him. He laid there watching as this person put more weights onto his load. He thought he was safe because he didn’t read this article. After all, I wasn’t born yet. Not only does this silent figure put too much weight onto what Greg is lifting, but he also removes the situation that Greg could have sat it back on. As Greg begins to realize he should have noticed something was off when the figure wearing all black never responded to him, the person tosses one more weight at him. Tosses it right onto Greg’s dick which causes him to drop the hundreds of pounds he is holding onto his neck. Greg, and his dick, would have probably been fine if they just had a beer and called it a night.

Big Al (played by Craig Robinson) decides to stay late and continue his workout even after the gym is closed. This is where our two murderers find him and the result is hilarious, but also deadly. Weights get thrown, mirrors get shattered, people get choked and Big Al puts up a good fight. Sadly, his workout ends the same way everyone else’s on this list does. With him meeting his untimely demise via workout equipment. He falls back onto a weight bench after being stabbed in the back. The barbell rushing to crush his skull is the last thing Big Al sees in this horror-comedy. A gym claims another beloved character, and we are left to wonder what could have been had he just gone home and eaten chips.

A Nightmare on Elm Street 4: The Dream Master

When Freddy kills one too many of her friends, Debbie (played by Brooke Theiss-Genesse) decides to put on some sensual music and lift some weights. Freddy Krueger shows up as her gym partner and bends her arms backward before turning her into a giant bug and killing her. That’s right. Freddy’s rude ass showed up and used her biggest fear against her as she was lifting weights. Yet another reason you will never catch me near a gym.

After her twin sister dies in a tanning salon, Rhonda is found running a gym where people are mysteriously dying. Just because I haven’t seen this movie does not mean that I am not already getting a strong sense that it’s going to be one of my favorites from this deep dive. The movie is also known as Aerobicide. This is one of the more notable horror movies that took on fitness culture during the ’80s.

Some of you will brave the gym even after this scientific study. And that’s okay. Whether you cancel that membership or not, you can follow me @misssharai.