Imaginary friends are good and fun until they get violent... 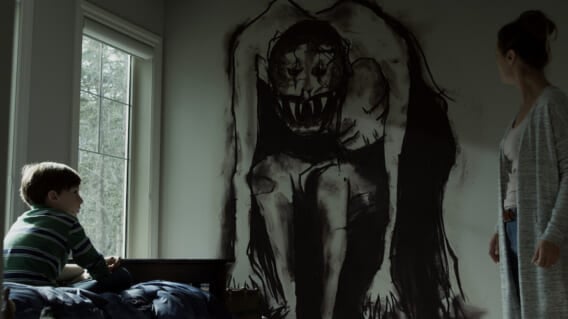 I’m not sure about you, but imaginary friends were an integral part of my childhood. As a kid with an overactive imagination and a rocky home life, these figments of my imagination brought me comfort. Yes, hearing me chatter away to people my parents couldn’t see was probably creepy. So it’s no wonder this rather common childhood experience is ripe for horror picking. You never know when that imaginary friend may just turn out to be something a bit more tangible. And that’s because, in horror, an imaginary friend usually turns out to be a demon or a pissed-off ghost.

In Addison Heimann’s new film Hypochondriac, Will begins seeing what appears to be a person in a demented Halloween costume from his past. As Will tries to parse out what’s happening to him, this “friend” only gets creepier and more malicious.

In honor of Hypochondriac, we’re looking at horror’s ten scariest imaginary friends and the hell they wrought upon children and adults alike.

There’s a comparison to be made between Donnie Darko and Hypochondriac in both their use of a terrifying animal costume to represent an object of their main character’s imagination. But in Donnie Darko, Frank the Rabbit is much more cosmically terrifying. He appears, speaking of numbers and dates when a great tragedy will befall Donnie. The design of Frank was seared into my young mind and terrified me until well into my teenage years.

The titular May in Lucky McKee’s 2002 horror film just wants a friend. So much so that she follows her mother’s advice to make one of her own. At first, May’s imaginary friend is a pretty doll that lives carefully preserved in a glass case. But, as May meets an attractive man with such beautiful hands, she realizes that she can in fact crew her own friend made of all the perfect human parts she sees in her life. May plays with the idea of making the imaginary real and its horrifying consequences.

In my humble opinion, this is the best entry in the Paranormal Activity franchise behind the original film. It takes place in 1988, when Katie and her sister Kristi (seen in the first two films) were little kids and the demonic haunting began. One day, young Kristi states she has an imaginary friend named Tobi. But, once Tobi enters the picture, strange things start happening around their house. That includes the iconic oscillating fan moment involving something under a sheet.

Danny Torrance is a strange kid. He’s able to “shine” which means he has psychic abilities. With these powers come an imaginary friend named Tony who lives under Danny’s tongue. When he “speaks”, Danny uses a raspy voice and wiggles his pointer figure, as if the figure stands for Tony’s mouth. He’s the one who utters “redrum” for the first time and shows Danny premonitions of the violence to come.

In Magic, a young Anthony Hopkins plays Corky, a ventriloquist with a dummy named Fats. When Corky returns to his hometown and begins to settle down, Fats has different plans for them. Here, the imaginary friend has more of a corporeal form. It is an actual doll, after all. But as Corky continues to interact and use the puppet, it takes on a terrifying life of its own.

In Daniel Isn’t Real, Luke suffers a violent trauma. In an attempt to cope with the after effects, he conjures up his childhood imaginary friend Daniel. Daniel is a hot Patrick Bateman-type with the perfect body, massive smarts, and simply oozes charisma. Basically he’s everything Luke wishes he could be. But as Luke spends more time with Daniel, Daniel begins to bleed even more into reality. Luke slowly loses control over his life as his seemingly imaginary friend wraps himself even tighter around Luke.

This one’s a doozy, folks. A doctor uses a giant anatomical doll named Pin to teach his kids about body functions. When he speaks as Pin, like a ventriloquist doll, his son Leon thinks Pin is a real person. He starts to see Pin as a brother. And when his father tries to remove Pin from the equation, it goes south. Fast.

Brandon Christensen’s terrifying 2019 film was one of the scariest imaginary friends committed to the screen. Beth is a young mother whose son begins to play with an imaginary friend named “Z”. But as Z becomes a regular figure in her son’s life, her son becomes more and more violent. There’s one scene, in particular, involving a set of stairs that showcases how dark this film is willing to get. Then, when he finally Z’s physical form, it is a moment of pure terror. I almost slammed my computer shut. Z is an absolute nightmare and I mean that as the highest compliment.

After the deaths of their parents, two little girls disappear into the woods. Five years later, they’re found living in a dilapidated cabin. They’re sent to live with their uncle Lucas and his girlfriend Annabel (a surprising punk rock Jessica Chastain), who do their best to make the girls feel at home. But something followed them from the woods. They call something, a seeming imaginary friend, “Mama”. But as the kids settle into their new lives, Mama gets angrier and angrier.

Captain Howdy is the imaginary friend to end all imaginary friends. Mostly because he’s actually the demon Pazuzu ready to swallow the soul of a young Regan. He first makes himself known to Regan as an innocent enough figure who just wants to play. But the closer he gets to Regan, the more he infiltrates her impressionable psyche. And with a name like Captain Howdy, he sounds like a nice guy. But that’s how they all get us, isn’t it.