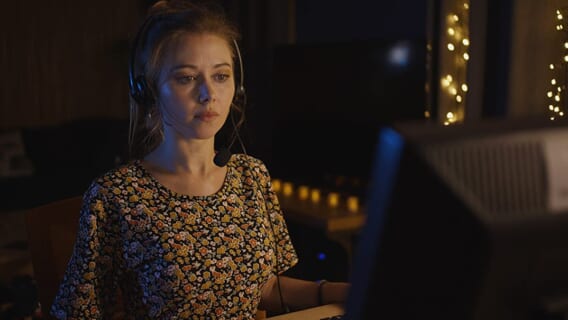 Most of us have probably had moments when we have wanted to throw our phones against a wall when dealing with customer service agents. And Minacious, which recently screened at Horror-on-Sea, will certainly make us want to be more polite and respectful every time we need to call a bank to ask them to cancel a lost or stolen card. After all, we are speaking to fellow human beings, and we would do well to remember this.

Sarah Alexandra Marks stars as Izzy Robertson, an overly-sensitive bank customer service agent who breaks down in tears and takes the rest of the day off after speaking to a rude caller. Although she normally works in a call center, Izzy soon decides to begin taking calls in her rich uncle’s rural country house. That way she can serve as a house sitter while continuing her customer service job. However, working remotely doesn’t work in Izzy’s favor, as she soon finds herself being menaced by a psychotic caller named Caleb Baxter.

Before the horror elements kick in, however, we’re treated to a prolonged sequence of Izzy taking calls from individuals with a huge variety of issues. This gives us just a taste of what customer service agents face every day. Although this scene did perhaps run for too long, it will still help viewers empathize with the faceless customer service employees we often speak to, who no doubt receive countless frustrating calls. Izzy manages to stay calm and collected while dealing with the large plethora of frustrating callers. She even struggles not to laugh when a man politely asks her to remove embarrassing payments from his joint account statement before his wife notices them.

Marks is certainly persuasive as Izzy, who struggles not to let her sensitive nature get the better of her as she deals with endless bothersome calls while also being hounded by her demanding boss (Dani Thompson), who clearly expects her employees to reach unrealistic quotas.

Eric Roberts is known for starring in dozens of films every year, and his IMDb page currently displays a large number of upcoming projects. Because of the gigantic number of films the Oscar-nominated actor appears in, Roberts usually only shows up for a few days of shooting and plays relatively forgettable roles before quickly moving on to his project. So it came as a relief for him to actually deliver a memorable performance in Minacious, even though it was only a voice role.

He’s perfectly chilling as the voice of the bloodthirsty Caleb, who clearly delights in tormenting Izzy with his threatening calls. Although he was literally phoning it in, this might be Roberts’ best performance in years. It should also be mentioned that former Doctor Who actor Colin Baker also voices an elderly police officer who offers advice to Izzy over the phone. Seeing as Eric Roberts is also a former Doctor Who veteran, Whovians will no doubt be immediately drawn to Minacious. They might even be able to forgive Roberts for the 1996 Doctor Who TV movie.

Unfortunately, the strong performances and the tension that writer and director Richard Anthony Dunford had worked so hard to build up in the first two acts were let down by the weak climax. Minacious devolves into a largely standard home invasion thriller after Caleb breaks into the house where Izzy is staying. Caleb is clearly played by a double throughout these scenes, which the filmmakers tried to hide by having him wear a creepy skull mask (which Izzy’s uncle had displayed in the house, much to her chagrin).

To make matters worse, Caleb literally only has one line throughout the home invasion climax scenes, so viewers were not treated to Roberts’ highly entertaining delivery as Caleb stalks Izzy throughout the house. The ludicrous way in which Izzy dispatches her stalker will also leave most viewers shaking their heads. You really don’t know if you were actually supposed to take this scene seriously or to laugh at it.

Regardless of the issues with the third act, Minacious still proves to be a highly effective and at times, surprisingly amusing stalker-themed horror film about the lengths a dissatisfied caller goes to in order to torment a customer service agent after she doesn’t do as he says. Marks is certainly impressive in the lead role, and Roberts is brilliantly entertaining. Ultimately, Minacious is an interesting game of cat and mouse that falters in the third act. Regardless, the strength of the first two acts certainly helps to make this an entertaining and highly watchable thriller about the daily ordeals when working in customer service.