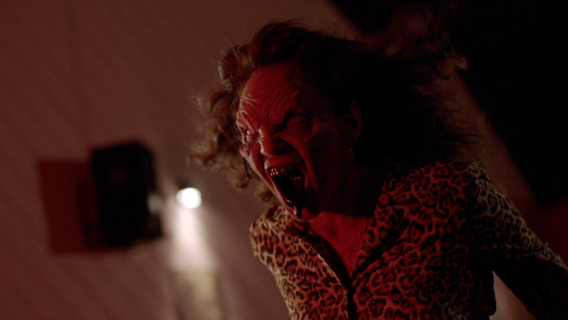 Fabián Forte’s Legions is ostensibly inspired by Sam Raimi’s seminal classic The Evil Dead. Promotional material is making heavy use of what might well be a Deadite. Featured is a conspicuous, milky-eyed homage to Raimi’s titular evil. Fortunately, and unfortunately, Forte’s (an assistant director on the sensationally scary Terrified) Legions isn’t all that much like the, well, legions of The Evil Dead-esque projects in recent years. Instead, Legions is considerably more patient. The movie operates as more of an occult character study for most of its runtime, with its gnarliest effects saved for a truncated final act.

Audiences expecting a kind of appetizer for Evil Dead Rise are liable to be disappointed. It’s always difficult to be served a dish quite unlike what it suggested itself to be. While there’s some gruesome carnage saved for the final fifteen minutes, Legions is more patient, and more evocative, than its clear progenitor. As a kind of singular, stripped-down Raimi homage, Legions works. As a visceral feat of carnage, not so much.

Antonio Poyju (Germán De Silva) belongs to a lineage of missionaries and powerful occult men. Living deep in the woods, these missionaries were community healers. They addressed the kind of demonic ailments that modern medicine hasn’t quite caught up with. Audiences are first introduced to a younger Poyju as he combats evil forces. Then, the movie introduces audiences to Poyju’s present predicament—he’s been incarcerated in a state asylum. Luckily, Forte avoids the asylum cliché, and Poyju’s imprisonment is more a plot device than a thematic vehicle. He’s got several friends with whom he shares his stories. Even better, he’s even consulting on a new play that involves a fight against demons. He has plenty of notes.

Soon, however, Poyju is informed of the return of Kuaraya, an ancient entity that intends to sacrifice Poyju’s daughter, Helena (Lorena Vega) on the day of the blood moon. Unfortunately, Helena has abandoned her roots. Aside from a few ill-advised nightmares, a branding pitch is as exciting (and demonic) as her life presently gets.

Legions takes a long while to get going. While the asylum antics are cute, making use of some Voodoo magic and excellent contortionists, Helena’s disparate thread is less compelling. As a commentary on the roots and urgent endurance of mysticism, it’s nice to see Helena successfully treat a co-worker’s stye, yet the thematic depth simply isn’t there. Additionally, Forte often cuts away from the present to sketch out more of the past, arriving at answers the audience has already deduced.

Even Poyju’s escape and attempts to reignite Helena’s faith feel considerably more lackadaisical than the circumstances demand. While the off-kilter humor is appreciated, granting Legions some much-needed zest, the central conflict is often out of focus. The mystic shenanigans, including a second-act office disappearing act, show Forte at his best, wallpapering Legions with a distinct cultural identity and appreciation for heritage most possession yarns eschew for just one more bucket of blood.

As a result, when Legions finally arrives at the bloodshed, it at times feels as if it belongs to an entirely different movie. The patient character work is cast aside for a demon or two (certainly not the title’s promised legions). Yet, in a curious way, it mostly works. Homage is innately difficult to accomplish. Adhere too closely to the inspiration and risk the audience questioning why they shouldn’t just watch the original. Stray too far, and risk accusations of capitalizing on a known property without any of the effort.

Fabián Forte clearly loves The Evil Dead. Legions can be wickedly funny, and while the deaths are few, those that do feature are sufficiently grisly, the perfect balance between gross and cool. Rather than merely replicate Raimi beat for beat, Forte’s Argentinian effort is its own thing. While that won’t work for everyone, there’s something endearing about a life-affirming, low-stakes approach to an apocalyptic, demonic takeover.

Legions is a heartfelt, yet meandering, Evil Dead homage