‘Mike Mignola: Drawing Monsters’ Is One For The Hellboy Crowd [FilmQuest 2022 Review] 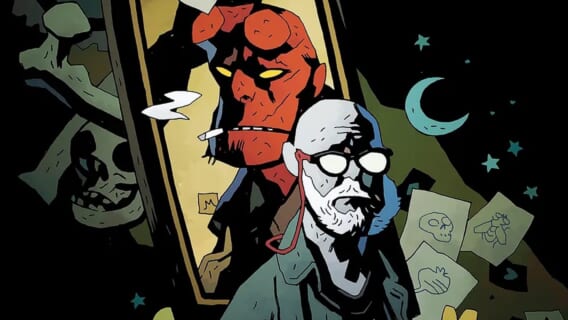 Mike Mignola: Drawing Monsters gives us a glimpse of the man behind the Hellboy universe. It takes us back to the beginning of Mignola’s journey as an aspiring comic artist and guides us through Hellboy’s humble beginnings. Directors Kevin Konrad Hanna and Jim Demonakos paint us a picture of a nerd just like us, whose art has gone on to inspire some of our other favorite artists.

Drawing Monsters not only allows us to hear Mignola discuss what it has been like to see his creation grow into the world we know today, but it also allows us to see how some of the themes we respond to in his work hit just as close to home for him as it does his fans. A few decades ago, a kid set out to draw monsters and carved a path through a very difficult New York scene to do just that. It’s a very cool reminder for those of us who haven’t gotten whatever our big break is to keep going. That success doesn’t come overnight, especially for those of us who march to the beat of our own drum. It’s also a very strong reminder that the places you think you want to work for might not be the best vehicles for your full potential.

Also Read: ‘A Life On The Farm’ Is Sadly Uplifting [FilmQuest 2022 Review]

The documentary also is surprisingly celebrity-filled for a Kickstarter project. Among the notable interviews are Guillermo del Toro, Ron Perlman, Neil Gaiman, and Rebecca Sugar. We expect del Toro and Perlman because the Hellboy movies are how many of us got into this world as children. Hearing how long it took them to get their film greenlit is illuminating. Listening to them discuss their respect for each other and friendships, while also stanning each other is beautiful. It also gets very honest as they explain the hardships of collaborating on something so dear to each of them. These moments are some of the highlights of the film.

However, Sugar’s appearance is my favorite of the interviews. Sugar is the creator of Steven Universe. So seeing her chime in about her love for Mignola’s work and how it has influenced her career was possibly the most touching of all the interviews. A documentary with so many celebrities celebrating the subject is cool. However, an artist talking about another artist’s work in the same field is what I’m really why I’m here.

My biggest note for Drawing Monsters is that it feels unfinished, but that’s because it is. Mignola isn’t slowing down anytime soon. So the lack of closure is good for those of us who want more stories. However, it feels weird as they pulled together interviews to try to give us an endpoint that doesn’t exist. Perhaps, in a few decades, they can get the band back together and give us a part two that can give us a more definitive button on the man, the myth, the legend. I’m sure many of us that donated to this Kickstarter would open our wallets again.

Mike Mignola: Drawing Monsters set out to celebrate a visionary comic book character that launched an entire universe populated by unique heroes, misfits, and monsters. It also promised us that, “This is a film for fans of the Hellboy universe and the Hellboy movies, but more than that, it’s a film for anyone interested in creativity and the imagination,” and it delivered.

Have you seen Mike Mignola: Drawing Monsters? Then let me know your thoughts @misssharai.

Mike Mignola: Drawing Monsters is a charming documentary about the man behind Hellboy. It’s a good time for die hard fans, casual observers of the Hellboy universe, or artists that just need that reminder that sometimes the places you want to be are not where you need to be.