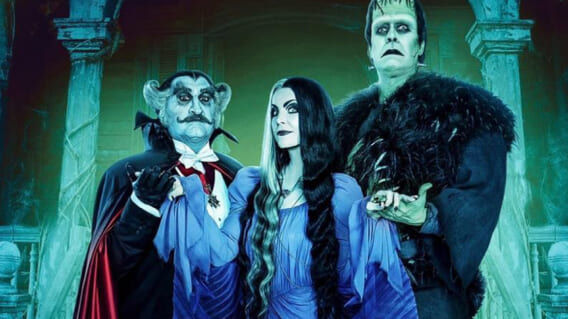 Musician-turned-director Rob Zombie is known for painting with a rather bloody brush. From his debut feature film House of 1000 Corpses to his take on the Halloween franchise, Zombie loves to get dirty and trashy. But, there’s another side to the horror filmmaker; he’s also a huge fan of the 1960s sitcom The Munsters. For over a decade, Zombie has been trying to make his tribute to the series, a love letter to the scary-yet-loveable family that resides at Mockingbird Lane. After years of stopping and starting, Rob Zombie’s The Munsters is finally here and delivers a campy, colorful, and uneven romp through Transylvania.

This take on The Munsters is a prequel, the tale of Lily (Sheri Moon Zombie) and Herman’s (Jeff Daniel Phillips) meet-cute and how they end up in their iconic house on Mockingbird Lane. Lily lives in Transylvania with her father, The Count (Daniel Roebuck), and is desperately searching for love. We see her go on awkward dates that would rival any Bumble horror story. This includes a Count Orlock-looking creature with an obsession with rats and the plague. While The Count keeps trying to set her up with rich men, Lily pines for someone who can really make her feel something. Enter Herman Munster.

Freshly pieced together and resurrected by Richard Brake’s Dr. Henry Augustus Wolfgang, Herman becomes an immediate sensation with his adolescent humor and penchant for rock and roll. Once the two of them meet, the rest is romantic history. Well, sort of. The Munsters follows their budding relationship, as well as the hijinks they face along the way involving Lily’s werewolf brother Lester (Thomas Boykin) and his constant need for cash. Think of this as almost a slideshow prequel of how America’s favorite monster family got its start.

I say slideshow because The Munsters does feel like several episodes of the show strung together rather than one cohesive narrative. Sure, the connective tissue is the start of Lily and Herman’s relationship. But it’s mostly presented as vignettes filled with slapstick comedy and silly mishaps that’ll tickle adults and younger audiences alike. Now with this format, the film does tend to drag in certain places, especially when Zombie is trying to push the plot forward regarding Lester’s get-rich-quick schemes.

But, thanks to impeccable set and costume designs, there’s always something pretty to look at. From The Count’s castle to downtown Transylvania, each frame is packed to the brim with bright colors, monsters, and silly details guaranteed to get a chuckle out of you. The amount of love poured into creating the ancestral land of the Munsters is apparent in every frame. That alone is an incentive to check out the film.

Then, there are the performances from our core three: Moon Zombie, Phillips, and Roebuck. Moon Zombie commits the most strongly to the bit, emulating the mannerisms of OG Lily Munster Yvonne De Carlo. Her hand flourishes and waifish voice show off how much she researched and prepared for the role, no question. However, Moon Zombie’s dedication to Lily’s camp sensibilities makes her feel like she’s acting in a totally different movie.

Now, this isn’t to say that Phillips and Roebuck aren’t giving in their all. The two of them play brilliantly off each other as the son-in-law and father-in-law that are constantly at odds. Roebuck especially gives a gorgeous turn as The Count. But their comedy feels more grounded despite the outlandish costumes that transform them into, well, monsters. Two-thirds of the dynamic trio are on one wavelength, and their female counterpart is very much on another. This makes some joke delivery a bit stilted and awkward. Regardless, this is a film that knows what it is and its cast leans into the outrageous with reckless abandon.

Overall, The Munsters is camp and Zombie leans into that sensibility with varying degrees of success. This is a film made first and foremost for fans of the sitcom and for those who wish to pass on the monstrous legacy. With that, Zombie definitely hits his mark. From strong core performances to impeccable set design, The Munsters proves it’s the perfect Halloween fun for the whole family.

Rob Zombie delivers a campy, fun, and uneven romp through the cobblestone streets of Transylvania with his take on ‘The Munsters’.