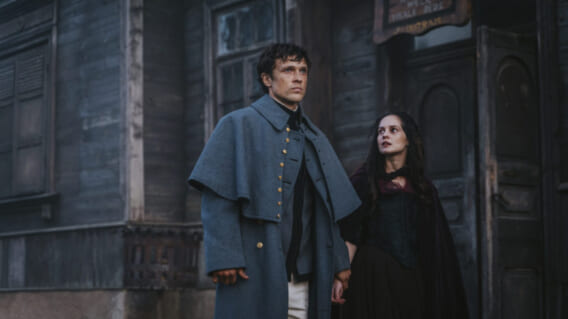 Raven’s Hollow invites us into a world where Edgar Allan Poe and four other cadets stumble into a gruesome mystery in a weird community. It pulls us in with the idea of having a literary figure solve a supernatural mystery. Most of us know about Edgar Allan Poe and are familiar enough with his stories to get some references.

Raven’s Hollow is frustratingly slow, which is unforgivable due to the lack of payoff. This film is nothing but one vibe in a trench coat. This is sad because it’s a good vibe but is not enough to make up a good idea gone to seed. What could have been an exciting gothic murder mystery feels like an excruciatingly long flashback on a CW show that no one wanted. One that left me feeling trapped and wishing I could change the channel.

One of the few saving graces of the film is seeing Kate Dickie as Elizabeth Ingram, who most of us know from Game of Thrones. However, she is not given nearly enough to do in this restrained world of politely sanitized mayhem. I found myself getting lost in the bad wigs and then trying to muster interest in the “twists” that are about as spicy as flour. Another bright spot was Oberon K.A. Adjepong (who plays Usher) who is the only Black person in the film. I was rooting for him because he was doing everything he could with the tropes he was tossed. I found myself rolling my eyes and making a note to see him do something outside of this debacle. We can create worlds of fiction. We can even twist the lives of literary figures to fit them into worlds inspired by their work. However, we can still only have one Black person who must serve and protect. For whom?

Some of the costumes were also cool and helped mask the wigs that weren’t working. Dickie’s wardrobe understood the gothic assignment and nailed it. I lived, and I want the story her dresses were giving us instead of the one Raven’s Hollow is. I also liked most of the pieces on Melanie Zanetti (who plays Charlotte Ingram). Also, I have to admit it was cool to see Poe and the cadets wearing cloaks reminiscent of the wives from The Handmaid’s Tale. The costumes were probably my favorite part of the movie, and I hope that team knows they slayed.

Raven’s Hollow is not my favorite Shudder original, but I don’t need the whole catalog to cater to me. I think part of the fun of Shudder’s productions is that they’re a mixed bag, but will eventually come back around to whatever each of us is into. I was not into this movie as a whole. Some of the aesthetics were pretty cool, but the math didn’t equal up. This is unfortunate because there were so many sparks that I expected to lead to at least one fire. Overall, Raven’s Hollow lived up to its name but not its potential. However, I’m not mad. I’m just disappointed.

Let me know what you think of Raven’s Hollow at @misssharai.

Raven’s Hollow never really believes in itself, which is frustrating for a viewer. It’s a waste of an okay idea and some cool gothic vibes.