Plus he explains what he thinks is the difference between psychological thrillers and horror. 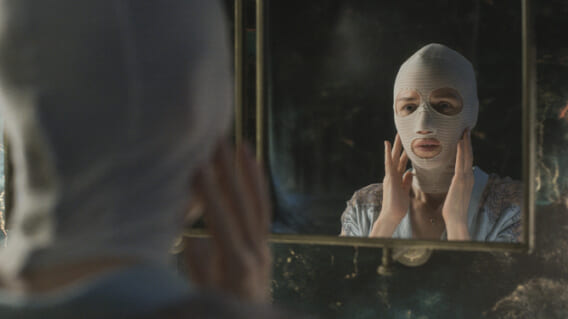 Veronika Franz and Severin Fiala’s 2014 film Goodnight Mommy shocked audiences with a terrifying depiction of twin boys trying to determine if a woman really is their mother. Now, eight years after its release, director Matt Sobel is tackling an English-language remake of the film.

Sobel’s rendition stars Naomi Watts as the titular mommy, and twins Cameron and Nicholas Crovetti as the creepy twins. The 2022 version of Goodnight Mommy follows a similar story to the original, with a few unique twists from Sobel and writer Kyle Warren.

Dread Central sat down with Sobel over Zoom to chat about the Goodnight Mommy remake, working with kids, the difference between psychological thriller and horror, and more.

DC: I’m super stoked to talk to you today. What was the biggest challenge in approaching a remake of a film, especially one that was made relatively recently?

Matt Sobel: It was definitely my inherent suspicion of remakes. So I initially turned down this project. I told the producers at Animal Kingdom, “Good luck. I understand why you wanna remake this, but I really don’t like when things are remade just for people who don’t wanna read subtitles. And so I think it’s not for me”. It was only as I was discussing Goodnight Mommy with a friend of mine, Kyle Warren, who would end up writing this film that we came up with this notion that a remake could be done in a different way where it’s less about translating the original story, which already works. We both were fans of the original film. So for an English-speaking audience, it’s more about taking the elemental plot and transcribing it a little bit.

Like how you would take a melody and transcribe it into a new key to mean something different thematically and perhaps even be in a different genre than the original Goodnight Mommy. We got kind of excited about that. And it means something different thinking about ways that we could take a theme that he and I were very interested in, which is the human tendency to want to see ourselves as the hero or the victim of our own life story and our inability to see ourselves as the villain, see if we could take that theme and make this plot of the original film, reshape it to foreground that theme.

So then I called the Animal Kingdom folks back and said, “I am interested, but I have a different sort of idea about what the story could be about. So let me pitch you this new story and see if you’re interested.”

DC: So Kyle, who ended up being the writer, did he come on with you as the writer of the script after you guys had talked about the film?

MS: Yeah. Well, they came to me originally, but then I pitched them Kyle and we came on together.

DC: That’s awesome. I was curious about the relationship between the writer and you with a remake like this. So you were very close.

MS: I would say that and I hope that he wouldn’t get mad at me for saying this, but we kind of wrote it and directed it together. It wasn’t like I was the director, and he was the writer. I participated in the development process about as much as he participated in the directing process. He was there every day. We were a team.

DC: That’s awesome. And so what was it like working with Naomi Watts obviously? But also Cameron and Nicholas are twins who are on screen for almost the entire movie. And also they’re doing some pretty awful things. I’m always curious about what it’s like working with children in these scenarios.

MS: I have, for reasons that I can’t quite figure out, only ever made films with that star children. I don’t do it on purpose, I really don’t. But I came prepared with a whole bunch of ideas about ways to work with children and some alternative methods. And I really, honestly, did not need to use a single one of them with the twins. They were so professional. They shocked Naomi actually to be perfectly honest.

There’s some pretty heavy material near the end of the film for Cameron specifically. And we had to shoot that sequence over three days, The way that he was able to on day two and day three of that sequence, get himself quickly back into the emotional place that he would’ve been, as if he had just experienced the material that we shot minutes before. That’s a very difficult thing for an actor to do. And that’s a very difficult thing for an adult actor to do. The way that he was able to do it, really shocked me and Naomi. So I did not treat them differently than I would’ve treated anybody else. I wish I could say that it was me, but it was not.

DC: That’s amazing. A lot of your work is pretty surreal. It’s kind of weird. I love that. What draws you to kind of surreal horror genre stuff?

MS: It’s complicated. I don’t know if I would say I’m necessarily drawn to horror. In fact, I would classify this movie as a psychological thriller slash drama.

DC: I have a question for you there. What to you is the difference between a psychological thriller and a horror, I feel that the line is so thin. So how do you distinguish between the two?

MS: That’s a good question. I mean, I find what goes on inside people’s minds to be quite horrifying. There’s not a lot of jump scares in [Goodnight Mommy] and there’s not a lot, you know, of the things that you might like traditionally associate with horror films. But there’s quite a lot of trying to figure out the kind of suspense that’s created because you are unsure about what’s going on inside someone’s mind. A lot of the suspense is created by the looming question, why is this woman acting this way? I would call that a psychological thriller.

A few years back, I made a film called Take Me To The River, which I would also say is more of a psychological thriller than it is a horror. But it’s kind of structured like a horror film. And I don’t really really think about what exactly is the genre of this. It was just sort of intuitive, what seemed right and interesting to me. Although I do really like films that let the horror play out in scenarios where you would not normally expect horror to play out.

DC: Do you remember the first horror movie you ever saw?

MS: Oh, God, I don’t. I mean, first horror movie I ever saw. Maybe it was Scream. I remember having really bad nightmares about Scream and just being unable to sleep and needing my parents to come and talk me through it. And yeah, <laugh>

DC: I had a very similar experience with Scream.

MS: Before that, this is not really a horror movie, but The Good Son with Macaulay Culkin. I was so scared by that movie. That’s maybe more of a psychological thriller though. Because that’s all about what is this boy capable of.

DC: Yeah, it’s horrifying. That movie scarred me so much when I saw it as a kid. I had a stepbrother, so I was like, oh my God, it’s gonna happen to us. So yeah, that movie got into my head.

MS: I think that real human beings are some of the most horrifying and potentially terrifying things in the world. So I don’t know if like I personally need monsters to be scared cause I’m pretty scared of people. <laugh>

DC: That’s a very good point. People are terrifying. <laugh> Then my final question for you is how closely did you work with the original Goodnight Mommy directors, Veronica and Severin on this film? I know there are producers and I’m just curious what that collaboration was like.

MS: Kyle and had dinner together with them in LA once. We got very drunk and we talked a lot about like their process on the original and the reason why we thought that a remake was warranted. They said, “we just wanted to come here and make sure that you were taking this project seriously. And that it wasn’t just like a paycheck for you guys. We worked very hard on the original and we’re serious people, and we can tell that you’re serious people and that you’re not phoning it in. Now just go do it.”

They were super into the idea that we were gonna run off in a new direction. So I’d say we had a one real close night together and then it was like, bye, we’ll see you later. We didn’t interact all that much. I’ve felt their support in their absence because the last thing that you want is that like someone looming over your shoulder. And they didn’t do that at all. I think that they really appreciated the idea that we were gonna do something that was our own. They kind of wanted that to happen.