‘All Jacked Up And Full of Worms’ Is A Nasty, Disturbing Nightmare [Fantasia 2022 Review] 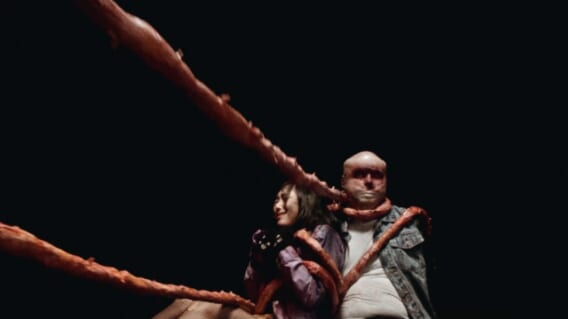 I know that editor’s note doesn’t necessarily inspire confidence in readers that All Jacked Up And Full Of Worms is for them. And quite honestly, it probably won’t be because
Alex Phillips’ film, which had its world premiere at the 25th Fantasia Film Festival isn’t meant to please audiences. It’s meant to nauseate them, upset them, make them want to turn away in disgust. Phillips is channeling the work of Todd Solondz through his own psychedelic lens that burrows and tunnels its way into your brain.

In the world of All Jacked Up, seemingly normal earthworms produce a massive psychedelic trip when eaten or snorted. Benny (Trevor Dawkins), a lonely weirdo who just wants to be a dad, comes into some worms from a sex worker at a local rundown love hotel. There, he meets motel employee Roscoe (Phillip Andre Botello) whose relationship is falling apart. Together, they do worms to just feel something.

From that first worm, Roscoe and Benny are off to the nasty races as they slurp up worms like spaghetti noodles. It is truly repulsive. The worms themselves aren’t visually anything special; they’re just earthworms. But the spectacle created around their consumptions makes them stomach-churning.

As Roscoe and Benny continue their weird trip, they meet up with two serial killers Biff, whose face is painted like a clown, and his girlfriend. They’re obsessed with worms, too, and will do anything to get them. And when they’re high, they have zero inhibitions. This takes their trip to another violent, destructive level that puts all four of them on a highway straight to hell.

Each character in All Jacked Up is, to put it bluntly, unbearable. Remember when I said Benny wants to be a dad? Well, to help him prepare for that dream, he purchases a baby doll. Not just any baby doll. But a sex toy baby doll. From the first glimpse, it’s deeply upsetting and it just gets worse. The implications are quite obviously horrendous and it’s more sickening then men snorting worms. Now, depicting taboos on screen is important; filmmakers should be able to explore the darker sides of humanity. But, as cliche as it is, great power comes with great responsibility. Transgressive cinema needs to say something, and with the doll, Phillips isn’t really saying anything. Instead this storyline exists to upset us and show us that Benny is just an all-around bad guy.

And that could have been what the film is trying to portray if the end of the film didn’t try to humanize and create empathy around his character. There’s no character growth or change in him; he just gets high and stumbles into a bad situation. I do commend Phillips for taking that leap into disturbing and transgressive cinema, that kind of risk takes courage. It’s just unfortunate that moments like this exist just to get the biggest reaction.

All Jacked Up is, at its core, a crusty buddy comedy stepped in worms, blood, and vomit. It’s one of the most uncomfortable viewing experiences I’ve had all year and it’s a film I’m still processing days after watching it. It’s not a movie that really wants you to like it. Rather, it’s a film that wants to challenge you with its imagery. Unfortunately those images sometimes exist solely to shock rather than say anything of merit. Fans of extreme and bizarre horror will dig this slippery nightmare. It’s sure to become a gross-out classic that’ll have audiences talking for years to come.

Transgressive, upsetting, and disturbing, ‘All Jacked Up And Full Of Worms’ is a slippery nightmare that tries a little too hard to be disgusting.

Share:
Tags: All Jacked Up And Full Of Worms Fantasia 2022